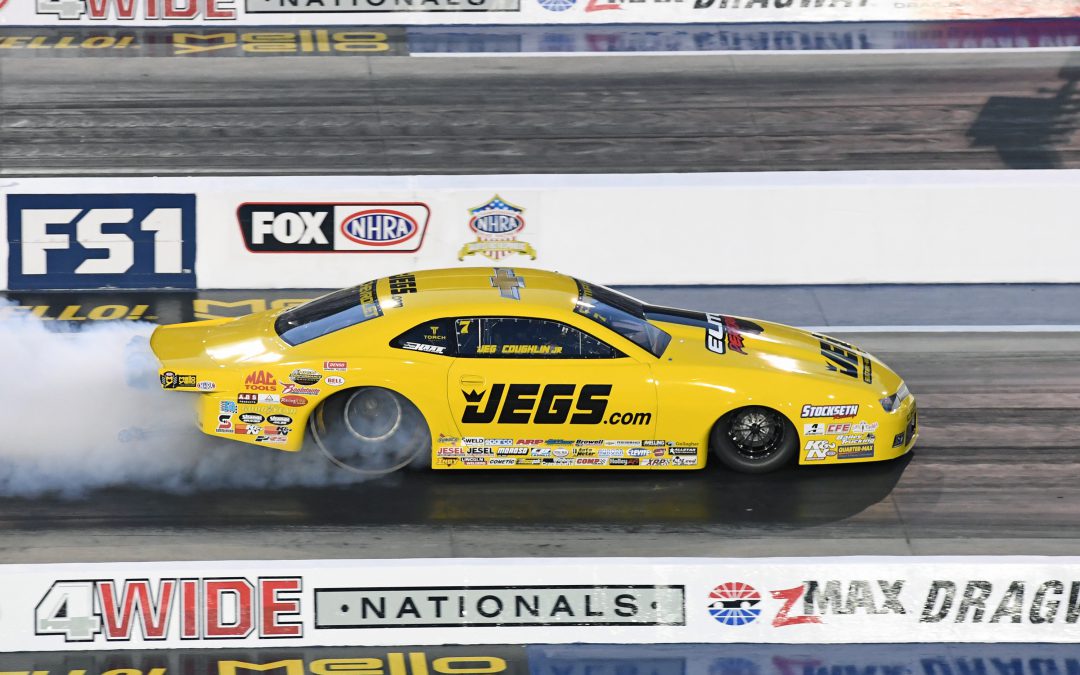 ATLANTA (MAY 1) — The last three NHRA races have all ended with a Pro Stock winner that hails from the championship-winning Elite Motorsports team. Jeg Coughlin Jr., driver of the JEGS.com/Elite Performance Chevrolet Camaro, hopes to keep that streak alive, and start one of his own, by winning this weekend's 38th annual NHRA Southern Nationals powered by Mello Yello.

"The Elite team has certainly found its stride and it's been great to see my teammates win the last three races," Coughlin said. "We definitely want to get involved in the fun and with the way our car has been running lately, we have a high level of excitement in this pit. Bottom line, you have to be near-perfect to win a race in this class. We're ready."

Since switching to a new car, his third of the season, after the Las Vegas race, Coughlin has suddenly jumped into the fray the last two weekends, qualifying in the top half of the field at races in Houston and Charlotte and racing to the semifinal round in both events.

"We've all stepped up," Coughlin said. "Vincent (Nobile) won Vegas, Matt Hartford beat Erica (Enders) in Houston, then Erica beat Vincent and two others at the Four-Wides this past weekend. Obviously, our Elite crew chiefs — Rick and Rickie Jones, Mark Ingersoll, and Brian 'Lump' Self — have figured some things out and the crew guys on each car are executing very well. It feels so good to have competitive cars."

Joining Coughlin at Atlanta Dragway this weekend will be his wife Samantha and nephew Troy Jr. Coming off a Round 2 finish in Charlotte, Samantha will be competing in her second race of the year in Super Gas, while Troy Jr. will continue his evolution in the JEGS.com/McPhillips Racing Top Alcohol Dragster. Troy Jr. raced to the semifinals in North Carolina.

"Atlanta is going to be a great race for Team JEGS and McPhillips Racing," Troy Jr. said. "We have a lot of good data from the past two weekends and we are prepared to make seven great attempts at the track. Rich (McPhillips, owner/tuner) and the boys work so hard to keep this dragster competitive and it's time to get the checkers for them."

As usual, the reach of Team JEGS goes beyond the borders of one racetrack. While Jeg Jr., Samantha and Troy Jr. are fighting for trophies in Atlanta, Mike Coughlin and Paige Coughlin will be racing at the Division 3 opener at National Trail Raceway in Hebron, Ohio.

In Dover, Delaware, meanwhile, Cody Coughlin will be driving the JEGS.com Chevrolet in the JEGS 200 NASCAR Camping World Truck Series event in Dover, Delaware. The JEGS 200 marks the first title sponsorship for the company in the Truck Series, and with thousands of parts available at JEGS.com for competitors from every form of racing, it's sure to be a big weekend for the 58-year-old company.

"It's great when so many of us are racing and we'll be burning up the phone lines with texts and calls, I'm sure," Jeg Jr. said. "We like to keep up with each other and offer encouragement when we can. It keeps us close and that's the way we like it."