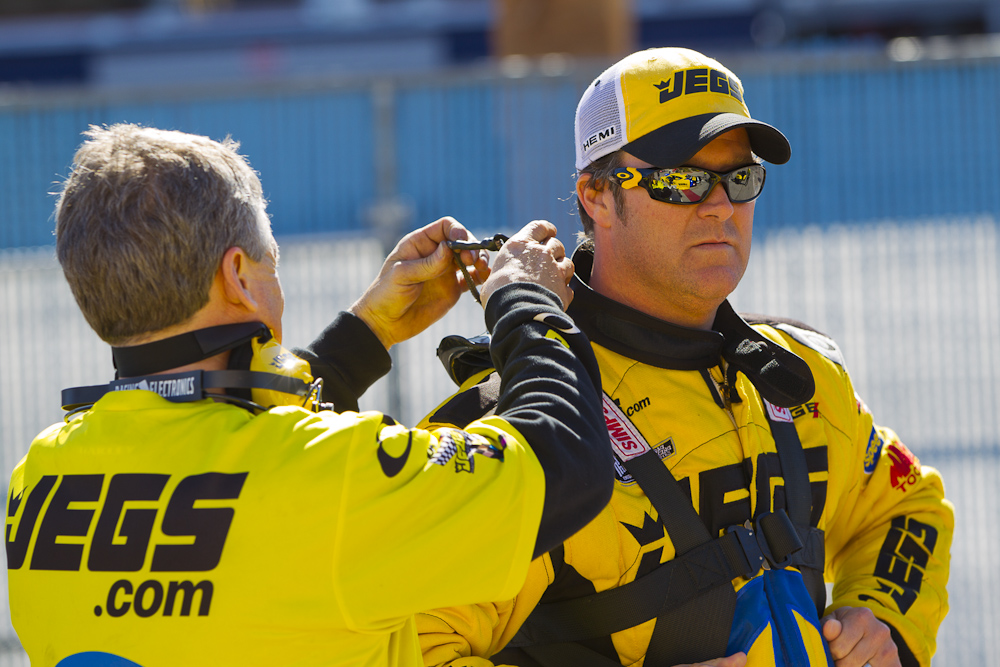 DALLAS (Sept. 22) – Jeg Coughlin Jr.'s qualifying days in the JEGS/Mopar Dodge Avenger at the AAA Texas NHRA Fall Nationals can be summed up with one word: Consistent.

"We've been running right where we wound up qualifying," Coughlin said. "We were 11th the first session, moved up to 10th in the second, stayed there Saturday and ended up qualifying there."

"We changed motors going into Q4," Coughlin said. "We just weren't happy with the way the back half of the runs were looking in Q2 and Q3. We didn't get a great start in Q4 but it ran really well from then on."

In Sunday's first round, Coughlin will be paired against fellow Dodge driver V Gaines, who qualified No. 7 with a best pass of 6.578 at 210.83 mph.

"We're going to analyze that Q4 run tonight real good," Coughlin said. "We just want to make sure there weren't any major issues with the engine on why it didn't want to accelerate when I let the cutch out on the starting line."

He said the issue will be a pretty simple fix.

"It was the first run on the motor since it's been rebuilt," Coughlin said. "Typically the second run is happier than the first. Whatever it is, we'll get to the bottom of it and be ready for tomorrow."

One factor the Team JEGS Pro Stock crew will be ready for is another blast of summer-like heat as the day wears on.

"It's been calling for the low 90s in the area all weekend," Coughlin said. "Then it's usually a couple of degrees hotter at the racetrack with all the asphalt, the rigs, people, engines and Lord knows what else.

"We were prepared for it and tomorrow if goes as forecasted it might be a couple of degrees cooler. That will change the ball game a little tomorrow, but we're mentally ready for it."

Eliminations at the AAA Texas NHRA Fall Nationals get under way at 11 a.m. EDT from Texas Motorplex.