Jeg Coughlin Jr. hoping to back up No. 1 qualifier with Pro Stock victory 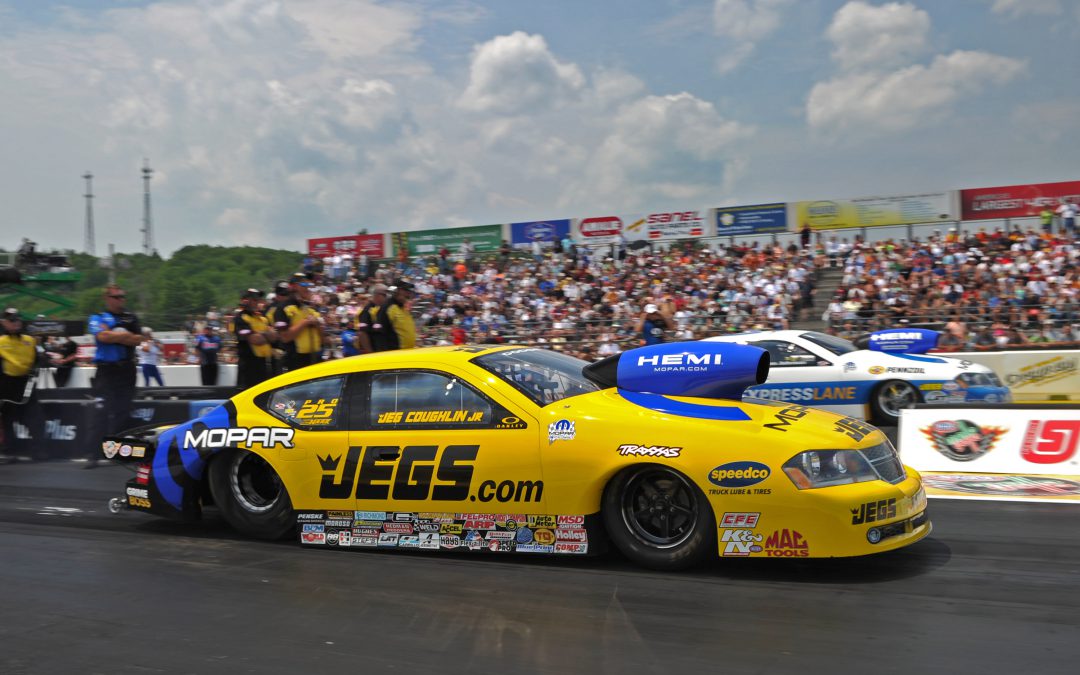 EPPING, N.H. (June 22) – The NHRA New England Nationals at New England Dragway have started well for JEGS.com/Mopar Dodge Avenger driver Jeg Coughlin Jr., as he earned the No. 1 qualifying position in Pro Stock. Could a victory on his birthday be close behind?

Coughlin, who turns 43 on Sunday, wrapped up his second No. 1 qualifier of the season and 19th of his brilliant career when the Pro Stock competition couldn't top his run of 6.533 seconds at 212.43 mph on a warmer Saturday.

"I owe a lot to the entire team, not only the JEGS.com team but also everyone on the Mopar team as well," Coughlin said of J&J Racing teammate Allen Johnson. "Jim Yates, Mark Ingersall, Roy Johnson, the whole team has done a great job in providing horsepower, providing the platform for us to get out there and do what we love to do. I feel fortunate to have a great team in my corner."

Coughlin hoped to lower his elapsed time from Friday, but the weather wouldn't cooperate.

"But as it turned out, right about 11 o'clock, the clouds lifted, the sun came out, and it was not so forgiving. The air got really warm really quick."

"We were low for that third session," Coughlin said. "We tried a few different things, worked on a new set of tires in Q4, so we didn't make that great of a run. We were third-fastest out of the whole pack, so we were pretty happy with that. We will be ready for eliminations and game day tomorrow.

"This was just a teaser for us to get ready for game day tomorrow. I think the strong team will survive, and I'm obviously comfortable with our group."

Coughlin is second in the Pro Stock points standings, with one victory and three-final round appearances in his first season at J&J Racing.

"We've had a really good season," Coughlin said. "Allen and I are 2-3 in the points coming into the Epping race here, so there's only one team happier as a whole. We're really looking for that stride to carry us through the summer and the Countdown and make a strong effort at keeping the world championship in the J&J camp."