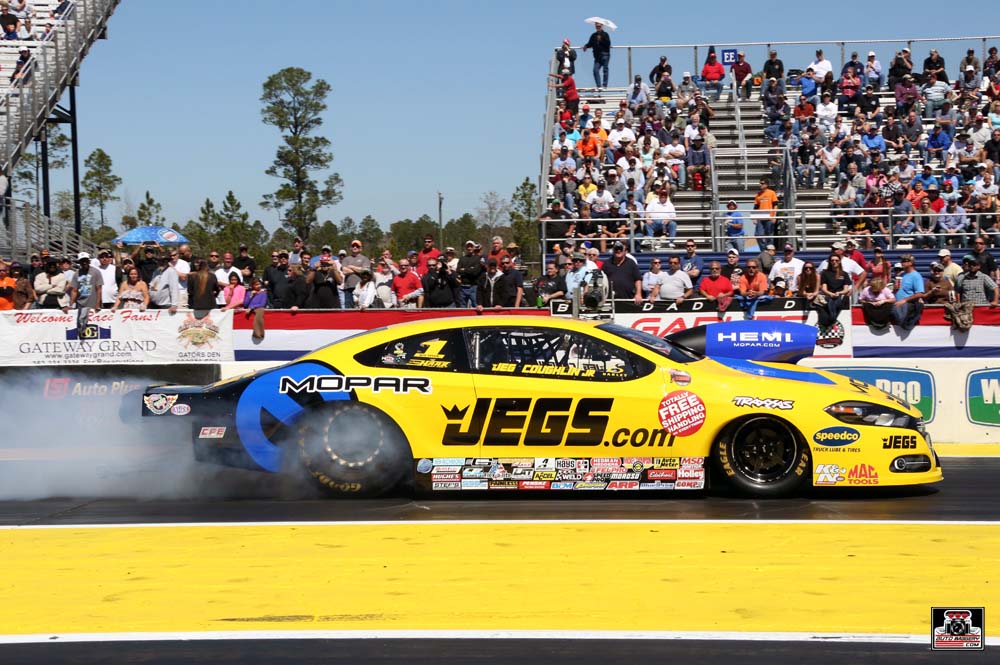 GAINESVILLE, Fla. (March 15) – When JEGS.com/Mopar Dodge driver Jeg Coughlin Jr. scripted the opening weekend with his new Dodge Dart race car, it looked a lot like what actually happened in the Amalie Motor Oil NHRA Gatornationals this weekend at Auto-Plus Raceway at Gainesville.

Coughlin qualified No. 3 for the Gatornationals with a career-best elapsed time as well as an eye-popping speed over 214 mph.

"We've really gone pretty close to script," Coughlin said. "We unveiled the new Dodge Dart a couple times this weekend, Thursday morning to the media and Friday to the fans at the race track. What a reception it's had with the fans and with the media. That part's been extremely exciting."

Coughlin and his team were part of the unveiling to the media at Two Tails Ranch in Williston, Fla., on Thursday. Before Q1 here Friday, Coughlin and J&J Racing teammate Allen Johnson took the covers off their cars again for the fans.

"There was a lot of hustling in this last month," Coughlin said. "We had to get the car finished at Jerry Haas (Race Cars), had to get possession of the car, get it painted, getting things re-wired, re-plumbed, just fixing all the nuances of a new car, honestly.

"We they pulled the black cover off of it Friday during the announcement, I'm thinking, 'I hope this things runs well.'"

Coughlin need not have worried. That Q1 pass was 6.484 seconds at 214.69 mph that ended up being his best run of the weekend.

"To go out and run over 214 mph in its very first was really sporty," Coughlin said. "I'm very excited for all the engineers and folks back at SRT in Auburn Hills and for everyone at Mopar and Dodge. They did a great job in designing the new car."

Coughlin's team deserves some credit, from crew chiefs Mark Ingersoll & Adam Hornberger and the rest of the team.

"This is only our third race with Adam Hornberger, but to hear animation in his voice when I went 6.48 at over 214 mph, honestly, I felt like that was a victory right there."

But Coughlin is not satisfied. You don't become a five-time Pro Stock champion and one of the greatest drivers in NHRA history by sitting on your hands. Coughlin faces No. 14 qualifier Rodger Brogdon in the first round of eliminations Sunday, with his sights set on his 57th career Pro Stock victory.

"We've got to be on our best behavior. But I feel like we've got a car and a team that can go the distance tomorrow."