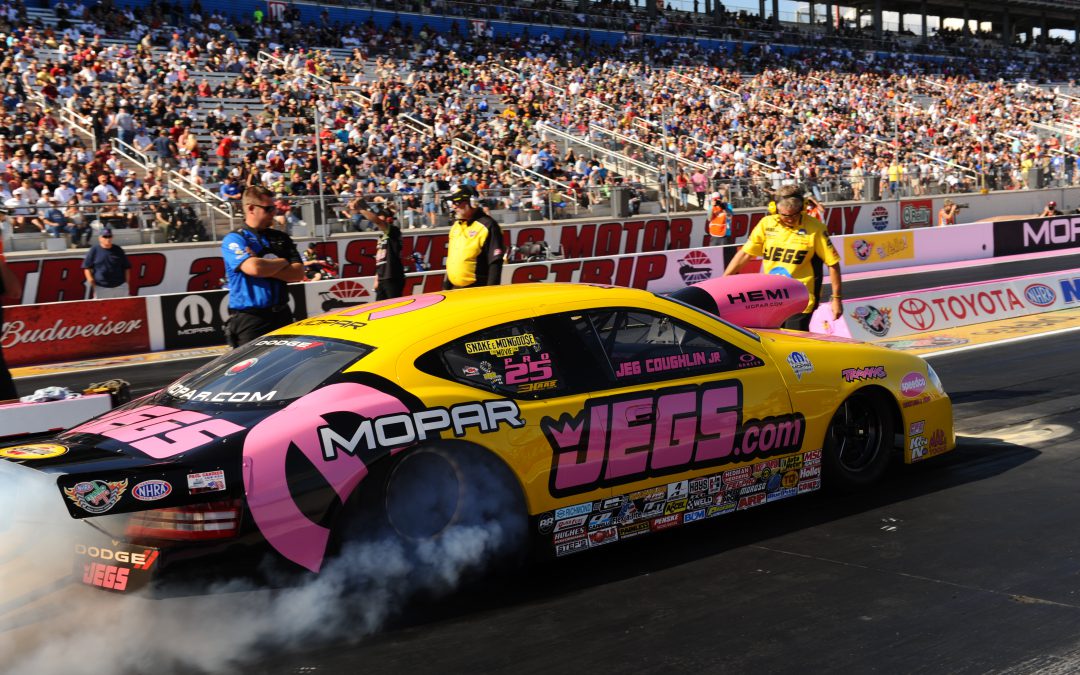 Coughlin came into Vegas with a 45-point edge over Mike Edwards, but he leaves The Strip with a 71-point lead on new second-place driver Jason Line.

"We knew if we could get another round or two in here, we'd be in good shape, but we just didn't make it happen, unfortunately," Coughlin said. "Execution is key, and we just didn't execute today. The team did a hell of a job. We had a great race car and one of the fastest cars all day long."

The normally impeccable Coughlin didn't have his best day in the driver's seat, but he still almost drove the Dodge Avenger to the final round. In the semifinals against V Gaines, Coughlin's car spun the tires, but he reeled it in and continued to chase Gaines.

"That semifinal round, I let the clutch out, and it just took the tire off," Coughlin said. "It wanted to wash around through first gear, through second gear, even into third gear. Man, I was cracking the whip on that thing as hard as I could to get it down there in front of V. I knew it was close. I could hear him, I could see him, but obviously, it just wasn't meant to be."

Coughlin got to Gaines by taking out Erica Enders-Stevens in a crucial second-round matchup. Enders-Stevens was fifth in the points standings, with third-place Jason Line and fourth-place Allen Johnson also losing in Round 2.

"We had a big win over Erica in the second round," Coughlin said. "We left first and never looked back. We had low ET of the round, too. With Line going out that round, that certainly didn't hurt. We didn't want to see our teammate A.J. go out, but he did as well that round."

"We were fortunate to get by Greg Stanfield first round. He made a really nice run and was trying to slam the door on us, but fortunately, we made it through. (Mike) Edwards going out first round certainly helped our cause, no question."

Two NHRA championships were decided Sunday, as John Force clinched his 16th Funny Car title, and Matt Smith won in Pro Stock Motorcycle. Coughlin still has work to do in the season-finale in Pomona, Calif., in two weeks.

"We'll regroup and will have a week off to get all our eggs put back in one basket," Coughlin said. "We'll prepare as well as we can and go to one of our favorite tracks on the tour, and that's Pomona."