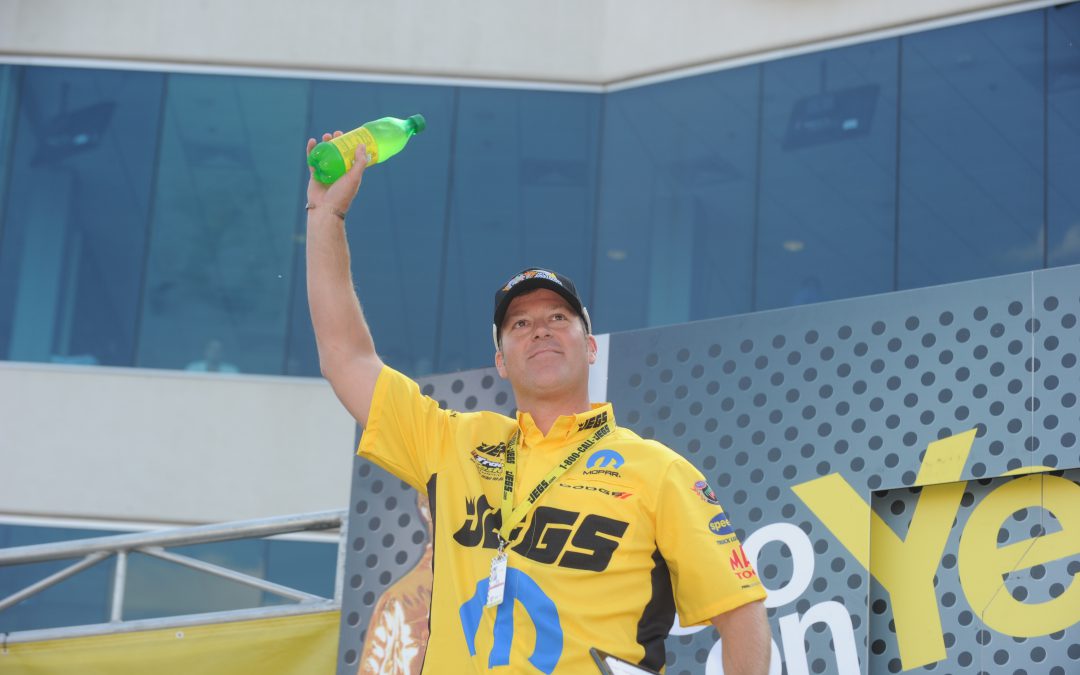 "Coming into the second race of the Countdown, our goal was to come in with a strong game plan and see if we could execute it," Coughlin said. "We were looking for a good qualifying position and a great effort on Sunday."

After two qualifying sessions were rained out Friday, Coughlin snared the No. 10 position for eliminations. That was no obstacle for the four-time champion, as he's the only professional driver in NHRA history to win from all 16 qualifying spots.

Then after Mike Edwards fell to Larry Morgan in the first round, a door opened for Coughlin to take the points lead. He did by winning in the second round, but after Coughlin lost in the semifinals, Jason Line's race victory propelled him to the lead.

"Being 10 points behind the points leader coming into the race, when Mike Edwards went out first round, that gave us an opportunity to make up some ground," Coughlin said. "To bow out in the semis was untimely. We felt like we had a great car, and I felt great behind the wheel."

Coughlin had a .028-second reaction time against Greg Anderson in the first round and an .013 light in the second round against Rickie Jones.

"I just didn't give it enough respect, quite honestly, and I guess that's a wake-up call," said Coughlin, who has a class-record 89 holeshot wins in his brilliant career. "Sometimes you get away with them, and sometimes you don't. Today, we didn't."

Still, Coughlin is second in the points standings, only eight behind Line as the series heads to the AAA Insurance NHRA Midwest Nationals next weekend at Gateway Motorsports Park.

"There's a lot of racing left," Coughlin said, "and we're looking forward to each and every one of them."

Coughlin's day started with a matchup of four-time Pro Stock champions, and after both had identical reaction times, the race was determined by elapsed time. Coughlin's was better, 6.566 seconds at 210.60 mph to Anderson's 6.585 at 210.60 mph.

"We had a monster, monster matchup with Greg Anderson," Coughlin said. "We needed to get by him. He's in this Countdown hunt, as is his teammate and seven others. It was a huge, huge matchup. I knew based on our qualifying effort, the way looked on the graph, the way it felt in my seat, if we could clean this thing up, we could run with him or even outrun him. If you catch Greg, sometimes the first round is the time to do it. We were fortunate to keep the JEGS.com car out front."