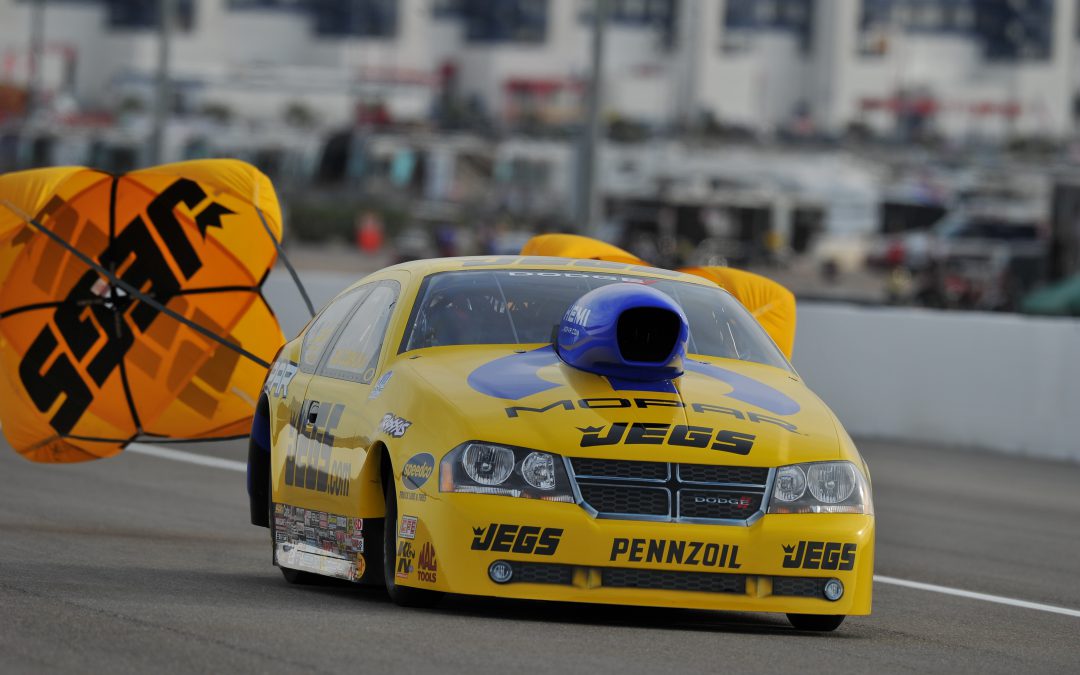 BRAINERD, Min. (Aug 19) – Jeg Coughlin Jr. got an important round win Sunday at the Lucas Oil Nationals, but he and the JEGS/Mopar Dodge Avenger have some more work to do in order to lock up a spot in the NHRA's postseason, the Countdown to the Championship.

Coughlin beat V Gaines in the opening round on Sunday before losing to Pro Stock points leader, Allen Johnson in the second.

"We turned the win light on against V Gaines and that was extremely exciting," Coughlin said. "We just found ourselves a little behind the 8-ball a little bit getting the performance match up to the leading cars."

Against Gaines, Coughlin had the second-best reaction time of the session and won on a hole shot. Although Gaines had the quicker ET (6.570 seconds at 209.52 mph to Coughlin's 6.595 seconds at 209.72 mph), it was Coughlin's .041 second advantage at the starting line that was the difference in the win.

In Round 2 against Johnson, Coughlin enjoyed a healthy .038 second advantage at the line, but his car got squirrely and Johnson drove around him, crossing the finish line in 6.563 seconds at 210.44 mph. Coughlin finished in 6.772 at 189.42 mph.

"He came to us, and we went a little bit to the right," Coughlin said. "It started shaking with the tire and I didn't catch it where I wanted to, and away it went.

"He spotted us a nice lead at the start, which is exactly what we wanted and needed – we just weren't able to capitalize."

Coughlin said the team is focused on breaking back into the top half of the Pro Stock field.

"Right now it seems we're dangling in the slow half of the field," Coughlin said. "We did make four good runs in qualifying, which gave us great data. We were competitive in the first round and were able to turn on the win light.

Coughlin and the JEGS Mopar team will have an intense test session before heading to the Mac Tools U.S. Nationals in two weeks.