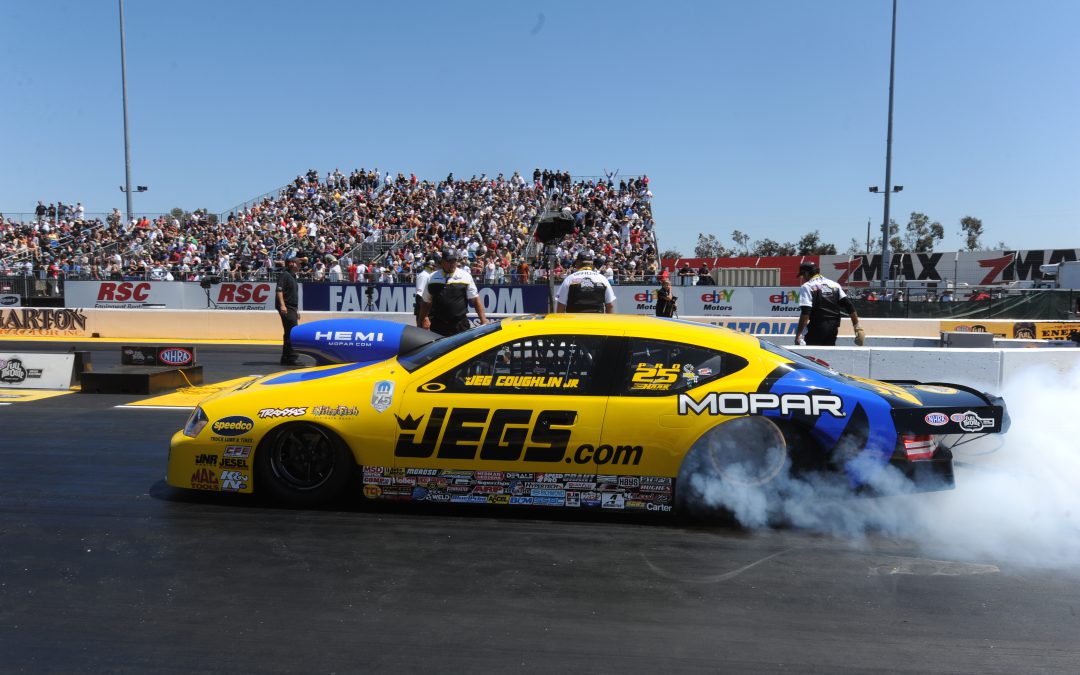 SEATTLE (August 4) – After an up and down two days of qualifying, Jeg Coughlin Jr. and the JEGS/Mopar Dodge Avenger team have a plan of attack for Sunday's Pro Stock eliminations at the O'Reilly Auto Parts NHRA Northwest Nationals at Pacific Raceways.

"At the conclusion of four runs we've learned a couple of things we aren't going to try tomorrow," Coughlin said. "We had two good runs in the right lane, but struggled a little in the preferred left lane. It's just the way it ended up."

Coughlin qualified No. 11 with a best pass of 6.612 seconds at 210.05 mph, and he'll take on No. 6 qualifier Jason Line in the first round. Line qualified with a 6.587 at 210.28. All those times came during Friday's sessions as temperatures soared into the 90s on Saturday, a rarity for the Pacific Northwest. Those hotter than average conditions are expected continue through Sunday.

"We're trying to get the car to pep up a little bit," Coughlin said. "We want to try and get it going better in the first 200 feet. During Q4, which was our warmest track conditions of the weekend, we had one of our more aggressive setups on the weekend.

"We'll study our data and put together a combination that we can build on and go from there."

Coughlin is in a multiple car battle for the last three spots in the Countdown and he said every opportunity to earn points can't be wasted.

"There's a lot on the line the next few races," Coughlin said. "The Countdown is designed for drama, excitement and emotion. There's six or seven of us fighting for three spots. There's going to be a couple of teams not happy at the end of this, but we intend on having our names above that line.

"It's going to be a good fight to the end starting this weekend. We're looking forward to that Countdown."

Eliminations at the O'Reilly Auto Parts NHRA Northwest Nationals get under way at 11 a.m. PDT from Pacific Raceways.