Jeg Coughlin Jr. keeps JEGS.com Avenger off the beach, on top of the charts 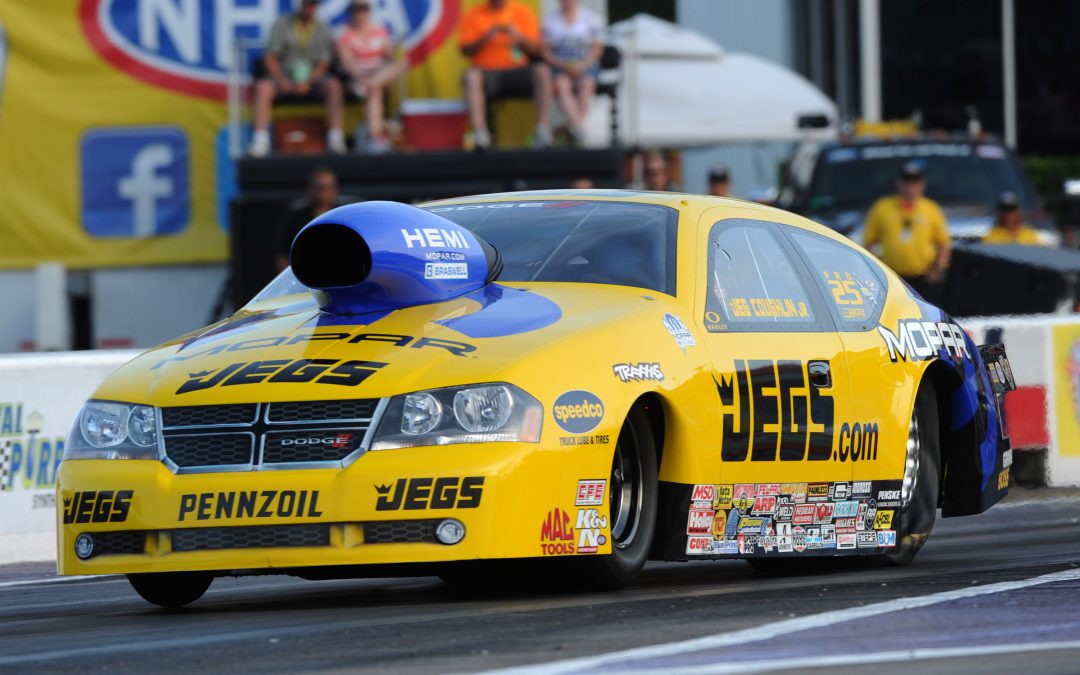 HOUSTON (April 26) – Jeg Coughlin Jr. fended off disaster Friday at the NHRA SpringNationals at Royal Purple Raceway, using a deft touch behind the wheel of the JEGS.com/Mopar Dodge Avenger to end up the provisional No. 1 qualifier in Pro Stock.

From start to finish, Coughlin's pass of 6.569 seconds at 211.20 mph was flawless. It was after the clock stopped that the adventure truly began. Coughlin's parachutes deployed, but didn't blossom. He got on the brakes and got his Avenger slowed, using every inch of the shutdown area rolling to a stop with his front wheels just touching the sand at the end of the track.

"You've got to be ready for anything," Coughlin said. "And to be quite honest with you, I wasn't ready for that. Our parachutes always work and work well. We made a fantastic run, but my attention was quickly called away by just trying to get stopped.

Coughlin said the trick was to slow down quickly but not so quickly that it risked flipping the car over and potentially doing real damage to not only his car, but to the car of Vincent Nobile, who was in the other lane.

"It was wanting to lock up on me a little bit," Coughlin said. "I didn't want it to slide too much. As it got slower I could let it skid a little more than you would at higher speed. That last thing you want to do is tangle a couple of these things.

"There really wasn't any damage to the car. We'll change the front tires because they did skid a little bit. They appear to be fine, but it's cheap insurance to put new front tires on. We'll take a good look at the suspension too, because it was bouncing around pretty hard."

"It's our first time at the top with the JEGS/Mopar Dodge Avenger with J&J horsepower," Coughlin said. "Let me tell you, it feels pretty nice. We're going to do our best to peck away at this thing and see if we can have a better racecar tomorrow."