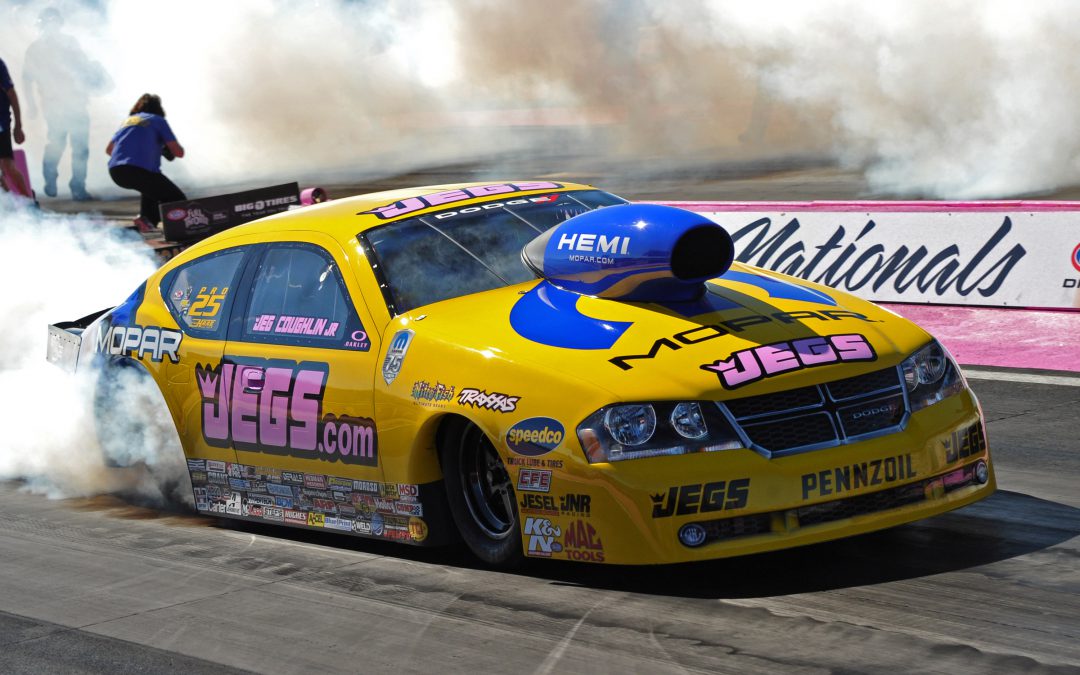 LAS VEGAS (Oct. 28) – Jeg Coughlin Jr. made it to the second round on Sunday at the Big O Tires NHRA Nationals at The Strip at Las Vegas Motor Speedway, ruining an old rival's plans in the process.

Coughlin and the JEGS.com/Mopar Dodge Avenger were paired with Greg Anderson in the first round. For the last couple of races, had been laying back during qualifying to try and get an early matchup against Pro Stock points leader Allen Johnson.

That strategy was working as the winner of the Coughlin-Anderson matchup would indeed get Johnson in the second round, but the lower-seeded Coughlin was not going to be an easy out.

"I was happy with the car for the most part," Coughlin said. "We're running well. We're in the top handful in 60-foot times and lately we're working our way down the page."

Coughlin was out first with a .002 second reaction time to 's .016. The JEGS.com Dodge sailed smoothly down the track as 's car shook just after the hit of the throttle and coasted to the finish line.

Up next was Johnson, a fellow Mopar driver, whose Avenger has been a handful all season long.

"We wanted to win the round and did what we could. Of course he's a big part of this championship scene and we wish him all the best, except for when we're racing him."

The two Dodges left the line in close succession, but Coughlin shot to the right a little off the launch pad and lost momentum before losing the race. Johnson ran a 6.630-second lap at 207.98 mph to Coughlin's 7.020 at 166.60 mph.

"We've still got a lot of homework to do as far as horsepower goes," Coughlin said. "That's not new news to us. We'll get there. I've got a lot of faith in our program. I felt great behind the wheel today and just came up short."

Coughlin said the team might have a new engine combination ready for the season finale in , a place that has historically been Coughlin's personal .

"I'm happy with where the team is today," Coughlin said. "We've not turned on as may win lights as we might have liked to, and we've done a lot of testing. We've made up a little ground.

"We'll go to with a shot to climb as high as seventh in the points. I love , it's one of my favorite tracks. It's just electric there when you go through the gates. I'll be looking forward to that."