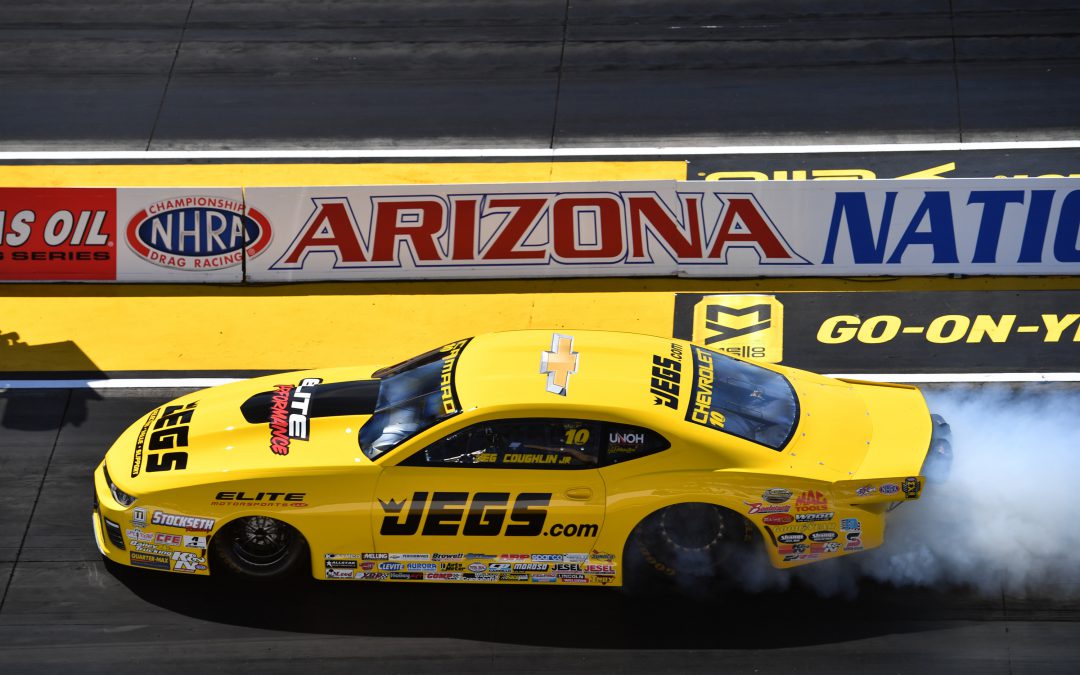 Commanding the controls of the new JEGS.com Elite Motorsports Chevrolet Camaro built by Rick Jones Race Cars, Coughlin qualified in the No. 5 position. His 6.541-second, 211.30-mph run in Saturday's last of four qualifying sessions was his best mark in time trials. He will race No. 12 qualifier Allen Johnson in Round 1 tomorrow.

Coughlin has grown accustomed to racing success in his legendary career as a multi-class wheelman, including two trips to the Pro Stock winner's circle in Phoenix in 2000 and 2009, but he knows success is not easy, especially in the ultra-competitive class where races are won and lost by thousandths of a second. So far, Coughlin is pleased with the numbers the JEGS.com team put on the scoreboard in Q4, their best run since their first attempt on Friday (6.561).

"We've shown extremely strong speed and back-half numbers all weekend," Coughlin said. "We're just trying to get the car, the chassis, the tune-up and everything else to work as one when we start the run. In drag racing, if you mess up any part on the track you want to mess up at the top end, not the launch. I'm not saying we're messing up but we are trying to dial-in a newer combination this weekend.

"We know the JEGS.com car is extremely strong. We are able to capitalize on a three-car team here with Erica (Enders), Vincent (Nobile) and myself and really analyze the data between the three cars. So we'll trying to just keep pecking away at this set-up because as we could see the horsepower numbers were great.

"The pick-up in that last session was pretty exciting. That run wasn't any kind of a prize, as the folks on FOX Sports will see. The car launched and I could feel the front end come up pretty high, which got me driving left toward the center line. I got second gear about that time and the front end was coming down, hitting third gear I was trying to get it back in the groove as quickly and efficiently as possible and not scrub off any ET. I figured at best we'd run probably a high .55 or a .56 and we ran a .54 (6.541). The beauty is we turned out a nice elapsed time with a good speed again and had some left. We'll see if we can't become a little more efficient for tomorrow and pick up the pace."

Coughlin also raced his JEGS.com Super Gas sportsman car in Phoenix. In that category, he reached the second round of eliminations before his 9.898-second pass against Randy Nygaard was too quick for the 9.90 index for the class, which eliminated his entry.

Coughlin's nephew Troy Coughlin Jr. also is in competition in the Arizona desert wielding the 10,000-horsepower SealMaster Toyota Top Fuel dragster fielded by Kalitta Motorsports. Troy Jr. qualified his racer in the No. 6 spot for eliminations. He will match up with No. 11 qualifier Scott Palmer in Round 1.

"I feel like everything is going great thus far," Troy Jr. said. "I keep learning and these SealMaster Toyota men are doing an awesome job on this machine. We are jelling and everything is coming together. It was really exciting to get into the .60's in just my second race and I feel like the SealMaster team has more to show tomorrow."