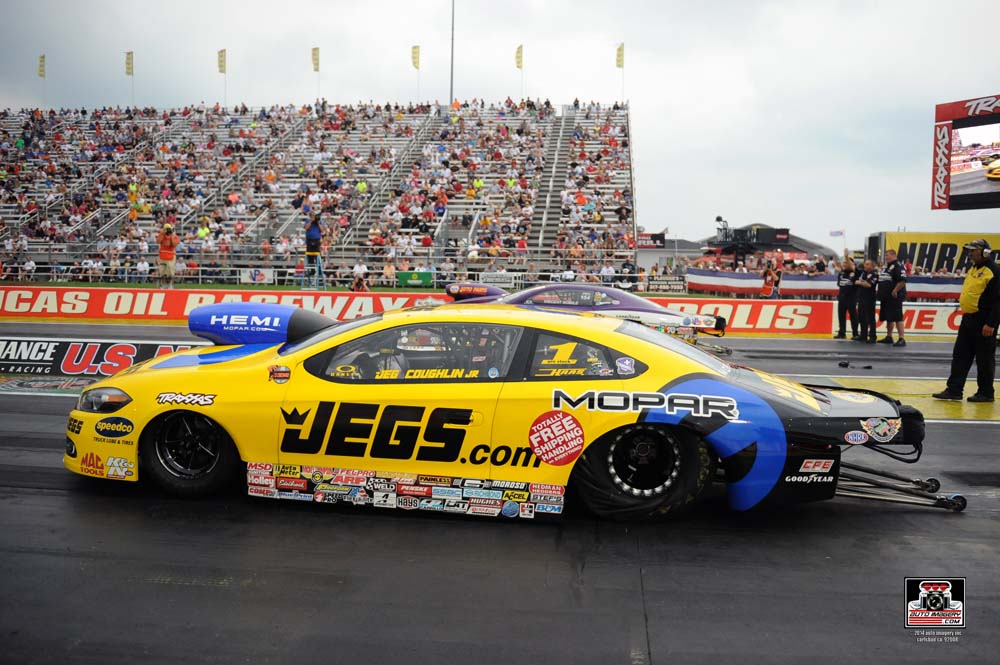 The Lucas Oil Nationals were postponed from Brainerd International Raceway two weeks ago, with Pro Stock running its semifinals and final during qualifying for the U.S. Nationals.

Coughlin knocked off Vincent Nobile in the Brainerd semifinal/third Indy qualifying session with a pass of 6.638 seconds at 207.88 mph. Both were stellar on the Christmas Tree, .012 seconds for Coughlin and ,018 for Nobile, but Nobile trailed the defending Pro Stock champion the whole way, 6.715 seconds at 207.85 mph.

"How about that?" Coughlin said. "We haven't quite got our momentum going. Honestly, going into the round, we made some changes to the car before Q3 and/or the semis for Brainerd. I was very confident things would rebound for us. We were thrilled to see the win light come on. We'll take it."

Coughlin will face Pro Stock points leader Jason Line in the Brainerd final, scheduled for the final qualifying session, Q5. Coughlin and his J&J Racing team will use Q4 on Sunday to improve their car for the final round.

"We've got Q4 in the morning to make a run and see if we can't better our qualifying position for the U.S. Nationals and at the same time give us a big step in the right direction for our tuneup for Q5 and of the final of Brainerd."

Teammate Allen Johnson was a tick quicker, 6.614 seconds at 208.65 mph, and Coughlin's team will try to tune their Dodge Dart from Johnson's tuneup.

"We learned quite a bit off Allen's car there," Coughlin said. "He did take it to a .61, which is a lot closer to the front of the pack than where we were with a .63. We've worked extremely hard, and sometimes you've got to run it out and outlast them."

Older brother Troy Coughlin held the No. 2 position in the NHRA Pro Mod race presented by JEGS.com. His JEGS.com Corvette made one pass Saturday, 5.866 seconds at 248.52 mph, and that came up .003 seconds short of the provisional No. 1 spot.