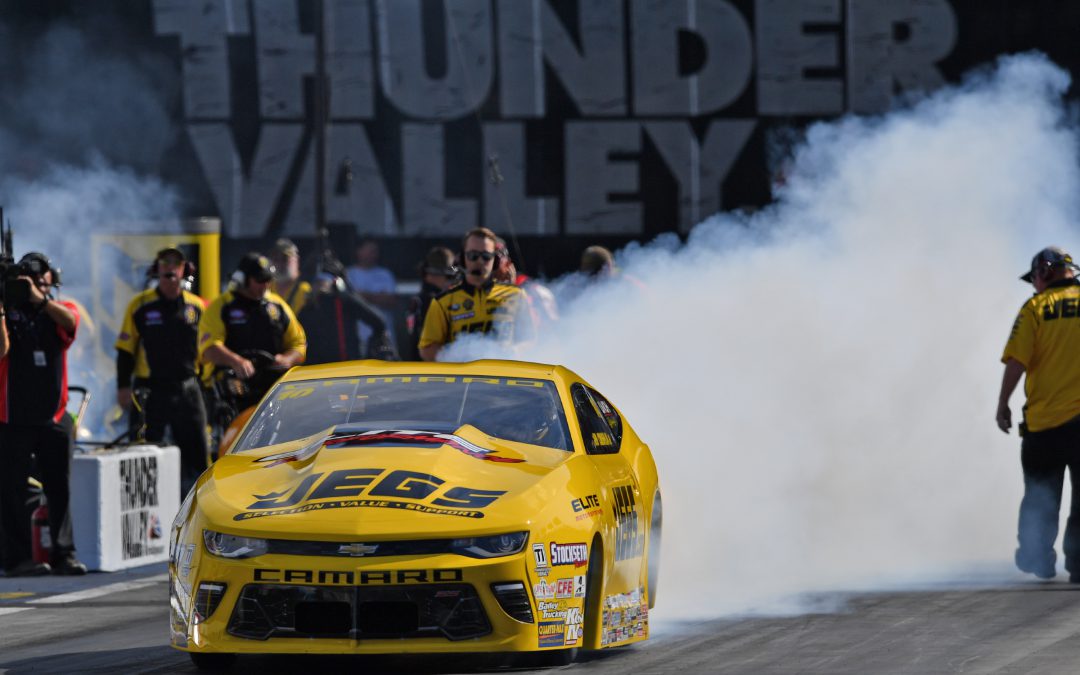 BRISTOL, Tenn. (June 16) — Even with Mother Nature giving all of his rivals a chance at knocking him off his Friday night perch atop the Pro Stock field, 58-time national event winner Jeg Coughlin Jr. was able to secure the 23rd top qualifier award of his illustrious career Saturday night at Bristol Dragway with his previously posted pass of 6.694 seconds at 204.85 mph.

"We were able to get all four qualifying sessions in despite a little bit of a late afternoon rain today," Coughlin said. "I really thought things would pick up a little bit in Q4 but the quickest guy, Bo Butner, went 6.707 and we went 6.708 right next to him so that's probably all there was to get."

Coughlin's run of record in his JEGS.com/Elite Performance Chevrolet Camaro came Friday evening. Because only 13 cars qualified for Bristol, Coughlin has earned a first-round bye. He'll advance to the second round and face the winner of a race between his Elite Motorsports part-time teammate Alex Laughlin (6.740 at 204.54 mph) and local favorite Allen Johnson (6.730 at 205.13 mph) of nearby Greeneville, Tenn.

"We've made four pretty good runs so far," Coughlin said. "In Q3 this morning it spun the tire a little bit midway through low gear but the other three sessions were all pretty nice runs. I think we've got a strong baseline going into Sunday and we'll see if we can't take this thing the distance. Obviously, we'll do this one round at a time, put our best effort forward each time, and try to bring home a Wally."

Less than halfway through the 24-race season, Coughlin is on pace to earn more No. 1 starting spots in a single season than ever before. Bristol marks his third of the year, along with Houston and Charlotte, with his best seasons coming in 2000 and 2007, when he was low qualifier four times. Coughlin has qualified in the top half of the field at all 11 races this year.

"It's been a great season, such a relief after the struggles of 2016," Coughlin said. "Across four race teams, the Elite Motorsports crew is just so strong and it's rewarding for me to see them smiling. Getting low qualifier is a feather in their caps, an indicator that all the hard work they're putting in is all worthwhile.

"No matter what happens tomorrow with me or my brother Troy, who already won his first-round race in Pro Mod and is on to the quarterfinals, as well as his son and my nephew T.J. (Troy Jr.) racing in Top Fuel, it'll be memorable Father's Day. It's a special weekend for all fathers and as children ourselves it's a chance to be thankful to our fathers. It's a proud day as a parent and I would love nothing more than to bring home another big win on such a special day."

Pro Stock eliminations begin at 1 p.m., Sunday. FOX Sports 1 will air all the action at 6:30 p.m., Sunday. (All times are local and subject to change.)