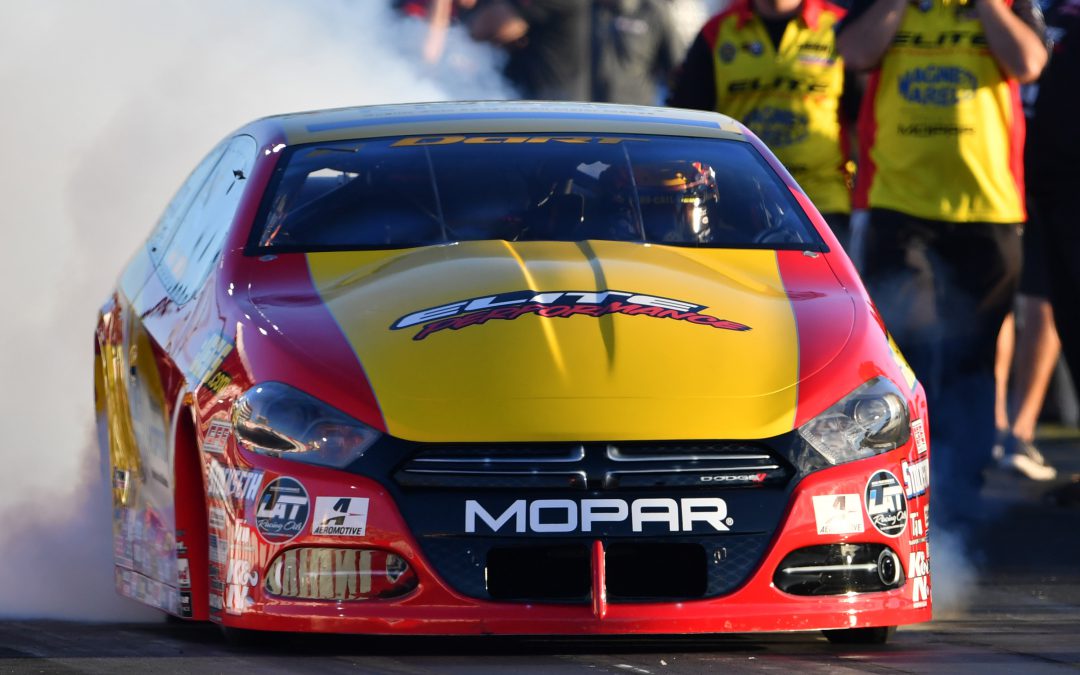 INDIANAPOLIS (Sept. 5) — Five-time Pro Stock world champion Jeg Coughlin Jr. earned the 10th and final position in the Countdown to the Championship playoffs by a slender two points, despite losing in the first round of Monday's 62nd annual U.S. Nationals.

Entering the race just ahead of Gray Motorsports team driver Alex Laughlin and his Gas Monkey Energy Drink hot rod, Coughlin needed to maintain his 10th-place ranking to make the playoffs. But when he lost to Greg Anderson and Laughlin was able to win his first-round race against Kenny Delco, Coughlin's lead over Laughlin shrunk to two markers. The Indy race awards 50 percent more points than other events.

What had Coughlin and everyone at Elite Motorsports concerned was the fact Laughlin was set to race his engine supplier Shane Gray in the quarterfinal round, so it was obvious both teams had plenty of horsepower.

"All these multi-car teams make it where you have circumstances like this pop up from time to time, and certainly with the way Alex has been running all weekend that race could have gone either way," Coughlin said. "I'm happily surprised that Shane pulled off the win because obviously that put us in the playoffs, so we feel as though we got a second chance.

"We didn't do our job against Greg and that put us in the position we were in, and it's not a comfortable place to be. But we did all we can and certainly no one is hanging their heads over here. We're a work in progress, and thankfully that includes a chance at the playoffs now."

Despite having the higher-qualified race car, Anderson wasn't leaving anything to chance against Coughlin as he pushed the Christmas Tree as far as possible, pulling off a perfect .000-second reaction time. That helped Anderson take the race wire to wire with his 6.633 at 208.62 mph in front of Coughlin's 6.696 at 206.61 mph.

"In all honesty, we've had about a 12th-best car all year, and we've tried to polish it up and get it into the top 10, and we did manage to keep it in the top 10 most of the year," Coughlin said. "It is what it is. If we were ranked by effort, we'd be at the top, but obviously we are measured here on horsepower, elapsed times, and race day savvy, and we've lacked that this year.

"I'm not being critical, not being sarcastic; I'm just calling a spade a spade. We've talked about it a lot here within the team, and we're working on different ways to polish our efforts up and give ourselves a better opportunity. We need to make better runs and be more consistent to give ourselves the opportunity to go out and race hard instead of beating ourselves. We probably fell short there, too, but it's all fixable."

Live TV is happening now on the main FOX Network with action from 1 to 4 p.m. ET.

"We've still got six races left in the year, and we've got Erica (Enders, teammate) and I both locked into the Countdown for sure, so we have two horses in this fight, so to speak," Coughlin said. "We'll see if we can't get our act together over here, as she'll be racing for a third world championship and we'll have a chance at winning our sixth."