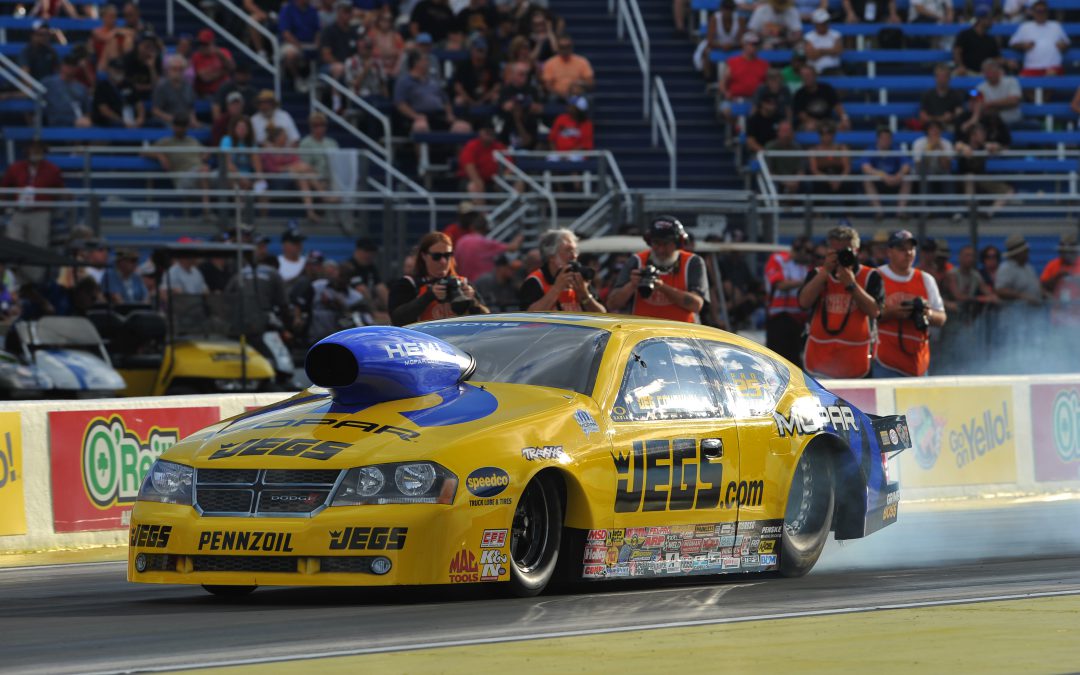 NORWALK, Ohio (July 6) – Nothing would make JEGS.com/Mopar Dodge Avenger driver Jeg Coughlin Jr. happier than to score a victory in his home state.

The Delaware, Ohio, native will gun for his second NHRA Pro Stock victory in a row from the No. 3 qualifying position, having earned that spot Saturday at Norwalk.

"I feel great running here," Coughlin said. "'I love racing at this track. The fans are great, and I have made a lot of runs here in my career. There's nothing more I'd like to do than make four rounds here tomorrow and turn the win light on in the final to boot."

"We have made some good runs here," Coughlin said. "That left lane looks like trouble, and it's typically the preferred lane, and we struggled with the car going left both runs down it. But today’s run in Q3 was a touch better than Q1."

Coughlin shook the tires as the car slipped sideways in the first round of qualifying Friday, but he made solid passes the rest of the weekend. In Q3, Coughlin made a run of 6.633 seconds at 208.91 mph that was fourth-quickest of the session, and then he was No. 3 in Q4 with a pass of 6.658 at 208.17 mph. Neither run was perfect, so to be that fast was encouraging.

"I made a decent poke this morning," Coughlin said. "I was fourth for the session, and that was encouraging given the amount of driving we did. The right lane in Q4 felt like it was on a pretty decent run. About the time I stuffed it in fifth gear it felt like we had a real strong crosswind, and that doesn’t happen very often.

"It started sucking me towards the center line and I was in the right lane. For a second I was thinking, 'This doesn’t feel good.' But I was able to weave through it and ride it out and make a decent run, probably top-five for the session."

Coughlin said the team will reevaluate the tuneup for Sunday to prepare for a shot at another victory.

"We have made some decent laps and have learned what not to do," Coughlin said. "We will regroup and be ready for game day tomorrow."

Eliminations begin at noon. ESPN2 will carry the action.