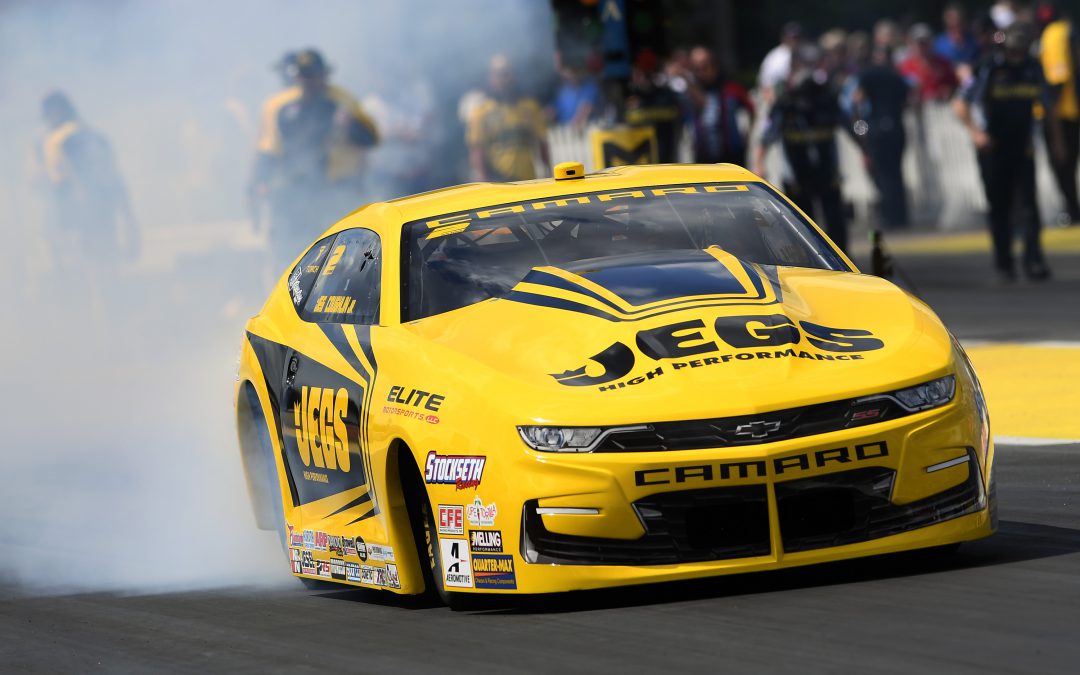 GAINESVILLE, Fla. (March 16) — Fresh off a thrilling victory at the last NHRA tour stop in Phoenix, Jeg Coughlin Jr. is bullish on his chances to repeat the feat with his brand-new RJ Racecars-built Camaro at this weekend's 50th anniversary Amalie Oil Gatornationals.

Coughlin made his quickest and fastest pass of the young season in Saturday's third of four qualifying passes, posting a 6.514 at 211.89 mph in his JEGS.com machine. The run slotted him in the No. 6 position on the elimination grid, setting up a first-round date with Kenny Delco (6.538 at 211.89 mph).

"We made four very respectable runs in this brand-new car so we're pretty happy," said Coughlin, who debuted a new car this race. "We don't have everything perfect just yet, as evidenced by what we've done so far, but the car's real comfortable and we are gathering a ton of data every run.

"It helps that Erica (Enders, teammate) started the year with the same chassis, same RJ Racecars design, so we've been able to learn off her car to get us up to speed. Rickie (Jones, crew chief) has just been trying to peck away a little bit at a time. We definitely are making progress and we are looking to make some more tomorrow on game day."

Coughlin is running a special throwback paint scheme, helmet and uniform this weekend to honor the golden anniversary of the race. The design is a replica of his father, Jeg Coughlin Sr.'s Pro Stock cars from the 1970s. Jeg Sr., who celebrated his 81st birthday Friday, is at the racetrack this weekend.

"Anytime my pop is here it always adds a special element to me," Jeg Jr. said. "He's taught me so much on the race track and off the race track, for that matter, that when he's here it amps me up that much more."

Local forecasts are calling for rain tomorrow but Jeg Jr. is hoping that changes.

"It's calling for a pretty high percentage of rain from midday into the evening but we don't race by the forecast so we will just wait and see what we get," Jeg Jr. said. "Yes, it should be much like today, cloud cover and cool, and that will certainly improve the performances of these naturally-aspirated 500 cubic-inch motors we run so I'm real excited to get elimination day started, whenever that may be."

In other Team JEGS action, Troy Coughlin Jr. lost to Tom Fox Jr. in the first session of Top Alcohol Dragster. Mike Coughlin bowed out early in Top Dragster, losing a double-breakout first-round affair to Mario Boesch. And Samantha Coughlin was edged by Michelle Furr in Round 1 of Super Comp action.