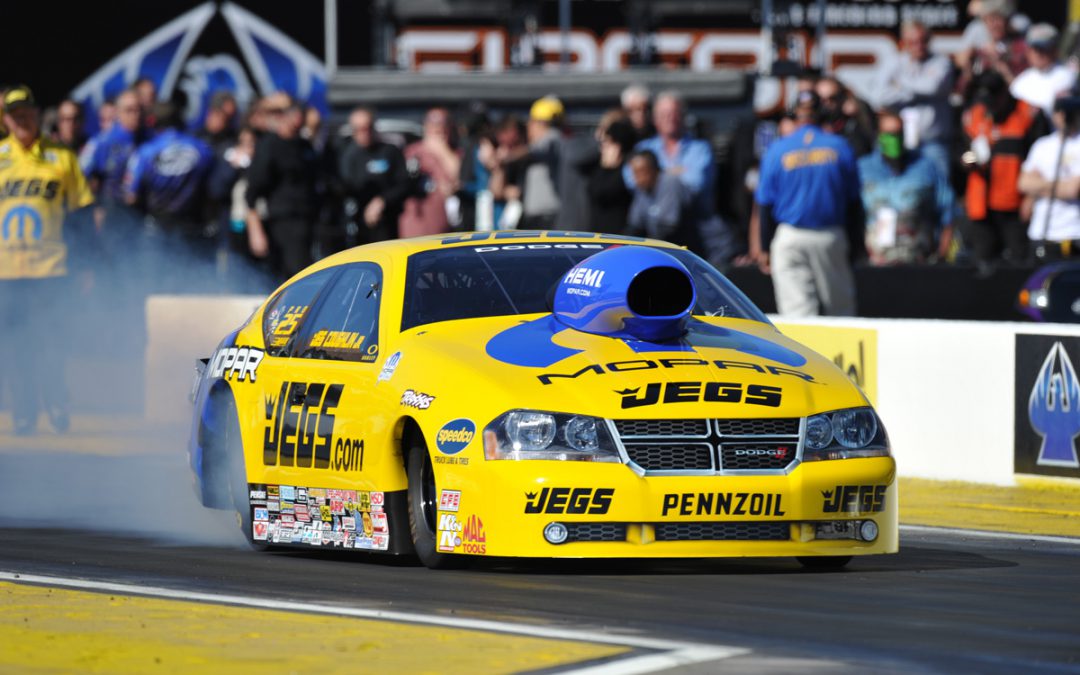 GAINESVILLE, Fla. (March 12) — A strong start to the 2013 season that has him just a round of action out of the Pro Stock points lead coupled with an enviable career record at Gainesville Raceway has five-time world champion Jeg Coughlin Jr. fired up about this weekend's 44th annual Amalie Motor Oil Gatornationals.

"We're ready to race," Coughlin said. "We had a slight issue with the JEGS.com/Mopar Dodge Avenger that kept us from advancing further at the last race in Phoenix but with help from the manufacturer and some hard work by the crew, we've solved that issue and we're looking forward to the weekend."

In two races this year, Coughlin already has a final-round appearance (in Pomona) and sits in fourth place, just 22 points behind early leader Vincent Nobile.

At the Gatornationals, Coughlin is a two-time winner with three more runner-up results in the historic event. He also earned his first No. 1 qualifier at the track back in 1998.

"I can tell you this race gets my blood pumping," Coughlin admitted. "It's the first stop of the year on the East Coast, typically the Pro Stock car count increases by a few good cars and all Lucas Oil East Coast hitters are there in the Sportsman ranks. It's one of the heritage races on the NHRA tour. I know it's been around forever and all the legends have won there. It's just a darn special place and everyone in every class brings there 'A' game."

A racer that always seems to do better when surrounded by family, Coughlin will have lots of close relatives in support, furthering his feeling that good things lie ahead.

"I can't wait to see my brother Troy roll out with that big No. 1 on his Pro Mod car," Coughlin said. "He worked so hard to win that championship last year and I know how proud he is to be sporting that No. 1 on his racecar.

"My nephew Troy Jr. also is racing. I've been helping him out quite a bit with his JEGS.com Super Gas Roadster and Super Comp dragster. He's really doing well. He's anxious to win again. On top of that, my gal Samantha is running Super Comp so we'll have lots to support on the track."

To make absolutely certain their cars are in top form, Coughlin and teammate Allen Johnson will test at Bradenton Raceway on Florida's Gulf Coast.

"We've got a few days to test so we thought we'd take advantage of it," Coughlin said. "Allen's father (Roy, the team's engine builder) has been tinkering with a few things and Mark Ingersoll and Jim Yates have a few items to test out as well so we are looking for more performance. Then we'll head over to Gainesville and get after it."

Qualifying for the NHRA Gatornationals gets under way at 1 p.m. EDT Friday from Auto Plus Raceway and continues at that same time on Saturday. Eliminations start at 11 a.m. on Sunday. ESPN2 will air the qualifying show at 1:30 a.m. EDT on Sunday and the eliminations show at 7 p.m. Sunday evening.