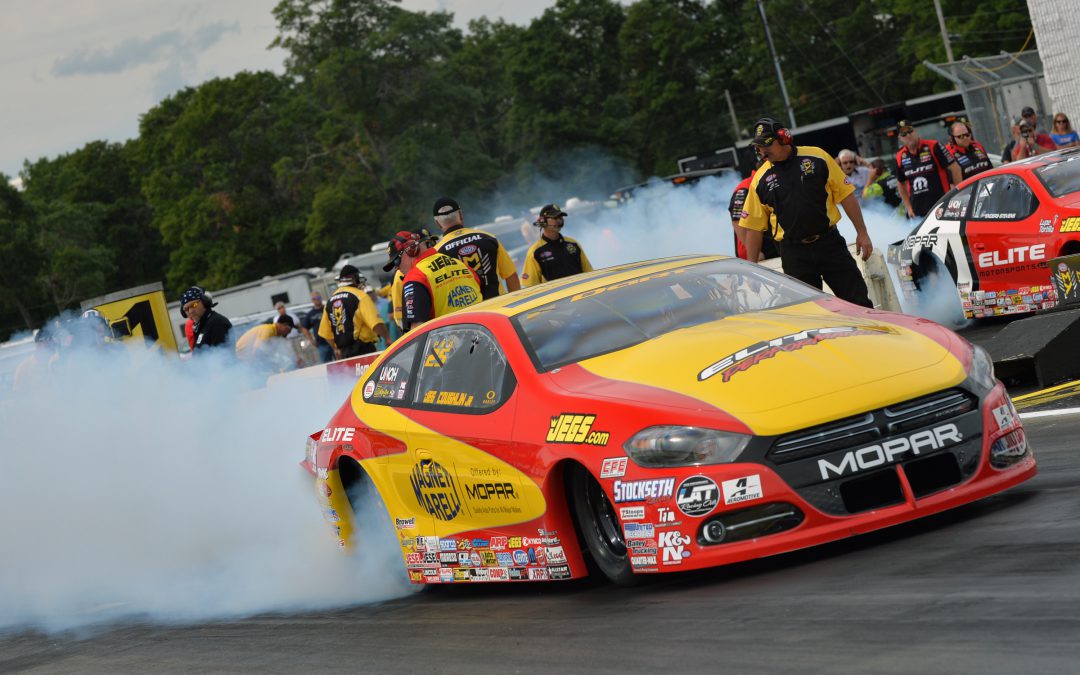 BRAINERD, Minn. (Aug. 20) – Jeg Coughlin Jr. knows there is more speed to be had out of his Magneti Marelli offered by Mopar/JEGS.com Dodge Dart.

And after his run in the fourth qualifying session at the Lucas Oil NHRA Nationals on Saturday at Brainerd International Raceway, Coughlin is getting closer to finding it.

"We didn't show it on the scoreboard, but we should be able to run mid-6.60s," Coughlin said. "But talking about it and doing it are truly two different things. We've convinced ourselves we've got to get our act together and let the scoreboard do the talking the rest of the year."
After a rough day Friday, Coughlin made his best run of the weekend in Saturday's Q4: 6.661 seconds at 206.83 mph to snare the No. 12 qualifying spot for Sunday's eliminations.

"Coming out of Seattle, we came into Q1 on Friday with some great e.t.s," Coughlin said. "We just were lacking some longevity under the hood. The group worked the 10, 12 days between races trying to cure that issue and get everything back up to the best health."

Further engine development and some testing since Seattle left Coughlin and the team hoping for further improvement in Brainerd.

"We felt like we had made some progress based on some testing they did," Coughlin said. "We got here, but the car wasn't real happy, as far as the drivability of it. We ended up banging an engine on my car in Q2 on Friday.

"We made a decent run in the first session. It was extremely aggressive down low, and we knew we left a ton on the table. We were looking forward to Q2. We were on a pretty decent run, but the motor ended up going up in smoke."

The team changed engines for Saturday, but they also change the tuneup on the car, and it resulted in better runs Saturday.

"We changed motors and philosophically changed some things with the way we're running the car," Coughlin said. "The car was very drivable, and I let the clutch out and it went right to the moon – a lot of wheel speed. We didn't expect that, based on how we ran in Q2. So it looks like it wants to accelerate and wants to go, and it looked pretty efficient."