Jeg Coughlin Jr. looks to carve his name into the sides of Bristol’s legendary Thunder Valley 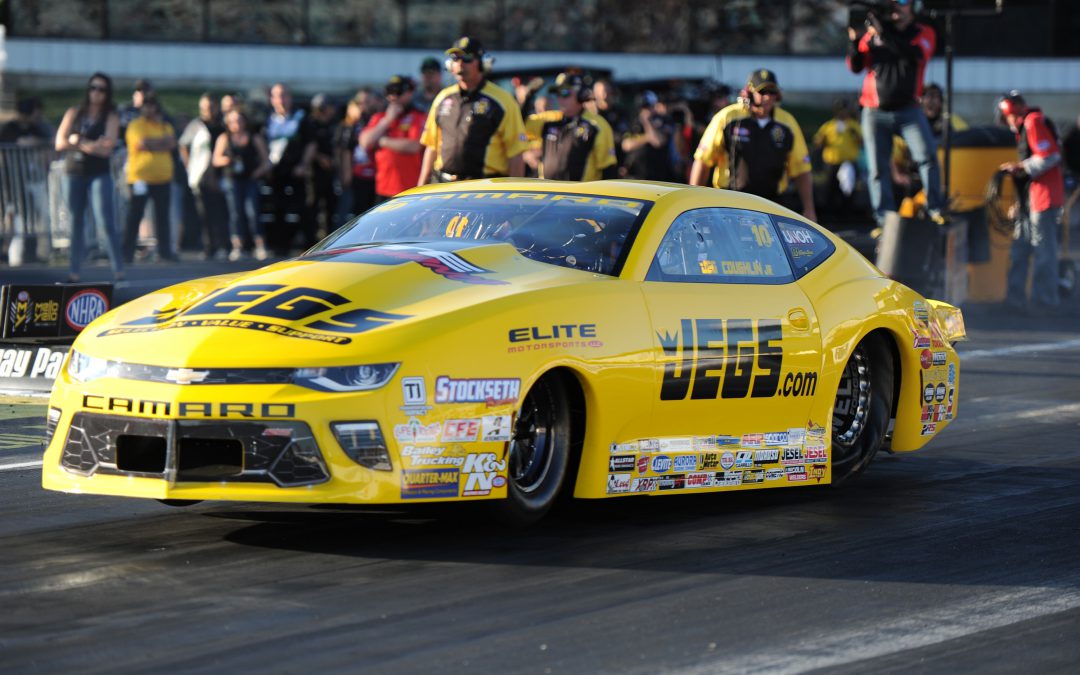 BRISTOL, Tenn. (June 13) – There’s a popular drag strip in the western U.S. planted at the base of the Rocky Mountains. The scene is certainly beautiful although not necessarily fast. There’s another quarter-mile of racing pavement on the opposite side of the continent that is whittled into the ancient, rocky core of the Appalachian Mountains of East Tennessee; it’s beautiful, it’s really fast, and it’s extremely loud.

Jeg Coughlin Jr., driver of the JEGS.com/Elite Performance Chevrolet Camaro Pro Stocker, has a renewed mechanical vigor as he and his team journey into the fastest valley on Earth this weekend for the NHRA Mello Yello Drag Racing Series at Bristol Dragway for the 17th annual NHRA Thunder Valley Nationals.

"Heading into Bristol, the team has been building some pretty good momentum," Coughlin said. "We’ve been working on a new combination we really feel is going to be pretty stellar and should perform really well between the mountains in Bristol.

"I'm really excited to get there. It’s one helluva facility that Bruton Smith has been able to create with his team and it's neat to see him carry on the legacy of the Carrier family, who are still in the area. I really love performing there at Bristol. Just like all of the stops on tour, the fans are fantastic."

The five-time Pro Stock world champion always brings an uncomfortable level of intimidation with him to the starting line, but now that he and his JEGS.com team have his bright yellow hot rod set on kill, his opponents are feeling even more uneasy when they look over into the other lane, maybe even the drivers of the always powerful KB Racing team.

"I feel like we caught up with them (Greg Anderson, Jason Line and Bo Butner of KB Racing) a couple of weeks ago," Coughlin said. "My car is really running on mean. We are qualifying on the pole at times, challenging for race wins, and we've been low ET of the round numerous times. Those things are all indicators you’ve caught up.

"Like I said, we’ve been working with a very optimistic set up and we’re just not quite there yet. As funny as it sounds with all of the experience with all of the crew chiefs and crews on these cars, it still takes laps to sort it out."

Coughlin, a 46-year-old resident of Delaware, Ohio, won the Pro Stock Wally trophy in Bristol in 2007, so he knows what it’s like to visit the vaunted victory circle in the valley, but he also knows the weather in East Tennessee is fickle, and can drastically change in a matter of minutes.

"This race always is a wait-and-see situation as to what the weather’s going to be like," Coughlin said. "It’s usually warm, it can be humid too and we are at some elevation. There's a lot of things going against performance for the Pro Stock cars but God created us all equal with Mother Nature and I’ll put our Elite team up against any of these guys in the pits. I’m really looking forward to hitting the track Friday and seeing if we can’t bring in our first win of the year."

Coughlin will be doing double duty this weekend in Bristol, as he will also be competing in the Lucas Oil Drag Racing Series with his Corvette Roadster in the ultra-competitive Super Gas category.

The Pro Stock racers hit the track Friday with two qualifying sessions at 5 and 7:30 p.m. They return for two more qualifying sessions Saturday at 1 and 3:30 p.m. First round of eliminations began Sunday at 1 p.m. NHRA TV coverage on FOX Sports 1 includes original Bristol programming on Friday at 8 p.m., on Saturday at 11 p.m., and on Sunday at 6:30 p.m. (All times are local and subject to change.)