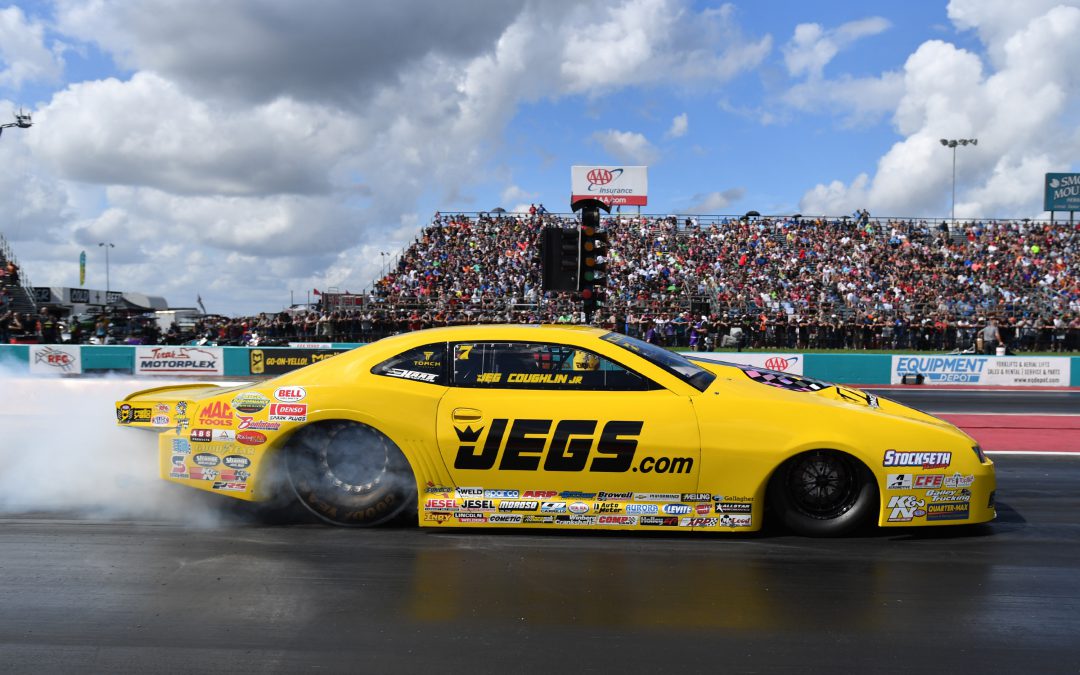 ENNIS, Texas (Oct. 6) — It's hard to argue with the qualifying success Jeg Coughlin Jr. has enjoyed in the first three races of the Countdown to the Championship playoffs. Now if he can only translate his top qualifying efforts into race day wins, he'll be tough to top.

For the second straight race, Coughlin qualified his JEGS.com Elite Performance Chevrolet Camaro at the top of the field. Two races back he was second overall, clearly signifying his car is at the top of the class at the moment. Coughlin now has four No. 1 qualifiers this year and 27 for his career. Those are great numbers, but adding to his career win total of 80 is what he's really after.

"That's the No. 1 item on the agenda," Coughlin said. "The team has been working incredibly hard and we've had a great car. They were hard at it, once again, prepping for this weekend and it shows.

"We executed really well yesterday and today. We had the quickest car in two out of four sessions and now we're sitting here as the No. 1 qualifier again so that's really cool. Tip of the hat to our collection of crew chiefs and crew guys for all their hard work getting us to this point."

All of Coughlin's runs were at least a tenth of a second quicker than his scheduled first-round opponent Val Smeland, who anchored the 16-car field with a 6.747 at 206.35 mph.

"Going into game day, I feel great behind the wheel," Coughlin said. "I'm really looking forward to playing the day out completely. We are looking to make four good runs and hoist that Wally tomorrow night. This team's been working hard for another win and I'd love nothing more than to see their efforts get rewarded at that level."

Coughlin previously won races in Chicago, Bristol, Tenn., and Sonoma, Calif. He's also won at the Texas Motorplex in the past (2002).

In Top Alcohol Dragster action, championship hopeful Troy Coughlin Jr. was upset by Shane Conway in the opening round of eliminations. The lowered-qualified Conway used his best pass of the weekend, a 5.323 at 266.74 mph, to hold-off Troy Jr. and his JEGS.com McPhillips Racing dragster, which posted a 5.352 at 272.23 mph.