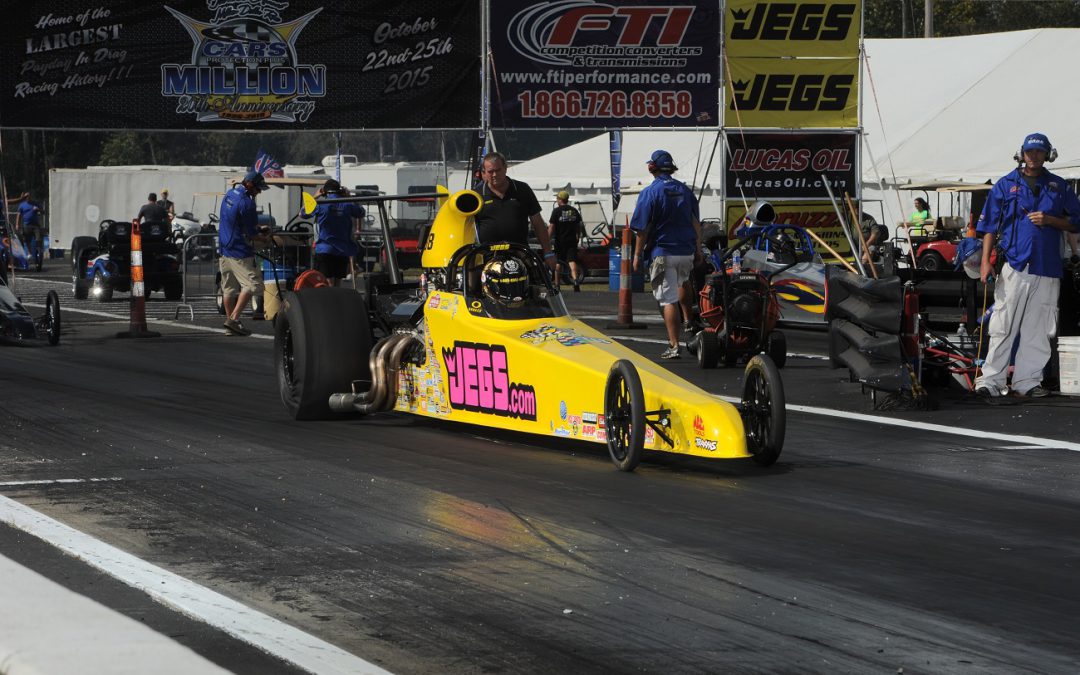 MONTGOMERY, Ala. (Oct. 26) – JEGS.com driver Jeg Coughlin Jr. survived six rounds of the CARS Protection Plus Million Dollar Race at Montgomery Motorsports Park before bowing out in one of the most prestigious bracket events of the season.

In the main event, Coughlin made it down to the final nine cars before red-lighting in the seventh round in his JEGS.com dragster.

"The highlight was getting down to the split, as they call it, where all the money comes in," Coughlin said. "I was very pleased with that, but any racer will tell you that you're always going for the win.

"It just wasn't in the cards this time. After six great runs down the track, I ended up turning it red by a few thousandths. That was not something I envisioned happening there."

Coughlin also raced his JEGS.com Chevy II wagon, but that car went out early Saturday. The wagon raced to round four in the first Triple 25 race Thursday, while the dragster lost in the second round. On Friday, Coughlin's dragster raced to the fifth round, while the wagon fell in round two.

"I wanted to win the races, of course, but I was gaining good track time to be in good shape for Saturday's Million event," Coughlin said.

Sunday, both of Coughlin's cars lost in the first round.

Nephew Troy Coughlin Jr. raced a JEGS.com dragster in the event, but his luck wasn't as good. Troy Jr., a regular in the NHRA Pro Mod Series, went out in the third round Thursday and Friday and in the secomd round Sunday.

"He was driving well, and his car was running well," Jeg Coughlin, Jr said. "He just couldn't get on a roll. These races are so competitive. You could be nearly perfect on the Tree and near perfect on the track and still come up a bit short."

With more than 630 cars racing in the Triple 25s and more than 350 cars in the Million, competition was cutthroat. Four of Jeg Coughlin's defeats were by less than three-thousandths of a second.

Nathan Martin of Fort Worth, Texas, won the Million Dollar Race and a first-place prize of $365,000.

"I was very impressed with the facility," Coughlin said. "Randy and Jenny Folk and all the folks at Montgomery Motorsports Park did a great job, and to pull off an event like this is really stellar. It went off without a hitch."

And that includes finding a place for hundreds of race cars.