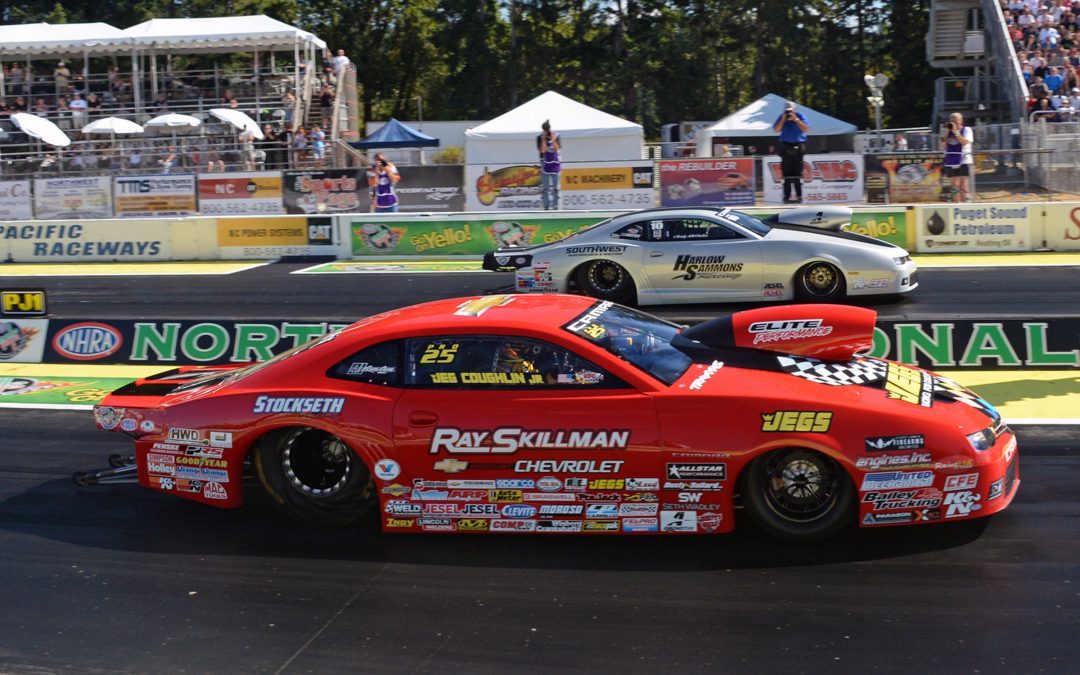 SEATTLE (Aug. 9) — JEGS.com driver Jeg Coughlin Jr. has been a force to be reckoned with in his return to Pro Stock, following up a semifinal finish in Sonoma with a final-round appearance at the NHRA Northwest Nationals on Sunday at Pacific Raceways with the Stockseth Racing/Elite Motorsports Chevrolet.

The final was Coughlin's 100th of his glorious career, though he came just short of winning for the 75th time in NHRA and 59th in Pro Stock.

"We were one round closer," Coughlin said. "We got to our 100th final round and were knocking on the door for that big 75, which would have been pretty sweet."

"I had a great car all day and felt great behind the wheel," Coughlin said. "I was shooting to be .010 to .012 on the Tree, and I thought we could run .51 or .52 in the final. When I let the clutch out, the thing started to go and then just broke the tire loose and started spinning. I was trying to hold it in low gear as long as I could.

"It kind of spun up and then drove down, and then I got it into 2nd gear. I was coercing that thing as best I could; it seemed like it took forever to go through the next three gears and the finish line."

The margin of victory was .014-second, or about 4 feet, as McGaha won his second race in a row.

"You've got to tip your hat to the McGaha group," Coughlin said. "They did one helluva job, and he's driving well. That's what it takes, and they got it done again."

Coughlin nearly got it done after a stellar day behind the wheel. He left first on all four opponents Sunday, starting with a .026-second reaction time in the first round against Aaron Strong. Coughlin pulled away with a pass of 6.500 seconds at 212.56 mph to easily beat Strong's 6.589-second run at 209.01 mph.

"I'm just honored to be the shoe behind this car," Coughlin said. "They're a great group of people, and I've got to thank Mark Stockseth and Richard Freeman, Elite Performance, and the Skillman family for allowing us to utilize their rig.

"It made things very seamless for us in these two races. I was telling (wife) Samantha last night, coming into today, I think I'd made 11 runs with this team but it felt like it was a couple hundred. They made me feel right at home and gave me all the confidence in the world. I think I gave them the same."

Coughlin's next race with the team will be the Chevrolet Performance U.S. Nationals on Sept. 4-7 at Lucas Oil Raceway in Indianapolis.

"Great camaraderie with this team," Coughlin said. "I look forward to having a bit of a break here and then getting back after it at the Big Go."