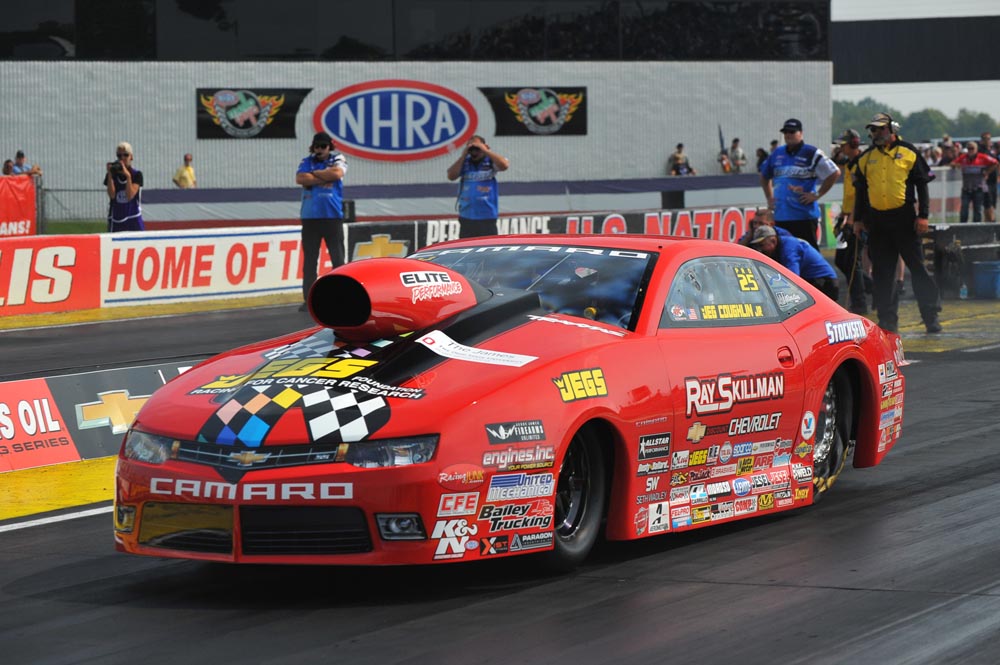 INDIANAPOLIS (Sept. 6) — JEGS.com driver Jeg Coughlin Jr. has won the U.S. Nationals four times, including three in Pro Stock, but all that means is he wants to wheel the Stockseth Racing/Elite Motorsports Chevrolet Camaro to the winner's circle of the 2015 Chevrolet Performance U.S Nationals on Monday at Lucas Oil Raceway.

"We've weathered most of the storm to this point," said Coughlin, who qualified No. 9 on Sunday. "We're down to the final day of the Big Go. That's what we're here for. We want to win Indy. We're going to start from the ninth spot, so it'll be interesting. We'll have our work cut out for us.

"One thing is for sure: This car is capable of running in the top couple, and we're going to continue to make great calls in the pits and drive well. From my standpoint you can see us late on Monday."

Coughlin's best pass this weekend was 6.588 seconds at 209.95 mph, and he's had a consistent race car in the Indiana humidity and heat, with temperatures in the 90s this weekend.

"We've thrown some consistent numbers up on the board, which is exciting," Coughlin said. "What the numbers aren't showing is what we're feeling from behind the wheel and what the computer is telling us.

"We've got quite a bit of opportunity with our hot rod here. I've got faith on (crew chiefs) Rick and Rickie (Jones) and Mark (Ingersoll) and (car owner) Richard Freeman and the whole crew. We're gonna keep going 'til we get it solved or they tell us to go home, one of the two."

Coughlin won Pro Stock at the U.S. Nationals in 2000, 2002, and 2009. He's currently racing a part-time schedule, with Indianapolis circled on the calendar.

"I feel really good from behind the wheel going into tomorrow," Coughlin said. "Three of my four runs have been very nice as far as reaction time goes. The car is driving like a Rick Jones-car does, which is right down the racetrack. They've all done a phenomenal job."