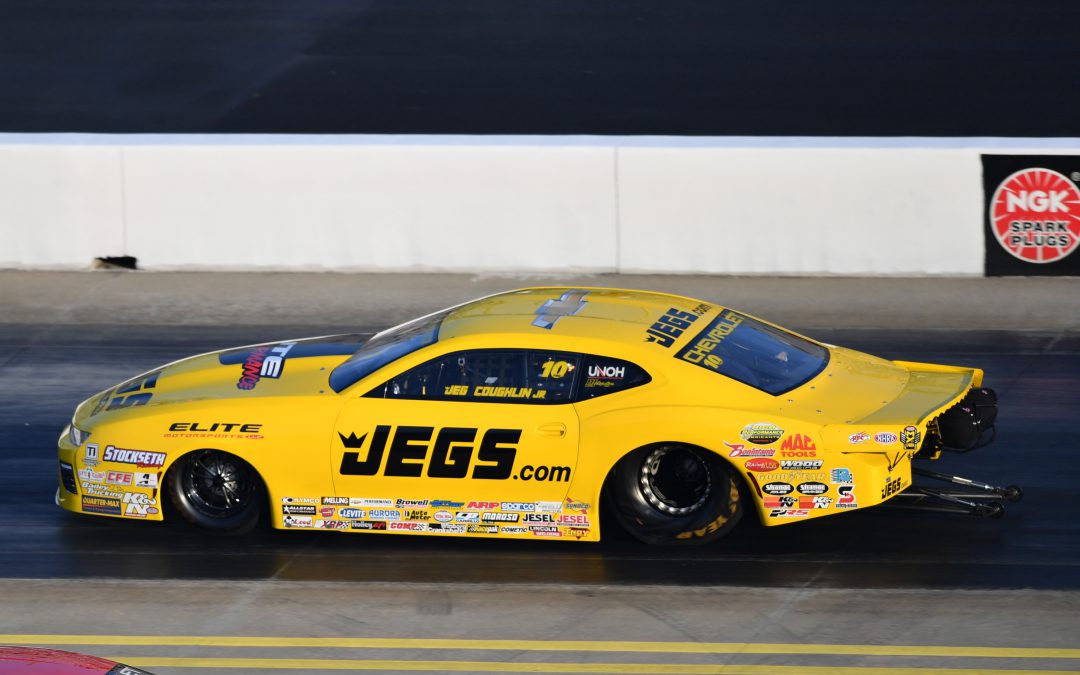 CONCORD, N.C. (April 28) — It's been 10 years since six-time world champion Jeg Coughlin Jr. has qualified on top of the Pro Stock field at consecutive races but the driver of the JEGS.com/Elite Performance Camaro is on the cusp of doing it again should his 6.578-second pass at 210.24 mph from Friday night hold through Saturday's final two qualifying sessions, scheduled to be run in the heat of the day.

"To be No. 1 in both Friday sessions really starts to trump what we accomplished last weekend in Houston," said Coughlin, a 58-time national event winner in the Pro Stock class. "Hopefully, that's a sign of more good things to come. I'm just really pleased that we made two really nice laps today. The guys are working hard and it'll be fun to come out here tomorrow and put a third and then a fourth run together."

After qualifying No. 1 and racing to a runner-up finish in Houston, Coughlin and crew picked up right where they left off this weekend at zMax Dragway, opening with a 6.590 at 210.11 mph in the first session before logging their run of record in the early evening.

"The first run today was pretty smooth," he said. "I was a little aggressive in a couple of the gear changes, which cost us a little performance, but it was still decent.

"In Q2 we went from Lane 1 clear out to Lane 4 and when I let the clutch out the thing wanted to make a left-hand turn on me. It was still accelerating and digging really hard so I made a very stern correction to the right and then a quick counter to snap it back in the groove and it held so I took it down through there.

"I didn't guess we'd improve on the 6.59 from earlier having gone through that early in the second run but, obviously, the air was a little better and the track was better and we were more efficient with the tune-up. I guess I found a fun way down the racetrack, and we were able to stay No. 1."

Jeg isn't the only Coughlin with a No. 1 by his name at this race. Brother Troy was tops in J&A Service Pro Mod Drag Racing Series action after coaxing a 5.770 at 254.95 mph out of his JEGS.com C7 Corvette.

"I'm really proud of my brother Troy taking No. 1 in Pro Mod, especially with the challenges the turbo cars are having in that class in comparison to the supercharged cars," Jeg said. "His son, my nephew Troy, also is running great in Top Fuel and I just got word brother Mike is No. 1 qualifier in Top Dragster at the D3 race in Indy. It's been a great day for the yellow and black and everyone back at JEGS."