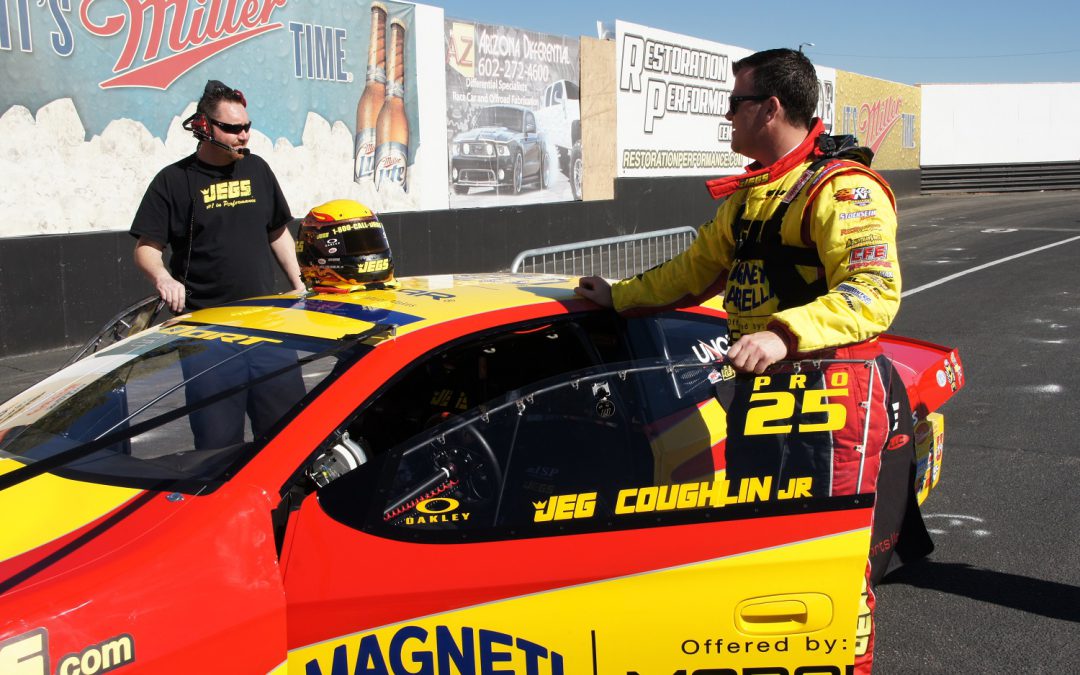 POMONA, Calif. (Feb. 9) — With six world championships and 76 national event titles on his resume, Jeg Coughlin Jr. returns to full-time competition this weekend at the 56th annual Circle K NHRA Winternationals as a bona fide challenger for the Pro Stock trophy at the season-opening race.

While it's true Coughlin only raced three Pro Stock events in 2015 — highlighted by a runner-up finish in Seattle — he remained active in the sport, scoring his first national event "double" with wins in Super Gas and Stock at the JEGS Northern SPORTSnationals in Columbus, Ohio.

This year, Coughlin will race a brand-new Magneti Marelli offered by Mopar/JEGS.com Dart GT out of the powerful Elite Motorsports camp as a factory Dodge teammate to reigning two-time world champion Erica Enders. They will be joined in the Elite pit by Vincent Nobile and current rookie of the year Drew Skillman, who will pilot Chevrolets.

"Having that opportunity to run the three races last year with Elite has really turned out to be beneficial to this new deal," Coughlin said. "At the time, there were no discussions of racing together in 2016 and we had nothing going with Mopar until much later in the year. But having worked together during that time, it made this transition much easier.

"There's a lot going on in Pro Stock and a lot of the teams are outside their comfort zone with the new rules. I think it's exciting to gain new, younger fans with the more production-type finish and appearance of these cars, and the mentality of everyone at Elite is that we are fired up for the massive challenge this year will bring. Like they say, only the strong will survive."

Pomona has been very good to Coughlin in the past. He's won at this facility six times in 13 final-round appearances, including his Winternationals victories in 1999 and 2000. Additionally, Coughlin was runner-up in Super Stock at the 1995 Winternationals.

"Nick Ferri, Jake Hairston, Lump (Brian Self) and the rest of the guys at the Elite shop have been working around the clock to get us up to speed for Pomona," Coughlin said. "We've burned a fair amount of 'midnight oil' to get ourselves fully prepared for the race and the season ahead.

"It's a super exciting time with our new partnership with Mopar and the sport turning a new chapter with FOX that will really push us all upward. I'm ready to get started."