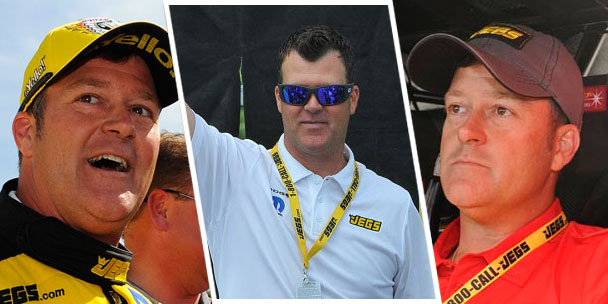 Coughlin, one of the top drag racers in the history of the sport, will team with 2014-15 Pro Stock champion Erica Enders in RJ Racecars-built Darts prepared by the Richard Freeman-owned team. In addition, 2015 Road to the Future winner Drew Skillman and Vincent Nobile will drive Chevrolet Camaros for Elite next season.

"To look at the lineup that Richard has put together at Elite Motorsports with chassis builders, crew chiefs, engine development guys and crew members, it's a job well done," Coughlin said. "I really enjoyed my time with them when I got behind the wheel of their car in Sonoma, Seattle and Indy. As we've put this program together with Erica and I being teammates under the Mopar banner, it's extremely exciting.

"It doesn't stop there. When we look at the depth of the team with Drew Skillman and Vincent Nobile, and then look across at crew chiefs Rick and Rickie Jones, Mark Ingersoll and Brian Self, it's just the start of a lot of great things to come."

Coughlin, fourth in Pro Stock history with 58 victories, is also reunited with Dodge, with which he won the 2014 Pro Stock championship.

"To align ourselves with a new team with Mopar, Magneti Marelli and JEGS is really exciting," Coughlin said. "It will be great driving a Dodge again, especially with Elite Performance horsepower under the hood."

Enders won 15 races in two title-winning seasons with Elite, and Skillman also won once last season. Nobile joined the team mid-season to add another talented driver, and with Coughlin, Elite Motorsports should continue to be a powerhouse in the sport.

"To put Jeg beside Erica and have them as teammates, both of those Dodges will be in contention for a championship," Freeman said. "We feel like we can do that fairly quickly. Jeg and I have been friends a long time and have talked about doing this, but the timing was never right. It all came together, and we're super excited to have him part of our program.

"We feel like we've made this program one of the most coveted in all of motorsports. Mopar joining up with us gives the team another opportunity to prove this a huge deal for us and for NHRA."