Jeg Coughlin Jr. rockets to No. 2 spot in St. Louis on a speedy Saturday afternoon 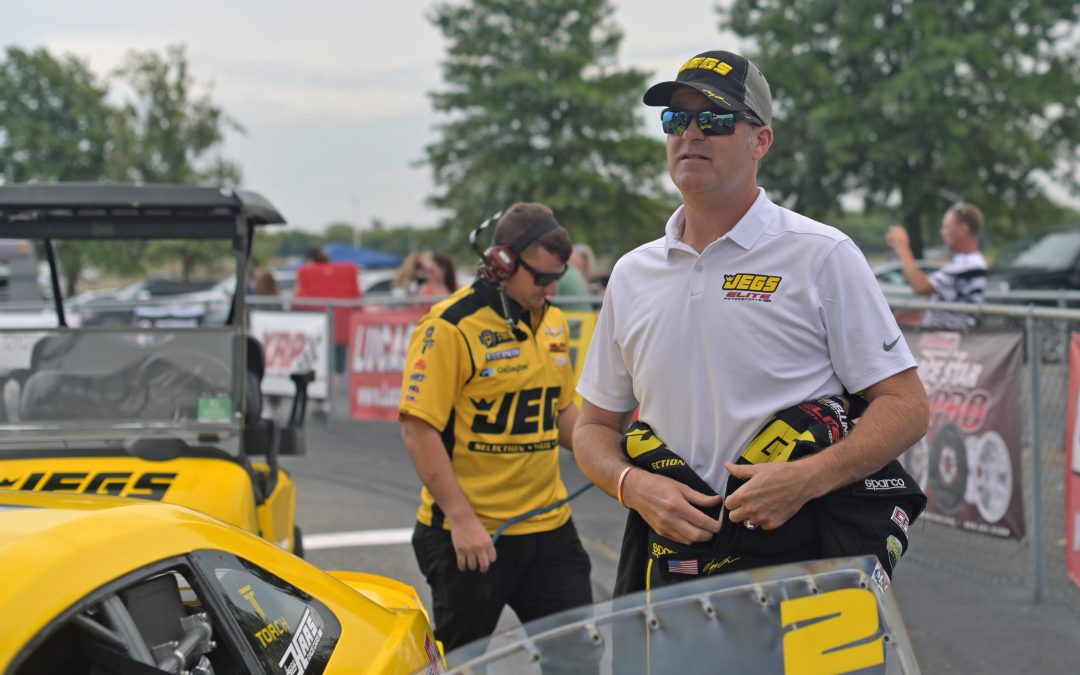 "It was supposed to be in the 90s with bright sun on the track today but we ended up having not much sun at all and some good cloud cover so most everyone was able to step it up," Coughlin Jr. said. "The track stayed really tight all day, which kind of nullified what we did yesterday, but fortunately for us we jumped up to second place and then we were second-quickest again in Q4 so we're very pleased"

Coughlin was fourth overall after Friday's evening session, which is normally the best of time trials. But a stout 6.558 at 208.01 mph in Q3 placed his JEGS.com Elite Motorsports Chevrolet Camaro just behind his teammate Erica Enders' 6.552 at 209.85 mph and a few ticks ahead of current points leader Jason Line's 6.560 at 209.52 mph.

"First session Friday we were off just a little bit but Rickie (Jones, crew chief) and the yellow and black JEGS crew got after it and we moved up to fourth with a great night run," Coughlin Jr. said. "In most cases, that's the best time to show off but we got this agreeable shift in the weather today and we were able to give these great fans a show.

"Anytime all the team cars are running well, and when one of us is No. 1, like Erica is here, then we know we have a bunch of data to share, which makes us all stronger. We have a very talented bank of crew chiefs at Elite and Rickie, who heads up my car, has been making great calls. I like our chances to win another one here in St. Louis."

When Pro Stock eliminations begin around noon local time, Coughlin will be facing Val Smeland, who topped out at 6.633 at 207.30 mph.

"We came into this race off a strong semifinal finish in Reading (Pa.) that could have been even better than it was," Coughlin Jr. said. "The guys just freshened everything up so we could just continue on the progression we were making there. We're enjoying the momentum we've built.

"Tomorrow is supposed to be just like what they called for today, which was hot and sunny, but it could turn out like it did today and stay a touch cooler. I hope it's cloudy so we can thrill the fans a little more, but if it's sunny then it will be very interesting to see how the crew chiefs are tested."