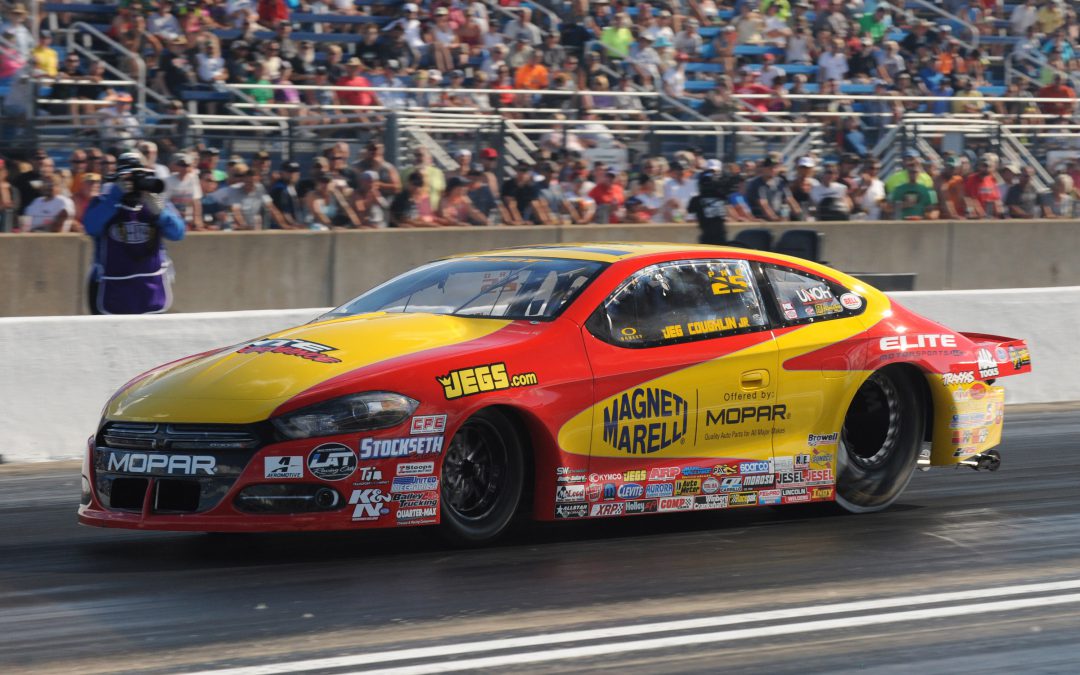 CHICAGO (July 10) – Jeg Coughlin's faith in his Elite Motorsports team has never wavered. Now, with an increase in performance with his Magneti Marelli offered by Mopar/JEGS.com Dodge Dart, that devotion has intensified.

Coughlin outran his higher-qualified opponent in the first round of the K&N Route 66 NHRA Nationals on Sunday at Route 66 Raceway, and then took the Pro Stock points leader to the wire in the second round.

The Elite team continues to develop its new Dodge Dart and its fuel-injected engines. Elite Motorsports won the last two Pro Stock championships with driver Erica Enders, but rules changes for 2016 stopped whatever advantage the team had.

Coughlin and his team have clawed their way to ninth in the points standings, with the top 10 making the Countdown to the Championship that starts in September and determines the Pro Stock champion.
"We've got some strong races coming up with the Western Swing, Brainerd and Indy, and we really need to be on our best behavior," Coughlin said. "It's going to be a tough fight to stay in the top 10 and keep our dreams alive for running for the Mello Yello Pro Stock championship. That's our ultimate goal."

Coughlin won another round of competition Sunday, beating No. 6 qualifier Drew Skillman in the first round. Coughlin (the No. 11 qualifier) was off the line first with a .021-second reaction time, and he carried that all the way to the finish with a pass of 6.641 seconds at 208.23 mph. Skillman's run was a tick slower, 6.644 seconds at 208.52 mph.

"We put a backup motor in today," Coughlin said. "Everything we had coming in to the event was fresh. The guys at Elite Performance worked for two straight weeks on performance, and we definitely made a little ground.

"We've got another week-and-a-half before Denver. Denver's a tough race for a lot of reasons, but hopefully we'll get an opportunity to run one of our cars down the track in Denver before we get there. We've still got work to do on the performance side of things.

"We'll turn our attention back to the shop, and get ready for Denver."

Jeg wasn't the only Coughlin family member racing in Chicago. Brother Mike lost in the first round of Top Dragster, while nephew Troy Jr. was among the final five drivers in Super Comp and among the final nine in Super Gas.

Troy Jr. and his JEGS.com dragster lost in the fifth round of Super to Holden Laris, whose .029-second package topped Troy Jr.'s .058.

Troy Jr.'s JEGS.com roadster fell in the third round of Super Gas when he went .001 red against Joe Fisher.