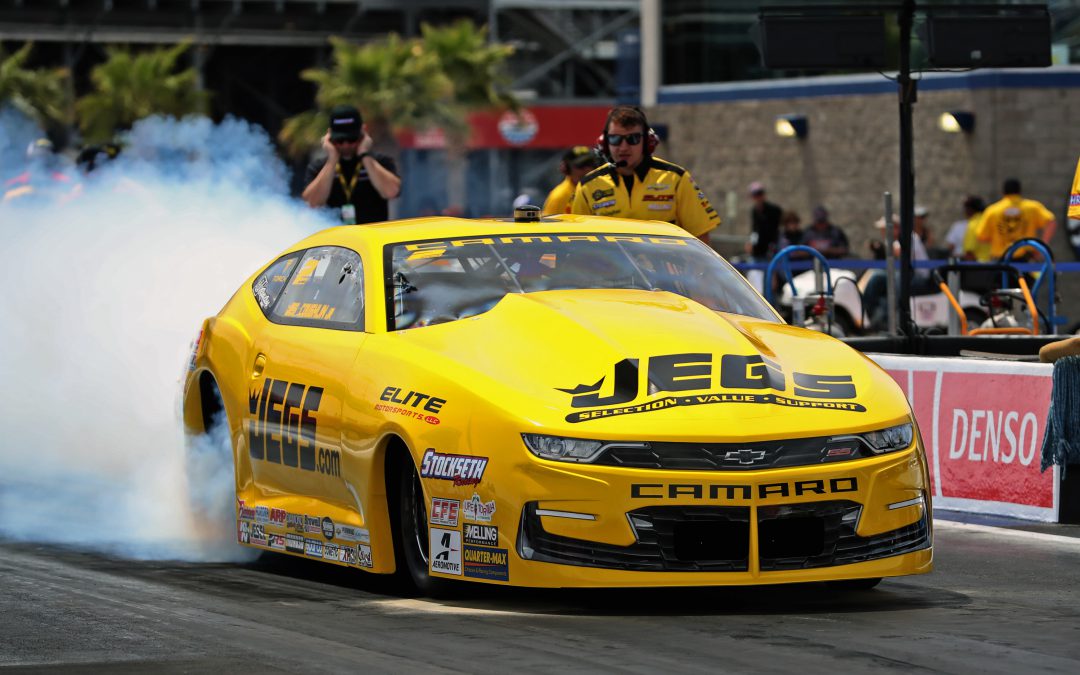 LAS VEGAS (April 6) — In just his second race behind the wheel of a brand-new 2019 Rick Jones Race Cars Chevrolet Camaro, five-time Pro Stock champion Jeg Coughlin Jr. and his JEGS.com Elite Motorsports crew already have a great handle on their ride, as witnessed be a stellar qualifying effort at this weekend's 20th annual Denso Spark Plugs Four-Wide Nationals at The Strip at Las Vegas Motor Speedway.

Coughlin led the class in Round 1 Friday afternoon with a 6.665 at 206.40 mph and later improved to a 6.652 at 205.38 mph to top the final session at the close of Saturday's action. Ultimately, he ended up second on the race day grid, his best starting spot of the young season.

"We really made four pretty good runs," Coughlin said. "First thing out of the gate yesterday we were the quickest car, which was obviously great. That is always our plan. Last night we just kind of underestimated some of the changes we made and didn't have quite as bitchin' of a run as Q1 so we got bumped back to No. 2.

"This morning we came out and made another really good run (6.659 at 206.86 mph) and I think it was one of the top couple of passes that session. And then there in the last session we were the quickest car of all but stayed No. 2 because there just wasn't quite as much track under us. All-in-all, it's been a very good outing."

The switch to a new car was a bit of a surprise to those outside the Elite camp as it came directly after Coughlin's victory in Phoenix. But the team, which enjoys the tuning talents of car builder Rick Jones and his son Rickie Jones when they're not making hot rods back home, was supremely confident in the new design.

"We had a chance to do some testing and then we saw what happened with my teammate Erica Enders' new car, which is just like mine, in Pomona and Phoenix. Because of that we already had some experience and pretty much knew what to expect with it before mine was even finished. That certainly shortened our learning curve quite a bit.

"Obviously, Rickie is very comfortable with the car and is listening to it and fine-tuning it and we will go into race day tomorrow with some good confidence. I am ready to do what I love to do."