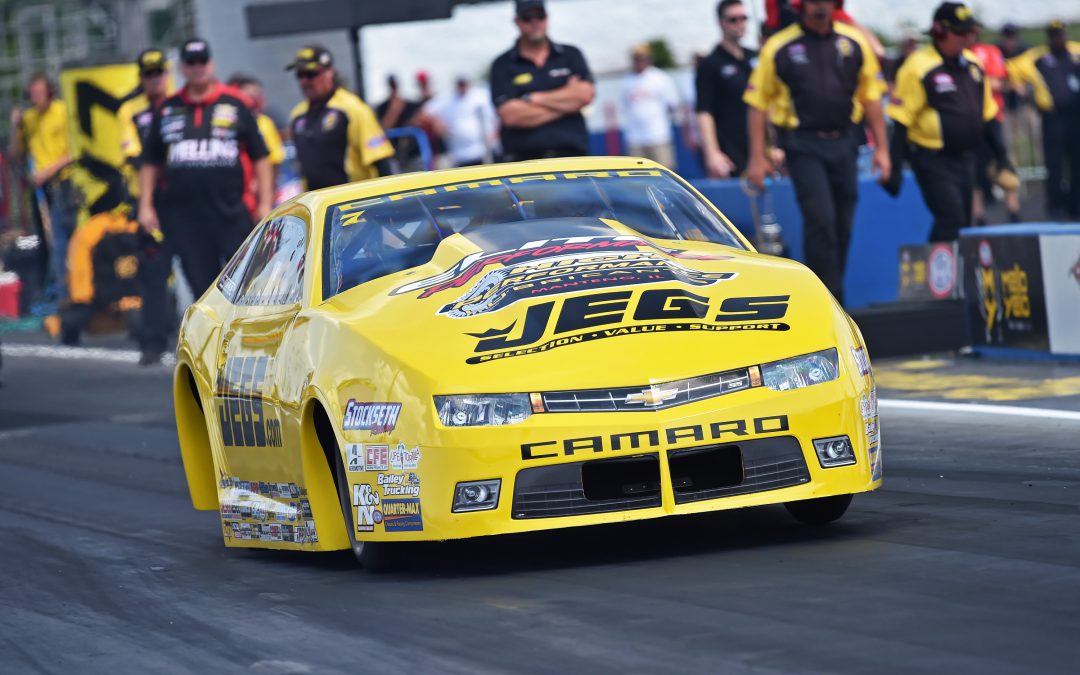 Jeg Jr. will be vying for a third straight victory at Bristol Dragwayas he arrives in town fresh off a Pro Stock win two weeks ago in Chicago and a Super Comp victory last weekend in Richmond, Va. This race he'll have another chance to earn a trophy in his JEGS.com/Elite Performance Chevrolet Camaro.

"I would love to visit the winner’s circle for the third week in a row at Bristol," Jeg Jr. said. "I feel great behind the wheel and the Pro Stock car has been very good. We were quickest of every round in Chicago and quickest of the first round in Virginia but lost a very close race to Chris McGaha in E2.

"We're licking our wounds a little bit after that one but there’s a lot of summer left, a lot of racing left and we just really want to work our way into the top 10 and see if we can’t seed ourselves in this championship hunt come September. Just being a part of the top 10 is a dog fight in itself, honestly, so stay tuned."

Having success on Father's Day would make a third successive win extra special.

"Jeg III is 21 years of age and Carly is 3 and a half so life will be great on Father’s Day, regardless of how we do on the track," Jeg Jr. said. "We'll also have my pop, Jeg Sr., on hand and I will certainly enjoy spending Father’s Day with him. Naturally, another win would be tremendous, no matter which one of the JEGS cars ends up in the winner's circle."

Troy Coughlin, the three-time and reigning Pro Mod champion and brother to Jeg Jr., emerged from a brief retirement last weekend to return to the E3 Spark Plugs Pro Mod Drag Racing Series. Although his debut didn't go as planned, he's confident his turbo-charged JEGS.com Ford Mustang will be a contender this weekend.

"The competition has definitely stepped up its game and once again we have huge participation in the class with a bunch of very tough racers," Troy said. "It's very cool to see how far the class has come since we came to NHRA full time.

"We had some growing pains last weekend with a new car but I have complete faith in crew chief Steve Petty and the rest of the guys. We have raced together for a long time, won a bunch of races and three titles so we know what we have to do.

"I'm thrilled to be racing with Paige and T.J. and my brother Jeg. Plus, (daughter) Meghan and my grandson Brodix will be joining us for Father's Day weekend along with my dad so we definitely plan on having some family fun."

Multi-time national event winner Troy Jr. will have two chances to win this weekend as he vies for glory in both Super Gas and Super Comp. Troy Jr. usually races in Top Alcohol Dragster but whenever the schedule allows, he jumps at the chance to drive his other cars.

"I'd race every weekend if I could," Troy Jr. said. "Having all these events in a row is perfect for me. Not only does it keep you sharp as far as driving goes, but it's a great chance to race together with my family.

"I can't make any predictions because when you're going up against the best racers in the country pretty much every round, it's impossible to predict any success, but we're certainly going to give it our best effort."

Little sister Paige, a 17-year-old recent high school graduate, is the final Coughlin competing this weekend, as she continues her progression in a JEGS Super Comp dragster.

"I'm learning so much this year," Paige said. "When you race Super Comp, most of the time you're going up against drivers that have been doing this for years. I'm doing everything I can to pick up on everything that's happening, trying to notice all the little things that make the difference between winning and losing.

"My guys, Justin Beaver and Tony Collier, have been so helpful in not only prepping my car but in being there for me and helping me progress as a driver. My dad and brother are also a big part of this and I'm happy to be racing with them, Uncle Jeg and my granddad on Father's Day weekend."