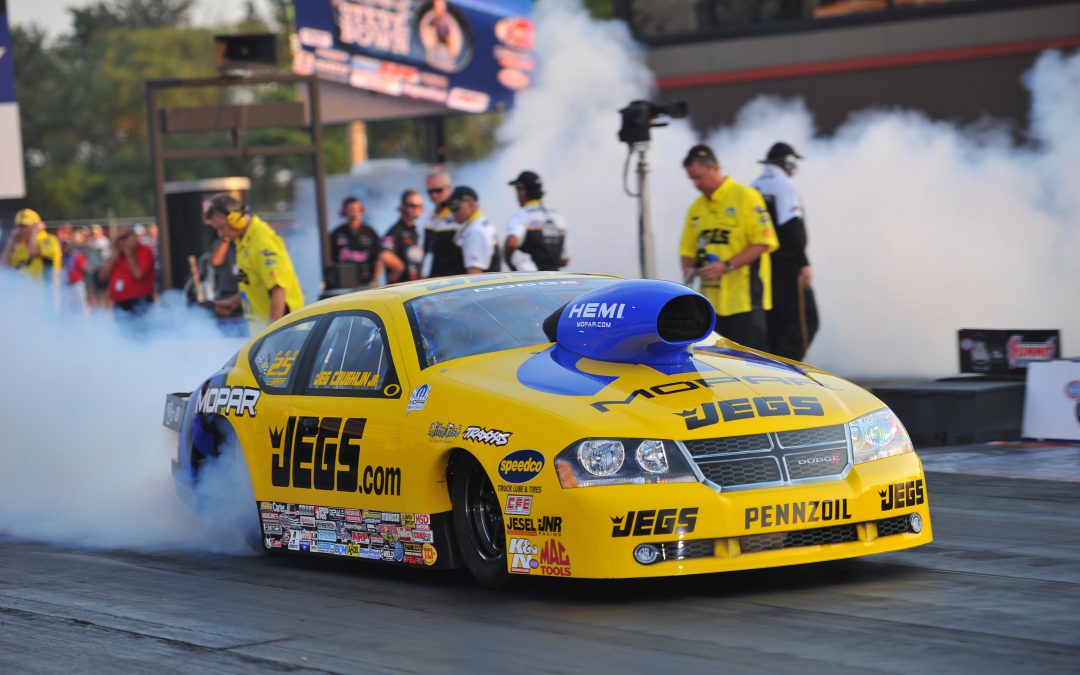 DENVER (July 21) – Jeg Coughlin Jr. goes into Sunday’s racing at the 33rd annual Mopar Mile-High NHRA Nationals with a chance to win not one, but two trophies before the afternoon is over.

Coughlin put his JEGS.com/Mopar Dodge Avenger into the No. 8 spot in Pro Stock and already has raced his JEGS.com Dodge Challenger Drag Pak to the quarterfinals of Stock Eliminator at Bandimere Speedway.

"Both cars are running really well," Coughlin said. "Ninety percent of the time, racing two cars on Sunday keeps me calmer because the disciplines are so different. It makes me pay attention a little more than normal.

"It’s one of the things I enjoy about this sport is the discipline it takes to run multiple classes in the same weekend."

In Pro Stock, Coughlin’s Avenger had a best pass of 7.010 seconds at 196.73 mph. He said the car responded well to some changes the team made during each day of qualifying.

"We made a lot of test runs here last week, and we left scratching our heads a little. We came in here for the race and had to make a decision. We decided to reinvent the wheel a little and the guys did a great job of getting the car happy and drivable."

Coughlin’s first-round opponent is No. 9 qualifier Greg Anderson, who had a best pass of 7.011 seconds at 196.44 mph. Coughlin said conventional racing logic of the higher qualified car having an advantage goes out the window on the mountain, because the high altitude saps so much horsepower from the engines.

"In that final run we were much more efficient through the gears," Coughlin said. "That’s what it takes to improve our ETs here, because with this thin air you can’t rely on making up time with muscle and horsepower on the back half.

"I like the improvements we’ve made. This is one of our few top half qualifying efforts this season. We’ll be first pair against a great competitor and we hope to start the day off right with a win."

In Stock, Coughlin has reached the quarterfinals, where he will get a bye run into the semifinals.

"We’ve been knocking on the door with that car," Coughlin said. "I would enjoy nothing more than to end the day with a big win in either car."

Pro eliminations at Bandimere Raceway get under way at 11 a.m. MDT on Sunday. All action will be shown on ESPN2.