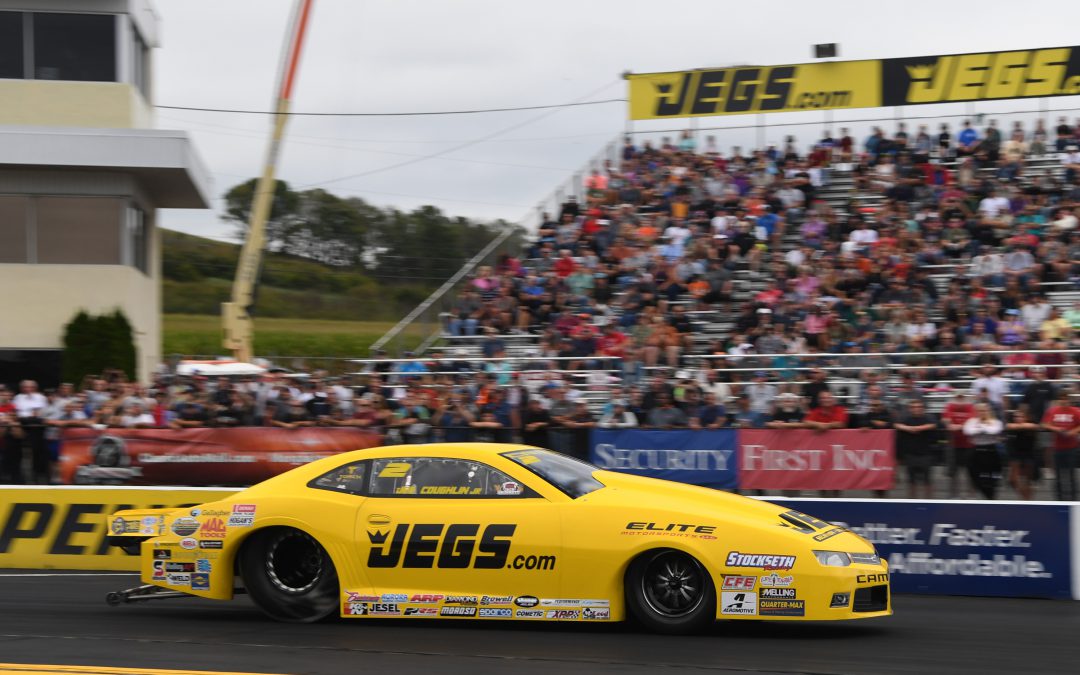 READING, Pa. (Sept. 14) — The NHRA playoffs have begun with the 35th annual Mopar Express Lane NHRA Nationals and five-time Pro Stock champion Jeg Coughlin Jr. is looking sharp enough to challenge for what would be a sixth career victory at historic Maple Grove Raceway. At the conclusion of the quickest qualifying session of the year, Coughlin's JEGS.com Elite Motorsports Chevrolet Camaro is fifth overall in the field.

At a time of the season when every point counts, Coughlin's four impressive qualifying runs helped him close in on overall class points leader Bo Butner by four points due to better overall elapsed times in each session.

"The track has been absolutely amazing all weekend, despite the misty weather, and we've run very well," Coughlin said. "We were third quickest in Q1, ran our best elapsed time of the year in Q2, we were third quickest again earlier today even though it was slightly warmer, and we closed out qualifying with the quickest run of the session.

"The whole program is clicking. The guys are on point and I continue to feel great behind the wheel. There's a long way to go with six playoff races on the schedule but the start to Race 1 has been about as good as we could have asked for."

In a cool Friday night session when many drivers posted their quickest runs of the year, Coughlin and crew managed to go a tick under the 6.5-second mark with a stout 6.499 at 212.03 mph. That sets up a first-round date with veteran Bob Benza, who posted a best of 6.584 at 200.77 mph.

"We started the weekend with some great cloud cover, cool temperatures and a little mist and everyone ran great," Coughlin said. "It stayed misty and cloudy today but warmed up a bit so we all slowed down just a touch. Relative to the field we stayed strong, and even led the last round, so all that's very encouraging. It's supposed to be a bit warmer still tomorrow so we'll need to stay on our toes, but I know we'll be ready to race."

Defending event champion Troy Coughlin Jr. looks every bit as strong as he did last year in Reading, capturing the No. 6 qualifying position with a 5.209 at 280.37 mph in his JEGS.com McPhillips Racing Top Alcohol Dragster.

Once eliminations began Saturday evening, Troy Jr. took care of No. 11 qualifier Jeff Veale with a 5.249 at 279.32 mph to Veale's 5.338 at 278.63 mph. Troy Jr.'s elapsed time was the second best of the opening round. By fate, he's slotted opposite Shawn Cowie in the quarterfinals, the only driver quicker than Troy Jr. in Round 1.

"Rich (McPhillips, car owner and crew chief) and the rest of the Mc-P boys are emotional about this race because they all live right up the road in Phoenixville, Pa., and they consider this their home track," Troy Jr. said. "We have friends and family to impress and after last year's win we really want to pull off the repeat.

"We had a good run tonight and got by Jeff and now we have Shawn in Round 2 and he also ran a great number so we'll need to have our finest hour against him tomorrow," Troy Jr. said. "The crew is taking the engine down to bare bones tonight and putting in some fresh parts so we can put our best foot forward against Shawn. We'll definitely be ready to put on a show for these fans. They've been awesome."