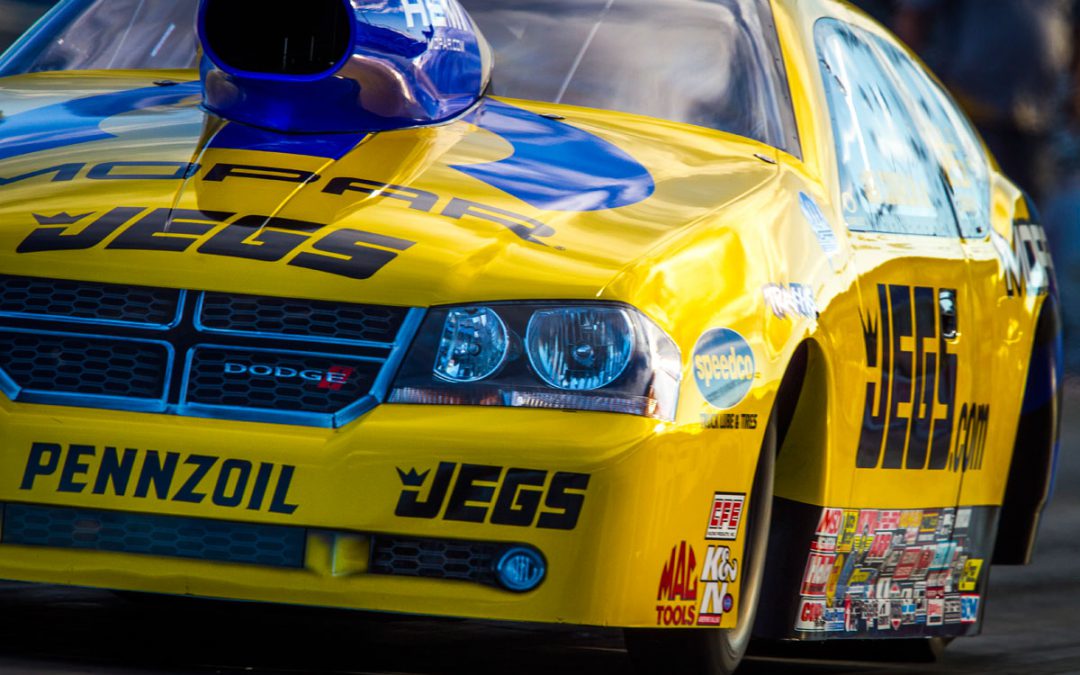 ST. LOUIS (Sept. 29) – Jeg Coughlin Jr. and the JEGS.com/Mopar Dodge Avenger held the Pro Stock championship lead for one round Sunday, but a quarterfinal-round loss at the AAA Insurance NHRA Midwest Nationals helped knock him back to second place with three races left to go in the season.

"It's a great effort," Coughlin said. "We're halfway through this Countdown, and we're not going to leave here too far out of the points lead, so we'll refocus.

"I know the guys are going to work on things, and we're going to have to continue to dig deeper and find that comfortable spot as drivers, too."

Coughlin got the points lead when he opened the day with a win over Greg Stanfield while then-points leader Jason Line lost in the first round to Mike Edwards. But then Greg Anderson beat Coughlin in the second round, which opened the door for Edwards, who made it to the final, to take the lead from Coughlin.

In the first round, Coughlin turned in a solid lap as Stanfield pushed the tree too hard and went red by -.007 seconds. Coughlin had a .059 second reaction time and cruised down for a pass of 6.541 seconds at 211.39 mph.

"We made a decent run first round today," Coughlin said. "The car pulled left a little bit, and I had to kind of drive it back. But we were able to turn the win light on when Greg turned it red.

"It's exciting that we earned a little bit of luck out of this group. But that didn't stretch us too far as we talk about the second round."

Anderson got lane choice over Coughlin in the second round and was off the line first with a .005-second reaction time to Coughlin's .039. Anderson needed that starting line advantage to win on a holeshot, as his 6.571 at 210.47 mph was slower than Coughlin's lap of 6.539 at 210.57 mph. The edge at the start was enough to give Anderson a win by less than a foot at the finish line.

"Obviously, Greg Anderson, a many-time champ, did a nice job there," Coughlin said. "I felt like I could be mid-teen to mid-20 at worst at the tree, and I felt like I caught it pretty nice letting the clutch out. But it says otherwise. I was .039 and he was .005 and we came up two thousandths of a second short."

Coughlin said there isn't much time or desire to sulk about the team's early exit this weekend as the tour quickly turns to Maple Grove Raceway in Reading, Pa., for next weekend's tilt.

"We'll take this St. Louis experience and move on," Coughlin said. "That's all we can do. We had a great race car here, other than Q4 when we were working on another program. We made some great runs.

"I can tell you one thing that's comfortable about the upcoming race, and that's Maple Grove Raceway. It's always been a really fun track for me. If that doesn't fire me up, nothing will."