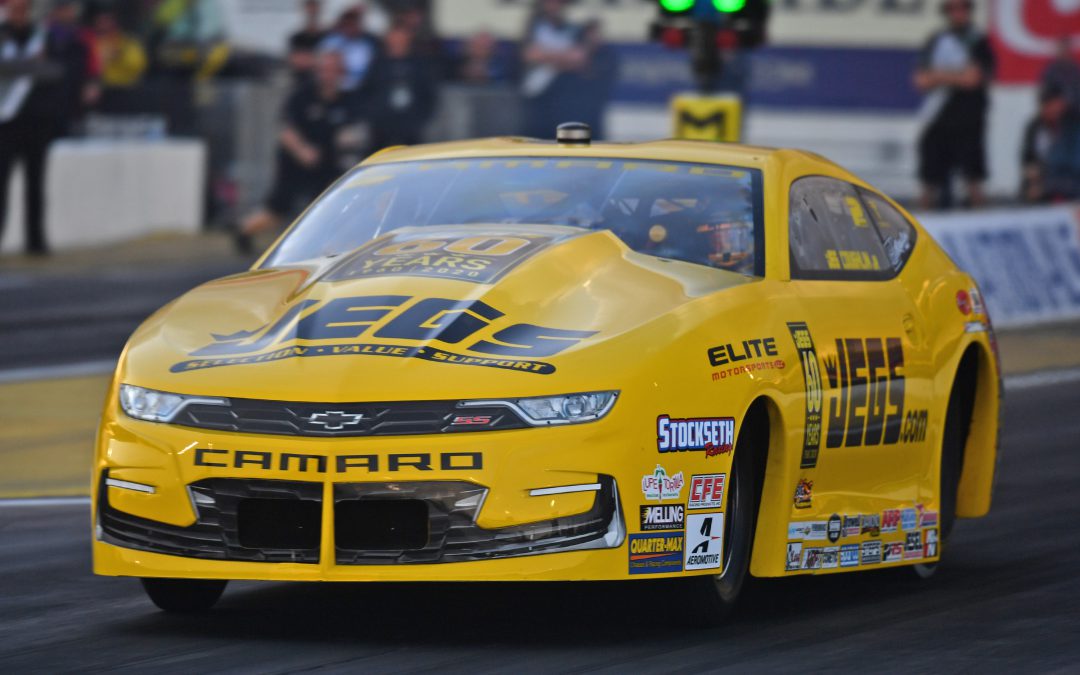 CHANDLER, Ariz. (Feb. 22) — Jeg Coughlin Jr. seems to be operating on another level this year, extending a run of having the quickest Pro Stock car in the NHRA to 11 consecutive rounds. The streak places his JEGS.com Elite Motorsports Chevrolet Camaro on top of the field of the NHRA Arizona Nationals heading into race day.

Coughlin opened the season two weeks ago with a convincing win in Pomona, Calif., where he had the quickest car of every qualifying and elimination. That continued here in Phoenix with three more powerful passes that gobbled up every bonus point available. If not for rain showers canceling one of two schedule rounds Saturday, the tally of class-leading runs would likely be 12.

"It's been quite a run this year and we are certainly going to try to keep this going for as long as humanly possible," Coughlin said. "Everyone is making quite a big deal out of this and they should because everyone on this team has been working extremely hard to get us to this point.

"This is certainly the best run of its type I can remember having in my career. I look around the pits and see the level of talent we're up against every session and to have my car be the quickest, followed by two more Elite cars in second and third place, is really a feather in the caps of everyone under the Elite umbrella."

"Much like Pomona, we felt we had a really good car when we unloaded and went out there for Q1 and had a good first run," Coughlin said. "Rickie (Jones, crew chief) just fine-tuned it from there, which didn't require much work, and we came out and absolutely crushed it in Q2. That 6.536 was pretty much unchallenged from there.

"We're almost two-hundredths ahead of Erica (Enders) on the timing sheet, but she came very close to us in the one session we were able to have today after the rain so that car is coming around very well also."

Pro Stock begins eliminations around noon Sunday with Coughlin starting his quest for a third straight victory against Elite Motorsports teammate Marty Robertson, who anchors the field with a career-best 6.695 at 206.39 mph.

"Marty has been drag racing for a while but just got into Pro Stock this year and is racing with Elite so we know what he has under the hood," Coughlin said. "Once they get that car dialed in, he'll be as fast as the rest of us. He had a valiant effort out there today to sneak into the field so I know he's excited.

"It's supposed to be a touch cooler tomorrow so the fans are in for a treat. Hopefully we can defend our win here last year and keep this great start alive."

This was the 34th low qualifying effort of Coughlin's career.