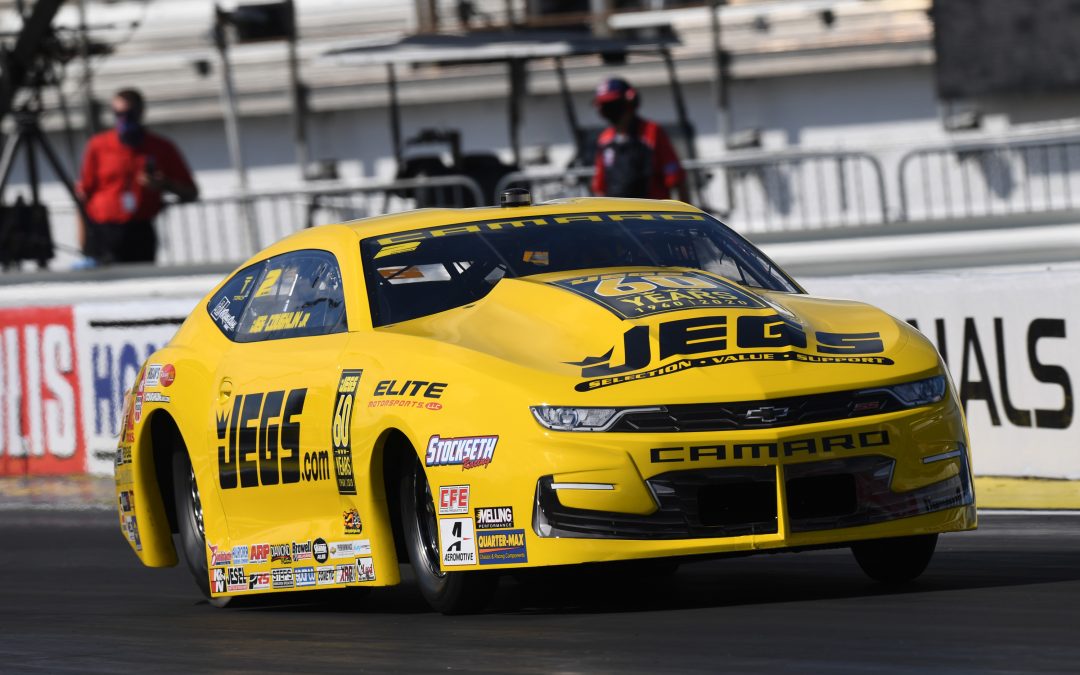 INDIANAPOLIS (July 12) — Jeg Coughlin Jr. came within .016-seconds of collecting his second NHRA win of the season Sunday at the E3 Spark Plugs NHRA Nationals, and his strong runner-up effort in his JEGS.com Elite Motorsports Chevrolet Camaro was enough to put him back into the points lead he held after winning the season-opener in Pomona, Calif., back in February.

Coughlin beat Elite Motorsports teammates Erica Enders and Bruno Massel, along with rival Chris McGaha, on the day before succumbing to Jason Line in an entertaining finale of the first NHRA professional event in four and a half months.

“We had a great day, a great weekend really,” Coughlin said. “Rather than qualify on Friday the NHRA allowed us a chance to test and our car was really strong right from the start. We did get two qualifying sessions Saturday and earned second place, so we were pleased with that. We felt really good here on race day and made a great run.

“It was special to be back racing again and to see some fans in person and put on a show for them. I know we’ve all missed drag racing and it’s a relief to be back at it. I think the NHRA did a great job keeping everyone healthy and safe.”

With minimal experience in Pro Stock, Round 1 opponent Massel had a tough draw against Coughlin and ultimately didn’t have much of a chance on track, with Coughlin winning after a 6.622 at 206.70 mph to Massel’s resigned 7.093 at 155.60 mph.

“That was the lucky race for us because both of our cars weren’t very happy that session,” Coughlin said. “Fortunately, mine came around a tick before hers and we were able to pull away at the other end and take the win.”

“It was a little cooler today and they started eliminations much earlier than normal so that helped everyone,” Coughlin said. “We were top 3-4 every session and had a plan for Jason in the final but came up just short. That was by far the hottest time of the day and the right lane was pretty slippery. I think if we’d had another chance at that lane Rickie (Jones, crew chief) would have figured it out but we’ll never know.”

“We made a decent run but ran into a driver and crew who put together a super strong pass,” Troy Jr. said. “These cars require near perfection every pass and when you don’t start qualifying with a good run then it kind of compounds from there. You need every pass to be good so you can build on it the next time up.

“The brain-trust here at Elite Motorsports is second-to-none. It was great to work with them and everyone made me feel right at home. I wish we could have turned on some win lights but that will have to wait for next time. We’re not sure when that will happen but I’ll be ready to go if the opportunity presents itself again.”

Troy Jr. will compete in Super Comp at next weekend’s JEGS Speedweek Division 3 race at National Trail Raceway near his hometown of Columbus, Ohio.