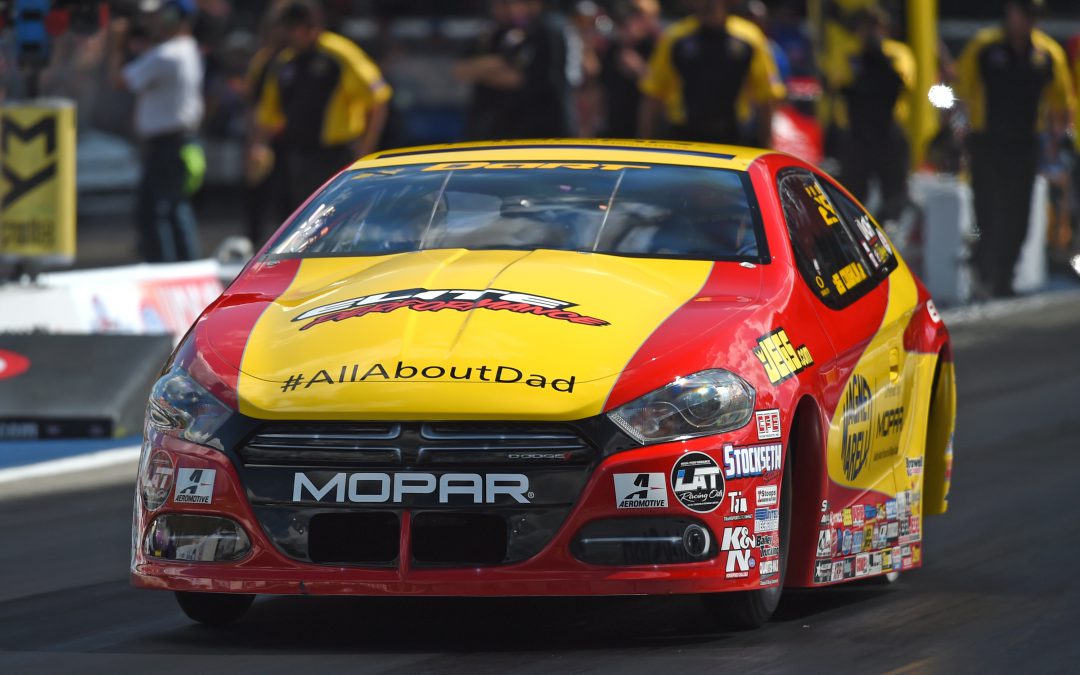 BRISTOL, Tenn. (June 19) – The sight was familiar, yet unfamiliar.

That was the 108th semifinal finish of Coughlin's career, but the first this season with his new Magneti Marelli offered by Mopar/JEGS.com Dodge Dart.

"The ultimate goal is to advance through four rounds and win the race," Coughlin said. "As our fans, friends and family know, it's been an infancy year for us, even when you look at the talent around this team. It's caught us all off-guard, quite frankly, but we are where we're at."

Coughlin's race came to an end against No. 2 qualifier Greg  Anderson.

"Our #AllAboutDad weekend has come to a conclusion on the race track," Coughlin said. "We'll get home and celebrate with our families more tonight and in the coming week. We look forward to Norwalk in a few short days."

Coughlin's yellow-and-red Dodge carried the hashtag #AllAboutDad on the nose in Bristol, in honor of Father's Day and a special campaign between JEGS High Performance and Dockers.

"But I felt confident we had a really good percentage chance of turning on the win light second round. It felt nice to do that."

Then came the semifinal match against Anderson, and Coughlin was again off first with .020 light. But Coughlin Elite Motorsports Dodge started shaking the tires, and he could only watch as Anderson sped to the final round.

"I felt we'd have a real tall order against Greg and Jason (Line) and Bo from a performance standpoint," Coughlin said. "We got just a little jump off the line. As it turned out, we got into some tire shake. I saw Drew Skillman right in front of us get all kinds of crazy and about went across the center line at the 60-foot clock.

"That's when you dig deep and have faith in your car. We rolled out a little farther than he didn't and then it started shaking. It was going nice and straight through the shake, and I was trying to get it in the next gear, the next gear, the next gear because you never know what's happening in the lane over there. I saw Greg motoring by, and that was all she wrote."