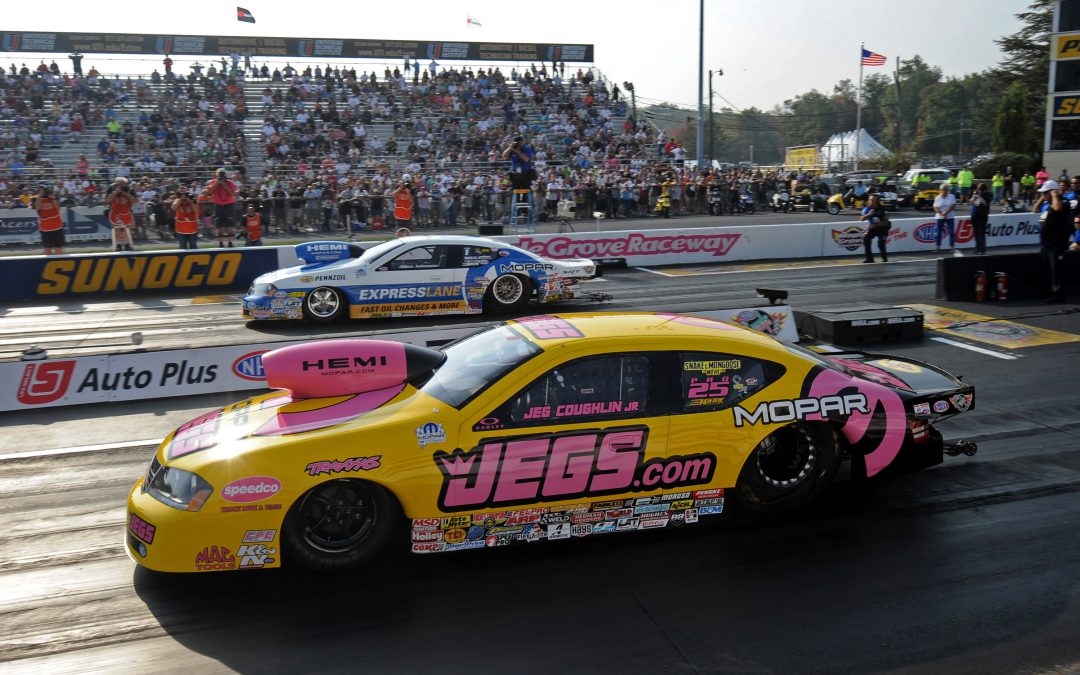 Coughlin, the four-time Pro Stock champion, won on holeshots in the semifinals and final, beating J&J Racing teammate Allen Johnson in the final round with a .004-second reaction time.

"Sometimes you live and die on your starts, there's no question about it," said Coughlin, who secured his 56th career Pro Stock victory. "We just had some off runs the last two weeks and didn't get away with it. I think the thing that fired me up is following my son, Jeg III, play in the Ohio state district golf tournament. He was looking to advance to the state finals. It was an event, kind of like the Countdown (to the Championship), where it's all on the line. A bad hole or two can make it tough.

"As I was keeping his stats for him, I was just getting more and more fired up by watching his drive and dedication. I told him after that, 'Man, this weekend is going to be just fantastic for me because you've got me fired up.'"

Coughlin's "worst" reaction time Sunday was .032 seconds, but he also had lights of .022 and .012. The .012 came against No. 1 qualifier Jason Line in the semifinals after Line had lane choice with a quicker pass in the quarterfinals.

The two holeshot wins give Coughlin 91 for his stellar career, the most in Pro Stock history.

"It doesn't get any better than that," Coughlin said of the semifinals and final. "The KB Racing cars have come on like gangbusters the last four or five weeks. To get by my teammate AJ – he's gotten by me in a couple of finals this year – it felt nice to see that win light turn on. I put the car in fifth gear and peered over to the right. I could hear him but not see him.

"I saw my win light come on and that's when the celebration began. The J&J team did a heckuva job to get both our cars in the finals."

Coughlin had led the Pro Stock standings during the previous two races but didn't hang on to it at the end of each event. This time, though, he assured himself of the points lead by beating Line and then extended it to 45 points, unofficially, by winning the race.

"With the way things have played out the last couple of races with us playing around with the points lead, it feels good to leave Reading with the lead," Coughlin said. "I'm an optimistic person, but we've got a lot of racing left to do. All across the Pro Stock horizon they are (preparing) for a great Vegas run. We'd love to say this thing is all but over, but there are a lot of rounds left."

The Countdown resumes with the NHRA Nationals on Oct. 25-27 at The Strip at Las Vegas Motor Speedway, the penultimate race of 2013.

"I wasn't worried about not leaving the points lead in those other races," Coughlin said. "I was frustrated by the fashion we were eliminated from those events. We made a pretty good jump over No. 2 to have the points lead, but it's all about racing hard, racing smart. Fortunately our team did both those things this weekend."