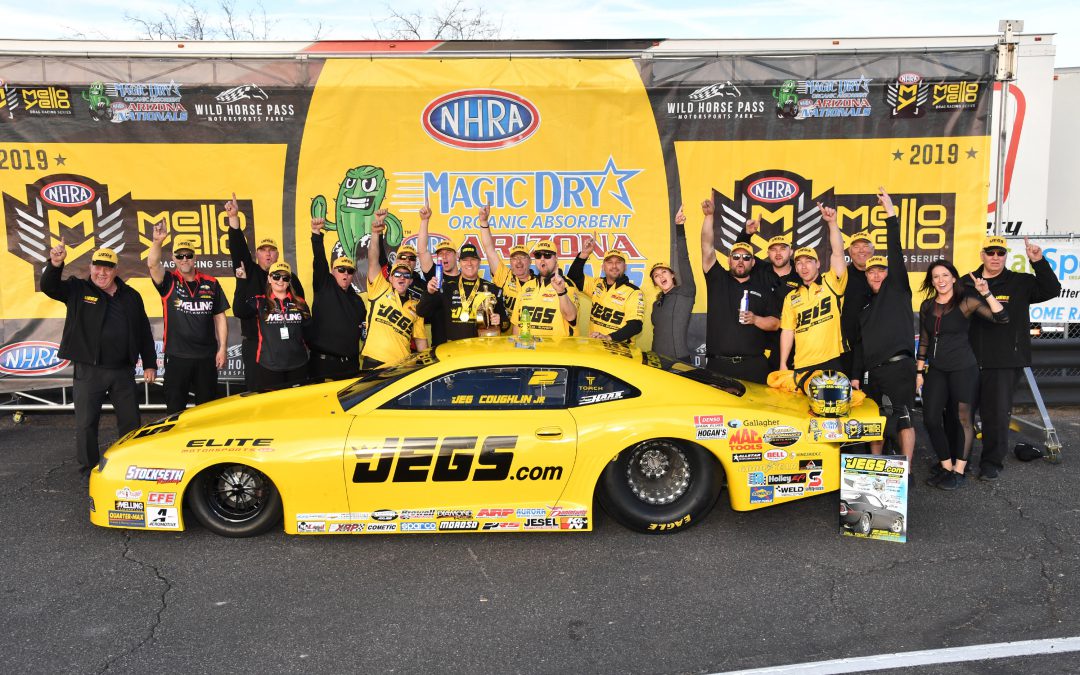 CHANDLER, Ariz. (Feb. 24) — When you've won 62 times in Pro Stock competition, it would be understandable if the victories started to blend together in your mind. But for five-time series champion Jeg Coughlin Jr., earning the trophy of Sunday's 35th annual Magic Dry Organic Absorbent NHRA Arizona Nationals in his 1,000 round of Pro Stock racing, this trophy has special significance.

"This win today truly feels really second-to-none," Coughlin said. "To reach a mark like this — 1,000 rounds of racing in this class — and to hit it just right with a win, wow, that's just incredible.

"It's a lot of racing. I've been racing Pro Stock for more than 20 years and to reach this mile marker is amazing. I've got to thank my family and all the crew members and teams I've had behind me through the years. I've had some amazing talent helping me get here, from mechanics and engineers working on the car, to the various crew chiefs and engine builders, the list goes on and on.

"This is really a testament to this Elite team and all the other teams we've had over the years. I remind myself every time I get in the car to just get in there and do what I love to do and that's race this car. That's a cliché saying from the Days of Thunder movie, as someone pointed out to me years ago, but it's still a damn good point. I'm honored to be here, doing what I love."

It wasn't a dominant win, by any means, and as he has so many times in the past, Coughlin needed to be extra sharp behind the wheel of his JEGS.com Elite Performance Chevrolet Camaro to get this victory. But he ticked all the boxes by the end of the day, beating Greg Anderson, Alex Laughlin, Erica Enders and Matt Hartford to secure his 81st NHRA national event victory. (Coughlin has 19 Sportsman wins.)

"This wasn't our best effort today, quite frankly, but I'm certainly not complaining," he said. "I don't want that to come off wrong but we got away with it a few times today. We will chalk this up as an attention-getter and see if we can't fix everything and be on our best behavior for the next race and beyond."

Coughlin started the day opposite Anderson, who he was racing for the 100th time. To say he was up for the contest would be an understatement as Coughlin posted a near-perfect .001-second reaction time and a 6.568 at 210.90 mph to advance over a surrendering Anderson, who drifted to a 20.633 at 48.17 mph after getting out of shape early.

The next round ended up being a free pass after Elite Motorsports teammate Laughlin rolled the starting line beams and was disqualified. Still, Coughlin powered to a 6.562 at 210.41 mph.

That left yet another Elite driver, Hartford, who left the starting line -.024 early and was disqualified, turning Coughlin's final-round 6.557 at 210.67 mph into a victory lap.

"Timing was really in our favor today," Coughlin said. "Greg had trouble first round. Alex had trouble second round. Erica made a run but then Matt red-lighted. Still, we were fast in all four rounds and we certainly couldn't be taken lightly but nevertheless, this feels great.

"We get to celebrate our fearless leader (team owner) Richard Freeman's birthday. He's the 'Big 46' this weekend. I'm really proud of what he's put together and I'm proud to be a part of it and I have been since I arrived here. I've said that on dozens of occasions, even during some of the lull times we've shared. Right now, I now it feels great to win here again in Phoenix and this early in the season."

With the win, Coughlin jumped to fifth place in the points.