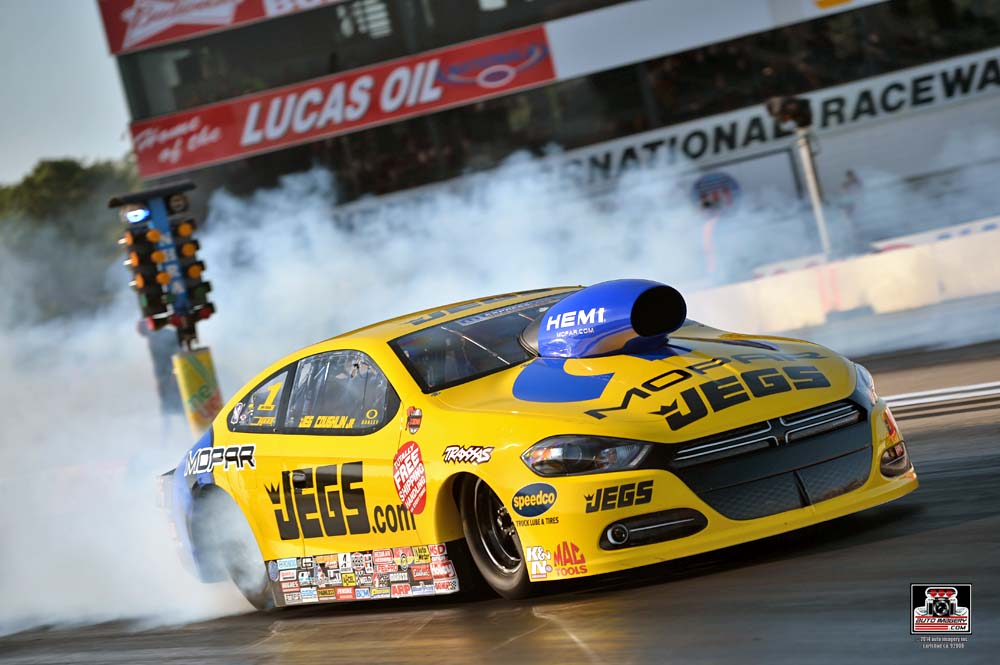 BRAINERD, Minn. (Aug. 17) — JEGS.com/Mopar Dodge driver Jeg Coughlin Jr. will have to wait two weeks for his chance at a fifth Lucas Oil NHRA Nationals victory, and he'll have to do it at another racetrack.

The semifinals and final in Brainerd were postponed by rain Sunday, and NHRA will run those two rounds during the Chevrolet Performance U.S. Nationals on Aug. 31 at Lucas Oil Raceway at Indianapolis.

That marks another milestone in Coughlin's storied career, as he has never completed a race at a different venue.

"This will be a first in my career, I believe," Coughlin said. "It happened maybe one other time, but I wasn't in the event. I was a victim to the track before they called it.

"It will be interesting. I love Indy and I can't wait to get there and perform in the 60th anniversary of that race."

Coughlin will line up against Vincent Nobile in the fourth qualifying session at Indy, which will serve as the Brainerd semi. Coughlin will have lane choice after a 6.612-second pass at 207.88 mph took out Deric Kramer in the second round.

Coughlin also plans a few more passes before Indy, as his team will test in St. Louis next week.

"We'll be on our best behavior by the time we get to Indy," Coughlin said. "We'll be ready to race not only the U.S. Nationals but complete this one."

Coughlin, the No. 5 qualifier, started eliminations in Brainerd with a first-round win over fellow Ohioan Larry Morgan. Coughlin's pass of 6.602 seconds at 208.42 mph overpowered Morgan's run of 6.674 seconds at 206.32 mph.

"We made it through the first two rounds before they ended up postponing our event to finish on Sunday at Indy," Coughlin said. "I felt pretty good about our car today. We improved a little bit from Saturday's runs, and I felt like if we had run it tonight we would've had a good chance to challenge for a race win, but we'll never know and we'll move to Indy."