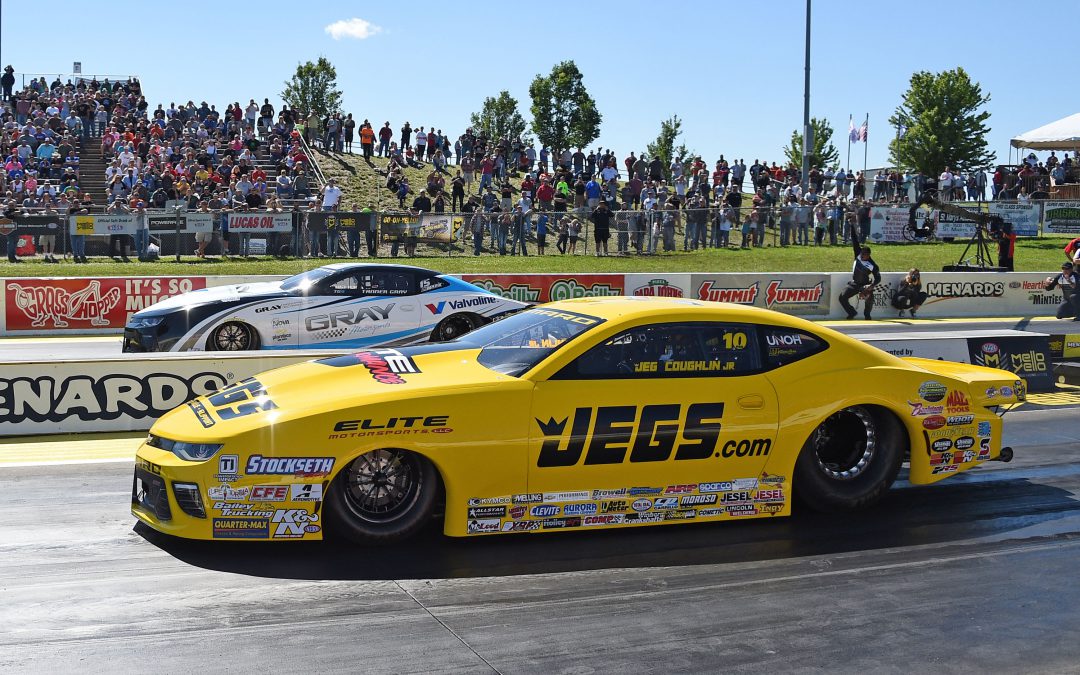 TOPEKA, Kan. (May 21) — Six-time drag racing champion Jeg Coughlin Jr. reached another incredible milestone Sunday by winning his 600th elimination round en route to his second runner-up finish of the 2017 season. Coughlin joins Warren Johnson and Greg Anderson as the only drivers in Pro Stock with at least 600 elimination wins.

"It's really cool to chalk up 600 round wins," Coughlin said. "It's not something you really keep track of. We've been at this Pro Stock a couple decades now and I'm honored to be sitting here having accomplished something very few have ever done.

"I was reflecting on those 600 round wins on the ride home tonight and the thing I kept coming back to was all the talented people I've worked with along the way. Starting with my Dad, Jeg Sr., to guys like Dick Maskin, Bob Glidden, Roy Simmons, Gary Pearman, Roy Johnson, Mark Ingersoll, Nick Ferri, Jake Hairston, Rick and Rickie Jones, Brian Self, so many others…it's the people that made it happen."

Already one of the top 10 drivers in NHRA history, Coughlin also added another final round appearance to his resume during the 29th annual Menards NHRA Heartland Nationals presented by Minties. He beat Deric Kramer, Allen Johnson and red-hot Bo Butner on the day before red-lighting away his chances at another trophy in the final.

Coughlin now has 44 runner up finishes to go with 58 victories in the Pro Stock class, where he has claimed five championships. His other world title came in Super Gas in 1992. He has 18 Sportsman wins in 24 final-round showings.

The historic 600th round win was especially memorable as Coughlin squared off against Butner with a place in the finals on the line. Butner, who won two of the last three races and was top qualifier for the second event in a row, had a great .010-second reaction time but Coughlin was even better with a near-perfect .001-second launch. That tiny margin was enough to hold off Butner, whose 6.569 at 210.18 mph wound up being nine inches behind Coughlin's 6.576 at 210.60 mph.

"We were trying to make some real noise," Coughlin said. "We counted on this race being real close with the way we have both been running. All we needed to do was see how it played out. I knew I wanted to be sharp at the Tree. I'd had a .017-second light the run before and I felt like I wanted to be about .010. I ended up being .001, which was a result of being a tick over-staged, probably by a quarter-inch or so.

"It was a great race and we were trading paint, so to speak, all the way down the track. I won by .002 seconds, a pretty dramatic way to take our 600th round. Bo's been a driver we all knew was going to explode and he has this year. That was a big win for us."

"That was a good run by Tanner so we might not have had a chance any way but you sure hate it for the team when you give one away like that," Coughlin said. "I went full throttle and the clutch pedal kind of jumped up against my foot, which happens. It moved my foot ever so slightly, maybe a hundredth of an inch, but that was enough for the second switch on clutch pedal to engage, telling the car it was time to go. The motor free-revved and it just snapped my foot up and the car took off.

"All in all, a good day. Only one team happier than us so we'll take it and start prepping for New Hampshire."

After a weekend off, the NHRA tour resumes action June 2-4 with the fifth annual NHRA New England Nationals in Epping. N.H.