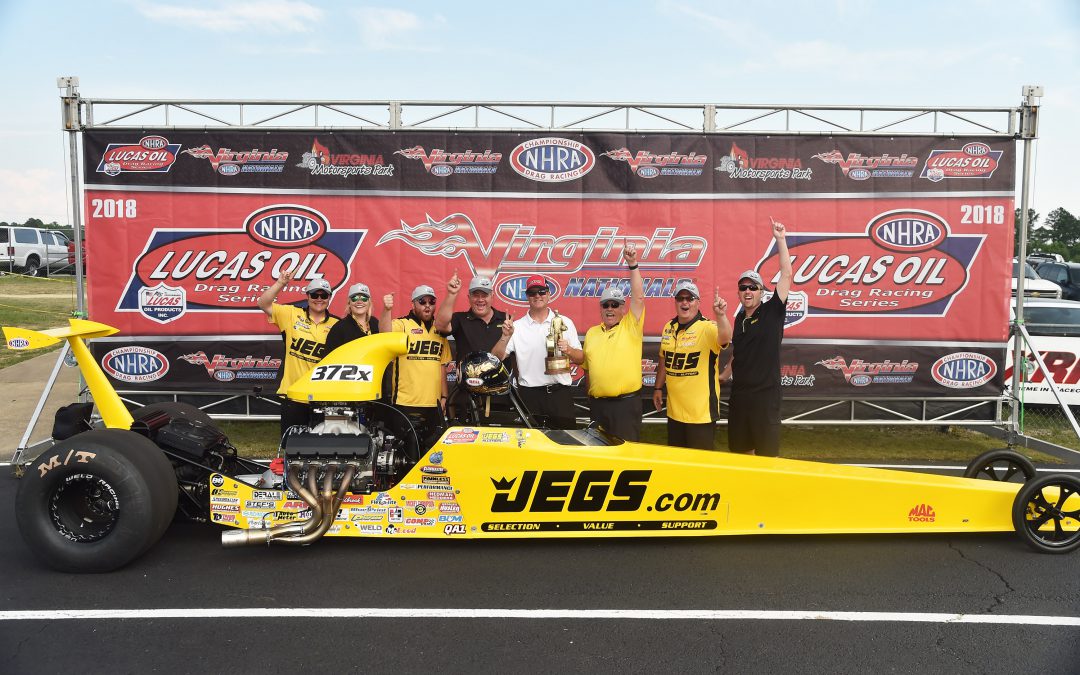 NORTH DINWIDDIE, Va. (June 10) – JEGS.com driver Jeg Coughlin Jr. added to his legendary resume by winning in Super Comp at the Virginia NHRA Nationals on Sunday at Virginia Motorsports Park for the 78th national-event victory in his career.

Coughlin Jr. won for the second consecutive weekend, following up his win in Pro Stock at Chicago. Of Coughlin's 78 victories, three have come in Super Comp, with the last at Las Vegas in 2012.

"It feels great to get a huge win last week in Pro Stock and come back this weekend and win Super Comp," Coughlin said. "It feels equally as good, without question. The Sportsman racers are a tough as any racers in the country and I take great, great pride in being able to race alongside them."

Coughlin won five rounds in the JEGS.com dragster before facing Rich Dorr in the Super Comp final. When Dorr went red, Coughlin secured the victory in a car usually driven by his wife Samantha.

"The car's been running well all weekend," Coughlin said. "Quite honestly, we struggled with it a little bit in Chicago, probably testing some things we shouldn't have, but it ran extremely well this weekend, and I think it's all set for her.

"What a day. Thanks to all of our folks back at JEGS that support us day in and day out, to the team here at the race track, Randy (Bishop) and Justin (Beaver)."

Coughlin couldn't go back-to-back in his JEGS.com Pro Stock Chevrolet, falling in the second round to Chris McGaha. Coughlin got off the starting line first but had to fight his car as it slowed to a run of 6.663 seconds at 208.46 mph, while McGaha ran 6.609 at 209.01 mph.

But Coughlin then jumped into the Super Comp car, ripped off a .011-second reaction time and beat Dave Long in the semifinals. Less than an hour later, he was back for the final and secured the win.

"It feels great today," Coughlin said. "Little (daughter) Carly, Samantha and my family are back home watching on live All-Access, which is just a great thing that NHRA gives us opportunities for. Thanks to my Pops and my brothers and everyone who supports us. It's going to be a fun night tonight.

"The fans here came out in grand style this weekend at Virginia Motorsports Park. We love them."