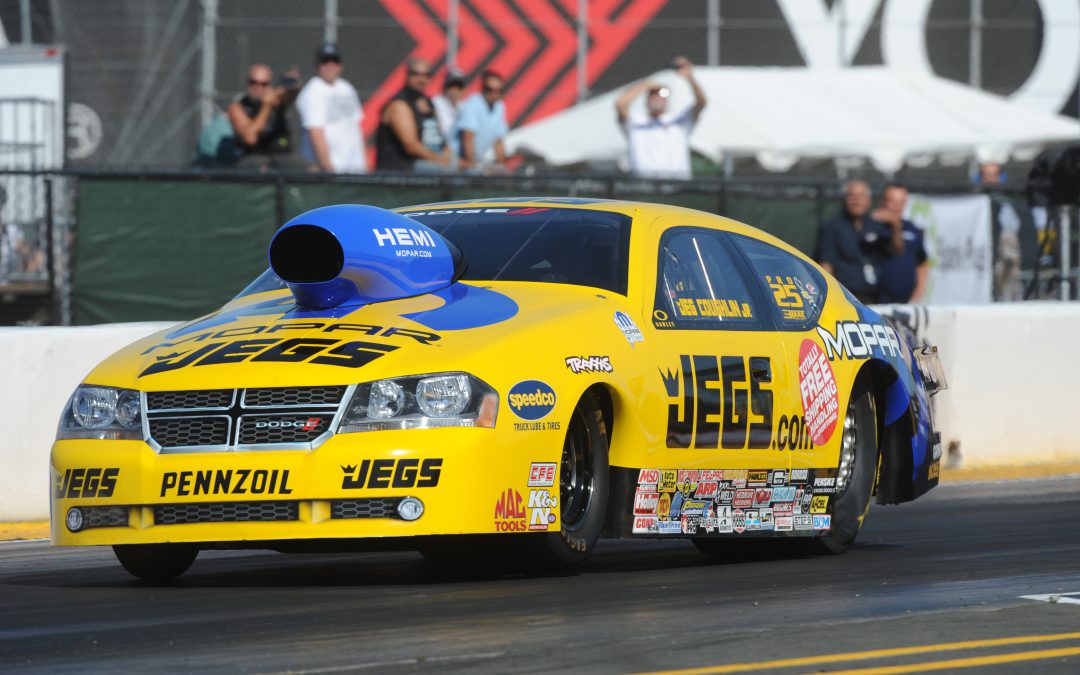 SONOMA, Calif. (July 27) – Jeg Coughlin Jr. has such a high amount of confidence in his JEGS.com/Mopar Dodge Avenger team that he won't let a sloppy weekend discourage him at the NHRA Sonoma Nationals at Sonoma Raceway.

The four-time Pro Stock champion qualified No. 7 this weekend, making his best pass of 6.557 seconds at 211.30 mph in Saturday's early afternoon session. Coughlin had qualified in sixth or better in 13 of the 14 races before Sonoma, so a No. 7 might bother other drivers.

"Sometimes you have to inflate your confidence meter yourself, and sometimes it gets inflated for you," Coughlin said. "This is one where we'll inflate it based on the talent we've got working on the car. We really only made two good runs out of the four in qualifying, but I feel great. This isn't our first rodeo. The car is drivable, and I was .026 (on the Christmas Tree) on the last hit, so I should be good tomorrow.

"I do believe in my heart that we will have a better race car E1 tomorrow than we've had all four rounds, there's just no question about it."

Coughlin will line up against Rodger Brogdon in the first round of eliminations Sunday, as Brogdon qualified No. 10 with a pass of 6.568 seconds at 210.90 mph.

"We're probably going to change motors going into tomorrow," Coughlin said. "The main thing is we're going to look at the chassis and just make sure we've got that set up right. That's key, going straight and going efficient in low gear. If we do that, we're going to have a pretty tough hot rod. I feel like between the whole team, we'll be able to get that accomplished."

Getting the Avenger hooked up has been difficult this weekend, as Coughlin has had issues on almost every run. He was fifth after Q1's pass of 6.591 seconds at 210.64 mph, but in Friday night's Q2, which saw the best track conditions, Coughlin had to push the clutch in early.

"Coming into today, we wanted to make sure the car did not go right. It still favored a hair to the right. In Q3, we weren’t aggressive enough and we were a little too slow down low in 60 foot, but we were the first car out. We didn't want to step on our toes. We felt like our toes were already a little swollen from last night."

That's when Coughlin made his best pass of the weekend, though he figured the car would go quicker in the final session.

"We made a nice A-to-B run and moved up from 11th to seventh," Coughlin said. "We came out for what would be considered the heat of the day run (for Q4) and really felt like we could run a high .53, low .54. The car just picked the front end up and marched a little bit left. I short-shifted first a little bit, yanking it hard back in the groove, and I was along for the ride after that."

Now, the JEGS.com/Mopar Dodge team will go back to work, trying to figure out what the car needs for Sonoma success. And Coughlin has every confidence in them.