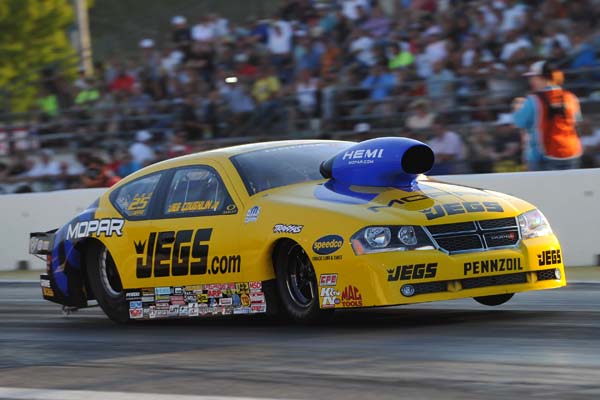 The Chicago winner a week ago stumbled in the second round in Norwalk, dropping a close match to fellow Dodge driver Vincent Nobile.

"Nothing to hang our heads about but we feel like we let one go," Coughlin said. "With Vincent running a .65 we should have been able to run at least a .62 and that would have gotten the job done."

"We ran pretty well first round and felt like we had some room to tidy some things up," Coughlin said. "We were the fourth-fastest winner of the first round, and that put us first pair. That has kind of been one of our Achilles heel a lot of the year, just not having a good setup for running right after the fuel cars."

As close as the ultra-competitive Pro Stock class can be, sometimes being the first pair to run in a round can be a bit of a handicap. But Coughlin, who remained third in the Pro Stock points standings, would make no such excuse.

"I don’t think it should matter if you are fourth pair or first pair," Coughlin said. "We will analyze the data and we will not be first pair every time. We will educate ourselves on how to make this car run when we know we have 75 minutes to prepare to be first pair.

"We just missed it, plain and simple. We win as a team we lose as a team. We just want to make it better, faster and more efficient, and when we do all that we will turn the win light on."

"We just need to make better calls back in the pits to accelerate and use that track well," Coughlin said. "We made a bit of a change from first round to second round but not enough."

Coughlin now turns his attention to the Mopar Mile-High NHRA Nationals on July 19-21 at Bandimere Speedway.

"We will transition our thoughts on going to Mile High," Coughlin said. "We are going to test there Tuesday and Wednesday. A.J and Roy (Johnson) have a killer setup on the mountain.

"Hopefully we can get my car in good shape right off that bat and make some test runs and be ready for the race the following week."