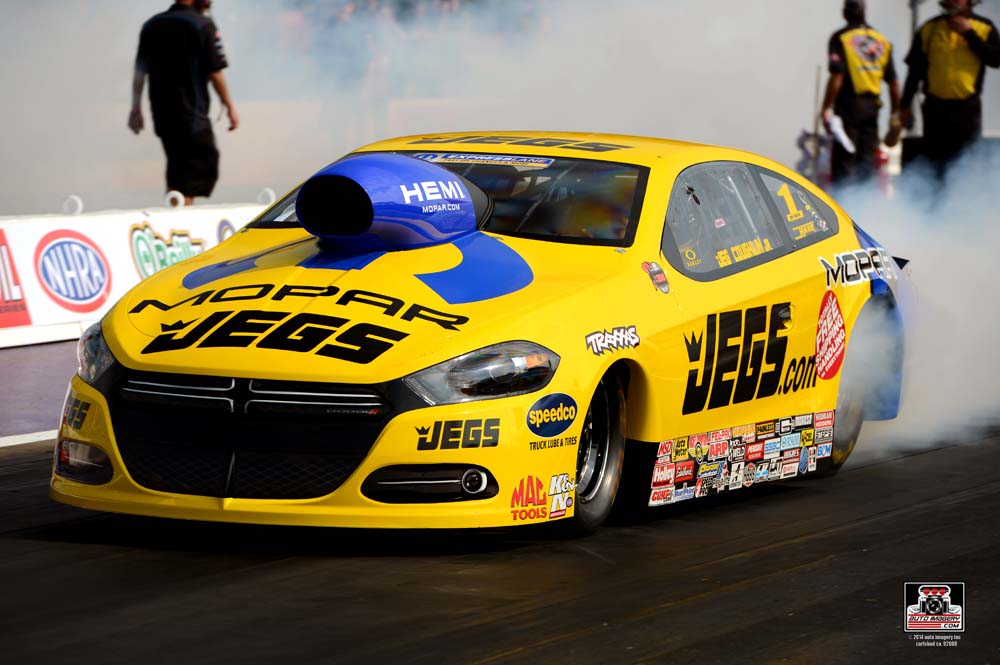 HOUSTON (April 26) – If JEGS.com/Mopar Dodge driver Jeg Coughlin Jr. needs any proof that he has one of the best cars in the Pro Stock class at Royal Purple Raceway this weekend, he needs only to look outside his hauler.

The No. 1 qualifier in Pro Stock, Allen Johnson, sits inches away from Coughlin in the J&J Racing pit area. So on Hemi Day – 4/26 – Johnson qualified No. 1 and Coughlin No. 6.

"It's exciting to see Allen running as well as he is and stepping up to get the pole," Coughlin said. "It's good for the team, without question."

Johnson's Dodge Dart made a run of 6.555 seconds at 211.63 mph, while Coughlin's Dart had a best run of 6.592 seconds at 210.47 mph. The cars are virtually identical, so Coughlin's team members were scratching their heads in their attempt to coax more speed out of the JEGS.com/Mopar car.

"We've been struggling with my car just a little bit," Coughlin said. "It's just not putting out the speeds like we're looking for, and with speed, typically comes ET. But the entire team's been working on it, trying to fine-tune it and get it a little bit happier."

Coughlin's team made some adjustments for Q4, and ran in some of the warmest conditions of the weekend, and the car responded with a run of 6.601 at 210.21 mph.

"It felt a little bit better that last run," Coughlin said. "Roy Johnson and the (engine) guys were doing some tuning, and we're finessing on the car side of things. We feel like we've got a good-enough car to do some damage tomorrow."

Coughlin, Anderson and the entire Pro Stock class has chased changing track conditions, as each session saw different weather. Q1 was run in the heat of the day Friday, while Q2 was cooler on Friday night. Saturday's Q3 was run under cloudy skies, while Q4 was much warmer.

"Typically, we like the changes in attitude of the weather," Coughlin said. "The changes of the cloud cover and the way the track is make the crew chiefs really work for it. Mark Ingersoll and Adam Hornberger do a really nice job at that, so I like it when the weather fluctuates a little bit.

"You can see all the smoke coming out of the Pro Stock pits from all the crew chiefs analyzing and thinking and trying to get that right setup.

"I'm ready to see this thing get tuned up a little bit more and stay sharp behind the wheel and do what we love to do."