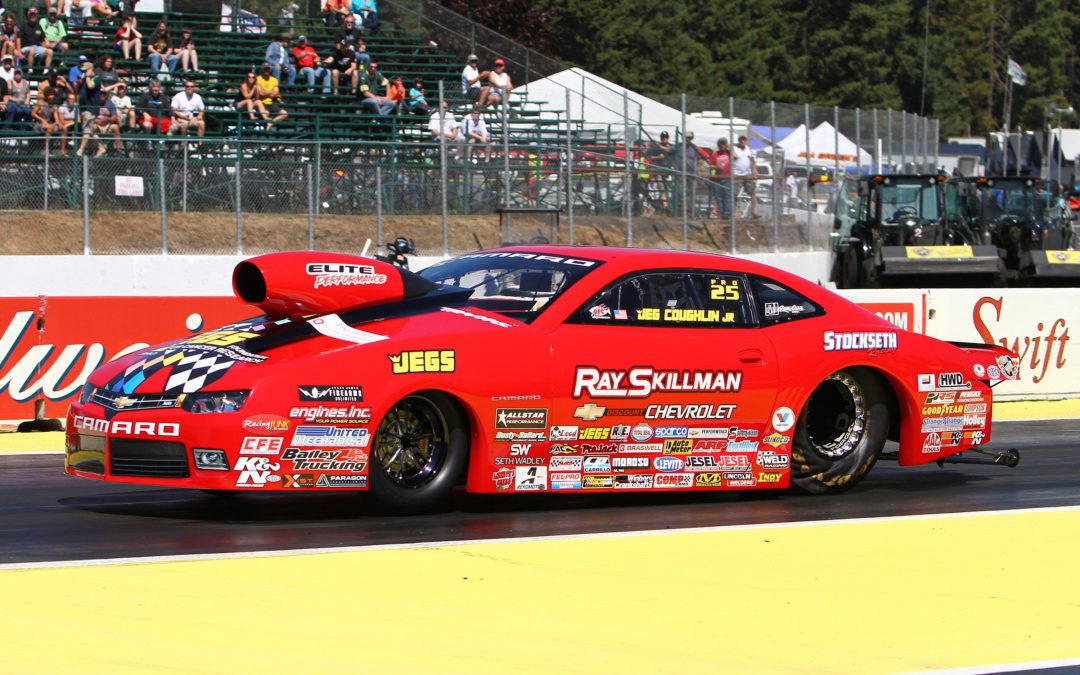 SEATTLE (Aug. 8) – JEGS.com driver Jeg Coughlin Jr. missed his 21st career No. 1 qualifier in Pro Stock by less than one-thousandth of a second, but he's still in a good spot to contend for his 75th career NHRA victory – and 59th in Pro Stock – when he races in the NHRA Northwest Nationals on Sunday at Pacific Raceways.

Coughlin, driving the Stockseth Racing/Elite Motorsports Chevrolet, ended up No. 2 on the chart even though he tied Chris McGaha with an elapsed time of 6.501 seconds. McGaha earned the No. 1 qualifier with a slight faster speed, 212.86 mph to 212.59 mph.

"The ultimate goal is to be No. 1," Coughlin said. "This team certainly deserved to be on top the way they've been thrashing since I've been on board the last two weeks. They're real smooth operators, and I've really enjoyed working beside them and with them. No. 1 would've been fantastic for them."

Coughlin, though, is philosophic about being No. 2, and he has reason to be: He is the only NHRA professional driver to win from every qualifying position.

"We'll go into Sunday qualified No. 2, and that's a great spot to be," Coughlin said. "We've got one bad hot rod here, and it's a matter of making the right calls in the pits and doing what I love to do. We'll see if we can turn some win lights on."

Coughlin squares off against Aaron Strong in the first round of eliminations Sunday. Strong qualified No. 15 with a pass of 6.618 seconds at 208.81 mph.

But while Coughlin's Chevy may have a slight performance advantage on the upstart Strong, the Pro Stock field is extraordinarily tight this weekend. The top eight are separated by less than a thousandth of a second, with the top 11 are separated by .022 seconds.

"Look at this field: We're packed in there as tight as can be," Coughlin said. "I'm fortunate to have such a great ride underneath me and such a great team behind me. I feel great behind the wheel, and game day can't come soon enough. I think we've got something for 'em, without question, and that's what we're here for."

Coughlin was also racing his JEGS.com '66 Chevy II station wagon in the Super Street class, but after winning two rounds, he dropped a close match in the third round Saturday. Coughlin had a stellar .016-second reaction time, but his opponent, Tony Hopkins, was .003 better, and Hopkins then ran within .019 seconds of his 10.90 dial to score the victory.