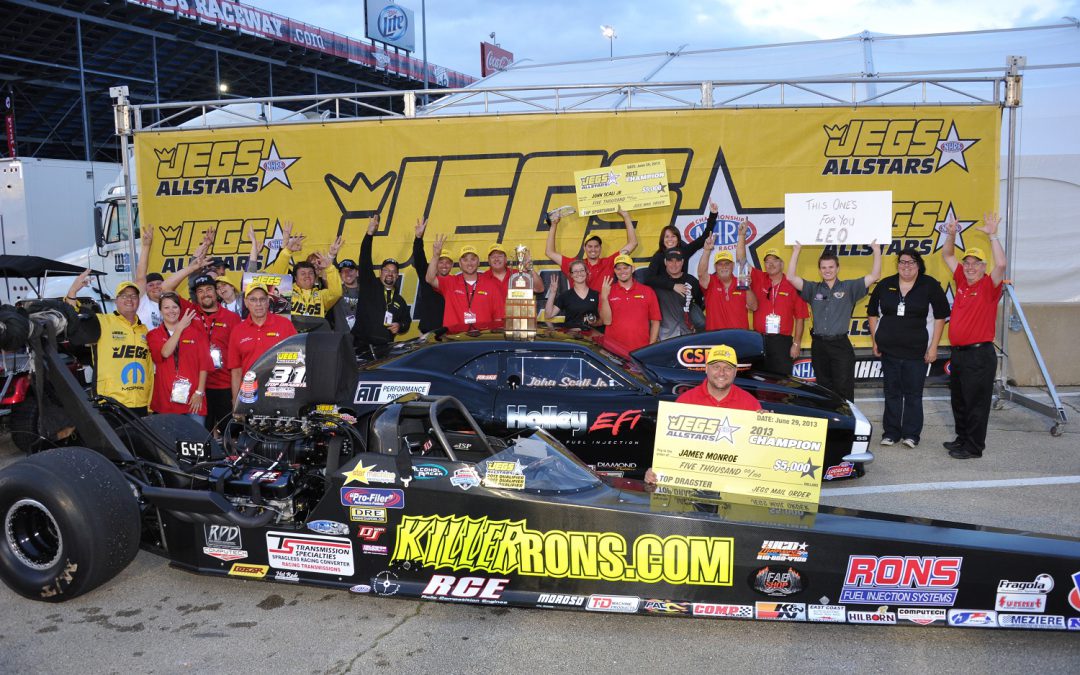 CHICAGO (June 24) — An incredible field of the best NHRA Lucas Oil Drag Racing Series drivers from across North America will converge at Route 66 Raceway this weekend for the 30th annual JEGS Allstars competition.

This year's field includes 79 drivers representing 33 U.S. states and two Canadian provinces. The group will compete for individual and team honors and a share of more than $120,000 at stake during the event, which will once again be held in conjunction with the Route 66 NHRA Nationals. Of special note, each qualifier and the 10 champions will be rewarded a newly designed trophy handcrafted by master sculptor Dan Dreisbach of Naked Sculpture.

When NHRA announced two years ago that Top Alcohol competition would be divided among four regions rather than the traditional seven divisions, JEGS immediately devised a plan to keep the popular cars in the Allstars competition. As a result, Top Alcohol teams will compete for a special "regional" trophy, also designed by Dreisbach.

The Northeast Division team is tied with the North Central team with seven overall wins and will be looking to break that tie against a team anchored by world champions Frank Aragona Jr. (Comp), Byron Worner (Super Stock), and Ray Sawyer (Super Gas).

A solid South Central Division team includes Slate Cummings, who is racing in two classes (Super Stock and Stock) for the third straight year, and Super Comp rep Austin Williams, who is perhaps the hottest Sportsman driver in the country this season. Past world champion Jimmy Lewis also gives the South Central Division team a hope of collecting another overall championship.

Amazingly, the West Central Division team has never won the JEGS Allstars overall title but has the manpower to do so this year as their impressive lineup includes world champs Bruno Massel Jr. (Comp), Gary Stinnett (Super Comp), and Phil Unruh, who is making his second straight appearance in the Top Dragster class.

The team from the Northwest Division has a lot to prove after scoring just 300 points in last year's competition. A repeat would be almost unthinkable because the 2014 team includes veteran Comp driver Ralph Van Paepeghem, Joe Sorensen (Super Stock), and Casey Plazier (Stock). Historically, the Northwest Division has won two overall JEGS Allstars team titles (1988 and 2005).

The squad from the Pacific Division, who claimed the 2012 overall title, will be looking to regain the top spot, and there is no reason to think it can't with a team that features reigning NHRA world champions Alan Ellis (Comp), Justin Lamb (Stock), and Rick Beckstrom (Super Gas).

While the JEGS Allstars is a highlight competitive event, camaraderie between racers and their crews is evident, especially during Friday evening's racer appreciation barbecue, which is open to all of the JEGS Allstars competitors, their families, and crews.