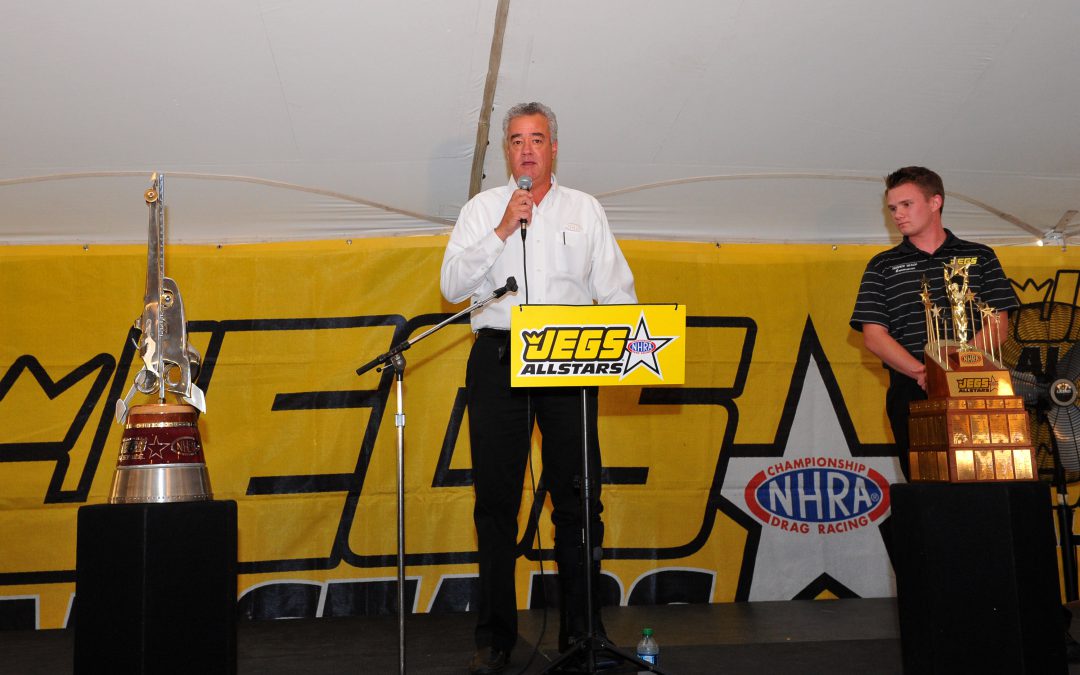 JOLIET, Ill. (June 29, 2013) – JEGS Automotive, Inc., has extended its agreement with the NHRA as title sponsor of the JEGS Allstars event, it was announced today.

The extension will keep the JEGS name on the race-within-a-race bonus program for the best of the best NHRA Lucas Oil Drag Racing Series competitors through 2016.  JEGS has been the title sponsor since 2002 and in that time, the JEGS Allstars event continues to be one of the most anticipated events during the season where individual and team bragging rights are at stake.

“JEGS is excited to renew our support of the JEGS Allstars race,” said Scott Woodruff, director of media and motorsports at JEGS. “Having the best of the best compete from coast-to-coast each year is something we look forward to as a company. The Coughlin family takes great personal pride in this special event. John, Troy, Mike and Jeg Jr. have all competed in the event and I know it's something third generation driver Troy Jr. is gunning for.”

“It’s the racers, JEGS and the NHRA that have helped to make the JEGS Allstars Race what it is today and what it will be tomorrow,” Woodruff continued.  “JEGS is honored to help elevate NHRA Lucas Oil Sportsman racers by putting them on this prestigious stage.”

The JEGS Allstars event pits the top points earners from NHRA’s seven geographic divisions in the NHRA Lucas Oil Series against each other in the culmination of a year-long points battle.  Earlier this year, NHRA announced the formation of the JEGS Allstar Top Alcohol Regional Team Championship, which consists of four regional teams (East, North Central, Central and West) comprised of the top two points earners in Top Alcohol Dragster and Top Alcohol Funny Car, making up a four-car team.   Lucas Oil Drag Racing Series competitors in Comp Eliminator, Super Stock, Stock Eliminator, Super Comp, Super Gas and Super Street, along with competitors in Top Sportsman and Top Dragster, vie for team and individual honors and a share of the $119,000 purse.  The extension calls for an increase in total purse to $124,000 beginning in 2014, when the newly formed Top Alcohol Regional Team Championship will include an additional $5,000.

Next year will mark the 30th anniversary of the JEGS Allstars event, which is contested at the O’Reilly Auto Parts Route 66 NHRA Nationals at Route 66 Raceway near Chicago.   The event is televised on ESPN2 as part of the NHRA Lucas Oil Drag Racing Series show. The winning team splits $20,000 and the winners in the Top Alcohol Dragster and Top Alcohol Funny Car categories earn $7,000 each, while the winners in Competition Eliminator and Super Stock earn $6,000 each. Top Sportsman and Top Dragster winners earn $5,000 and Stock, Super Comp, Super Gas and Super Street winners earn $4,500. Runners-up in all categories get $2,000.

“We’re very excited to extend our relationship with JEGS Automotive through the year 2016,” said Gary Darcy, senior vice president, sales and marketing, NHRA.  “JEGS has always had a strong commitment to NHRA and sportsman racing and through this extension will be the title rights sponsor of this very important program for 15 consecutive years and we will work together to celebrate the 30th anniversary of the all-important program in 2014.”

JEGS Automotive, Inc., with world headquarters in Delaware, Ohio, is a leading supplier of automotive and auto racing parts and equipment.

JEGS was founded in 1960 by Jeg Coughlin Sr. in an effort to supply the growing needs of customers throughout the Midwest. In 1986, JEGS became a leader in the high performance mail order business when the Coughlin brothers (John, Troy, Mike & Jeg Jr.) purchased JEGS with the assistance of their father. JEGS is a leader in the aftermarket high performance business and has grown into a multi-million dollar company.