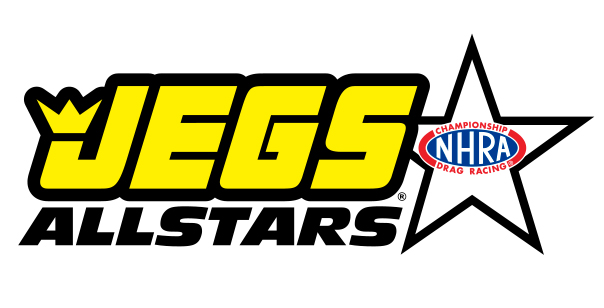 GLENDORA, Calif. (Oct. 25, 2016) – JEGS Automotive, Inc., has extended its agreement with the NHRA as title sponsor of the JEGS Allstars event, it was announced today.

The extension will keep the JEGS name on the race-within-a-race bonus program for the best of the best NHRA Lucas Oil Drag Racing Series competitors.  JEGS has been a long time title sponsor since 2002 and in that time, the JEGS Allstars event has continued to be one of the most anticipated events during the season where individual and team bragging rights are at stake.

“JEGS couldn’t be more excited to extend our longtime support of the JEGS Allstars race. Our goal from day one has been to exceed the expectations of the NHRA sportsman racing community in the same way JEGS exceeds the expectations of millions of customers worldwide each year,” said Scott Woodruff, director of media and motorsports at JEGS. “The JEGS Allstars race is the most prestigious event in the NHRA Lucas Oil Drag Racing Series to qualify for and win. We have made this event better and better each year with the support of NHRA and input from the NHRA sportsman racers. We are committed to seeing this event soar to new heights in 2017 and beyond.”

The Divisional Team Champion will split $20,000 and the winners in the Top Alcohol Dragster and Top Alcohol Funny Car categories earn $7,000 each, while the winners in Competition Eliminator and Super Stock earn $6,000 each. Top Sportsman and Top Dragster winners earn $5,000 and Stock, Super Comp, Super Gas and Super Street winners earn $4,500. Runners-up in all categories get $2,000.

In addition, Top Alcohol Dragster and Top Alcohol Funny Car contestants will compete in the Regional Team Championship for their chance at an additional share of $5,000. The West Region will look to repeat as Regional Champions after winning in 2016.

“The JEGS Allstars event is one of the most hotly contested events during the course of the year for the NHRA Lucas Oil Drag Racing Series competitors,” said Brad Gerber, NHRA vice president, and chief development officer. “The intense action between the individual racers is only slightly overshadowed by the amount of pride that comes when the entrants can say their Division came out on top in the points battle.”

JEGS Automotive, Inc., with world headquarters in Delaware, Ohio, is a leading supplier of automotive and auto racing parts and equipment.  JEGS was founded in 1960 by Jeg Coughlin Sr. in an effort to supply the growing needs of customers throughout the Midwest. In 1988, JEGS became a leader in the high performance mail order business when the Coughlin brothers (John, Troy, Mike & Jeg Jr.) purchased JEGS with the assistance of their father. JEGS is a leader in the aftermarket high performance business and has grown into a multi-million dollar company.