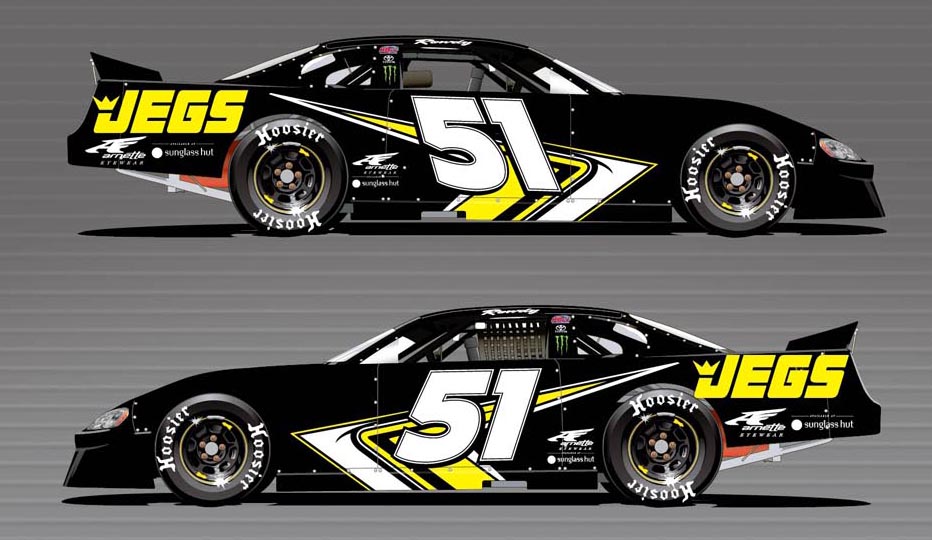 JEGS.com, a longtime partner of NASCAR, Speed51.com and short track racers across North America, will adorn the No. 51 Toyota that Busch will pilot at South Boston – a car specially built for the event at his Kyle Busch Motorsports shop in Mooresville, North Carolina.

"We're excited to have JEGS involved with Kyle Busch for the Denny Hamlin Short Track Showdown," said John Coughlin, co-owner of JEGS.  "Kyle's pretty much the best racer you can find.  He's won the race three times and he's got a great shot to do it again this time.

"Plus, life is all about relationships.  Since my son Cody joined with Joe Gibbs Racing, Kyle has been a great friend and resource for him.  They talk a bunch and we've had a great relationship with Kyle, JGR, KBM and all the people involved in putting this together.”

Busch is the defending winner of the Denny Hamlin Short Track Showdown, as well as the winner of the event's first two editions in 2008 and 2009.  That kind of track record means fans won't have to look far from the front of the field at South Boston to see the yellow and black JEGS.com colors of Busch's No. 51 Late Model.

The car Busch will pilot is the latest creation from the Kyle Busch Motorsports chassis shop and the same Camry which Busch led 67 of the 75 laps en route to victory in the 2013 Short Track Showdown.  KBM, utilizing parts ordered with free shipping and handling from JEGS.com, has been developing state-of-the-art Late Model Stock Car chassis for several seasons.

“After renting cars for the Showdown for a few years, last year we decided to build the first-ever Late Model out of the KBM chassis shop," said Busch.  "The guys did an awesome job with it and all of their hard work paid off as I was able to get my first win in the event since they moved it from Southside to Richmond. This year we’re bringing that same Camry to South Boston and we expect it will be fast and reliable again — just like the parts and service you get from JEGS.com.

“I’ve only raced at South Boston a handful of times and it’s definitely been a few years.  I finished I think 10th there when I was racing on the ASA National Tour in 2002 and I also ran the Mason-Dixon Meltdown for a team back in 2006, had a fast car but we had a motor issue in the feature.  It’s a really nice facility that has a lot of rich racing history. The fan support has always been really good there and I think it will be a great venue for this event.  Looking forward to hopefully ending the night with the JEGS.com Camry in victory lane and picking up my fourth win in Denny’s event at the third different venue.”

"JEGS has prided itself on supporting many charitable efforts through the JEGS Foundation," added Coughlin.  "Being a part of Kyle's efforts at the Denny Hamlin Short Track Showdown is just another extension of that.  We at JEGS hope to see the JEGS.com No. 51 in victory lane and smiles on everyone at the track knowing their efforts went towards a good cause."

After splitting its previous editions between Southside Speedway and Richmond International Speedway in Virginia, this year's Showdown will take place at one of the most historic short tracks in the country, South Boston Speedway in South Boston, Virginia.  The challenge of South Boston and the talented field that he will be competing with means Busch will have his hands full as he chases a fourth Showdown victory.

“I really enjoy racing against other NASCAR drivers like Denny (Hamlin) and Matt (Kenseth) in a different type of vehicle and then when you add in some of the guys that race these cars every weekend like Lee Pulliam, Peyton Sellers and C.E. Falk aiming to beat us it makes for an exciting event for the fans.  And in the end it’s all for a good cause because it raises a lot of money to help out with research in the fight for people with Cystic Fibrosis."

Advance tickets for the Denny Hamlin Short Track Showdown can be purchased at the South Boston Speedway box office or by calling 1-877-440-1540.

For more on JEGS.com, follow JEGS Performance on Facebook, @JEGSPerformance on Twitter and be sure to check out the web's largest inventory of high-performance auto parts, all with free shipping and handling, by visiting JEGS.com.