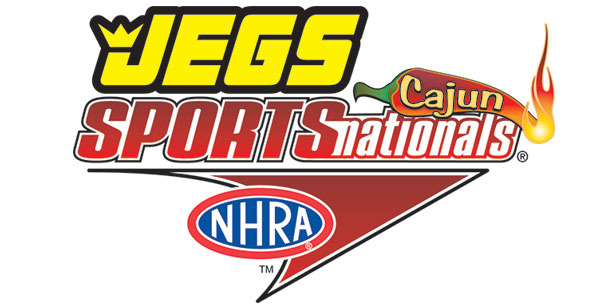 There will also be numerous specialty races, including the Moser Shootout and "King of the Bayou," for drivers in Super Comp, Super Gas, and Super Street, and a very special "Hemi Chootout" to honor the memory of longtime Super Stock racer and Louisiana native Tim Hebert.

The JEGS SPORTSnationals series will feature the popular heads-up class racing in Stock and Super Stock; National event champion points; National event contingency payouts; $400,000 cash and contingency postings; and a host of special features, some of which will be unique to each of the events.

The champions of the 12th annual JEGS NHRA Cajun SPORTSnationals will be in line for possible bonus in the form of the coveted JEGS Crown trophy. The prized award is a special trophy handcrafted by Dan Dreisbach of Naked Sculpture, and is awarded to any driver who can win the same class in two of the three JEGS SPORTSnationals events in a given season.

Among the many special events on tap at this year’s event will be the Moser Sportsman Shootout for racers in the South Central Division. On Saturday, a select group of racers in Super Stock, Stock, Super Comp, Super Gas, Super Street, Top Dragster, and Top Sportsman will race in head-to-head competition for a share of more than $15,000. The top prize is $5,000 with an additional $2,000 awarded to the runner-up. The Moser Shootout races are unique because they pit drivers from different classes in a single eliminator, using a handicap start and a breakout rule on an eighth-mile in an effort to insure parity.

The second annual Tim Hebert Hemi "Chootout" also will be contested during the Belle Rose event. Hebert was a long time NHRA racer who passed away suddenly at age 53 on June 2, 2013. Hebert’s ’68 Hemi Barracuda has been seen at NHRA events for decades and will be participating in the "Chootout" with his son Rory at the wheel. The "Chootout" will be held during Friday’s class eliminations. The Division 4 Good Guys: Southland Dodge (Joe Teuton), Steve Kent Services (Steve Kent), Paillot Bros. Construction (Joe & Jerry Paillot), Engines Inc. (Lloyd Wofford), Henson Family Dealerships (Fred Henson), 3001 (Stephen Hebert) and NPR are proud sponsors of the event. The tribute race is expected to attract one of the largest gatherings of vintage '68 Hemi Dart and Barracuda factory race cars in the country.

While the on-track racing at the JEGS Cajun SPORTSnationals is second-to-none, so is the after-hours action which includes cookouts and other get-togethers designed to promote off-track camaraderie. To that end, No Problem Raceway Park continues its tradition of not only producing first-rate events for NHRA Sportsman racing, but also hosting a weekend-long party that includes plenty of Cajun food-fests and other Southern-style celebrations.